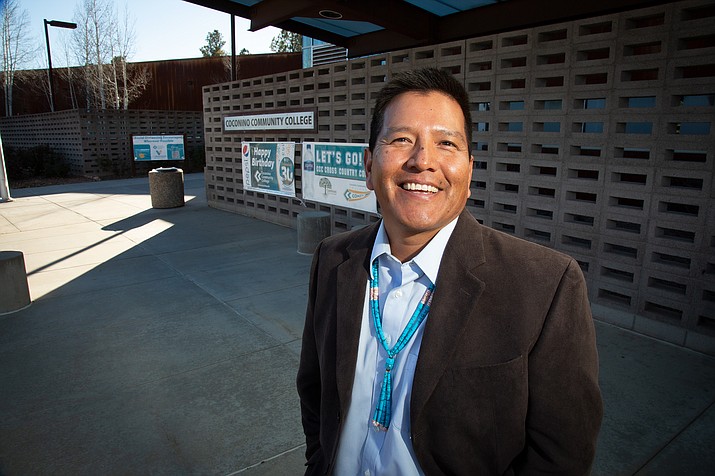 Brian Francis, manager for the Strengthening Indigenous Student Success project at Coconino Community College, stands outside the Lone Tree Campus, where one of the project’s Native American Success Centers will be located. The project was made possible after CCC was awarded a $2.1 million, five-year Native American-Serving Nontribal Institution grant from the U.S. Department of Education. (Photo/Larry Hendricks)

FLAGSTAFF, Ariz. — One in five students at Coconino Community College is Native American.

Often, the Native American students who arrive at CCC are the first in their family to pursue a college education and may also come from challenging economic situations. As a result, they may face barriers in obtaining a college degree.

In an effort to increase Native American student course success, completion rates and a sense of belonging in the college community, CCC has received a $2.1 million grant from the U.S. Department of Education. Called the Native American-Serving Nontribal Institution (NASNTI) grant, the funds will be distributed over a five-year period.

“CCC values the sacred land on which we live and serve and the indigenous peoples who have inhabited it for centuries,” said CCC Provost Dr. Nate Southerland. “One in five students at CCC is Native American, and we look forward to providing these students with culturally responsive teaching, enhanced support, and interpersonal connections to help them be successful in their studies.”

According to a 2015 study by Northern Arizona University, the median household income on the Navajo Nation was $25,827, with 42 percent of tribal members falling below the federal poverty line. And with regard to education, there is a continual gap in high school completion and college-going rates between Native Americans and other demographic groups in Coconino County.

According to the 2019 American Community Survey, 82 percent of Native Americans in the county have graduated from high school compared to 98 percent for non-Hispanic Whites.

Additionally, the survey states that only 8 percent of Native Americans in the county have a bachelor’s degree or higher, while 55 percent of non-Hispanic Whites do. Finally, when Native American students do enroll at CCC, they experience lower levels of course success and degree or certificate completion than non-Native students – particularly in the foundational English and math courses.

The project will get underway in January 2022.

The intent, Francis added, is to approach education from a Native American perspective by including ideas of home, of youth, of teaching, and of extended family into the educational process.

The project will contain three main elements to achieve the goals. The first is the establishment of Native American Success Centers at the Lone Tree Campus in Flagstaff and at the Page Center in Page. There will be a dedicated space at the two locations specifically for Native American students. Each center will also have textbook and technology lending libraries for the students.

“It’s creating a sense of home away from home,” Francis said, adding that each Native American Success Center will be staffed with advisors, peer mentors and tutors. “It’s an extended family model, just like back home.”

The project will also contain a Summer Bridge program, that will offer, at no cost to the students, an eight-week experience for new Native American students — 40 in Flagstaff and 20 in Page. The bridge program will have the students take a college English composition class and a college success skills class for a total of six credits. Tutors and peer mentors will help the students. The students will also work with advisors to create an academic roadmap. They will apply for financial aid, register for classes.

The third element will include a professional development component, which will deliver, over the period of the project, 150 full and part-time faculty trained in culturally responsive teaching methods. Faculty will incorporate strategies and tools into their course syllabi and teaching practices.

To round out the project, Francis said that CCC will convene a Native American Advisory Board, made up of indigenous community leaders, tribal elders and CCC staff to advise the president and the provost during the course of the project.

Francis has had experience with the NASNTI grant. Before his arrival at CCC, he worked at Fort Lewis College in Durango, Colo., which had been a recipient of the grant and had positively impacted the success rates of the Native American students there. Now, CCC gets that chance.

“I feel like we planted the seed,” Francis said. “Now it’s started popping out of the ground and now is the opportunity to start growing it. It’s going to be for Native students, but I want everyone in the college involved in the project, and I’m excited about that.”

Larry Hendricks is the senior manager of public relations and marketing at Coconino Community College.