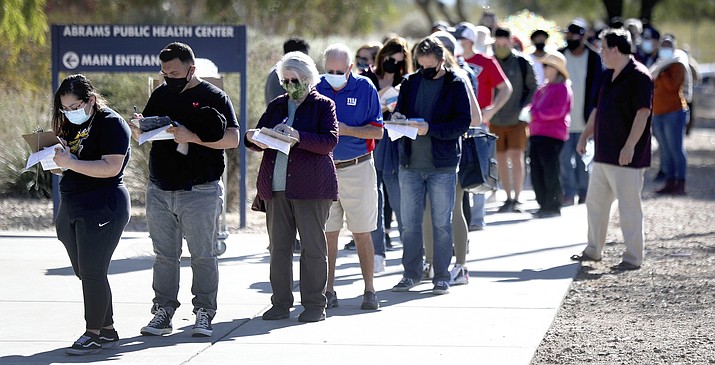 Hundreds of people fill out paperwork while waiting to get free COVID test kits at the Pima County Health Department Abrams Public Health Center in Tucson Jan. 4, 2022. The line for the kits stretched around all four sides of the building from the start of the afternoon's distribution. (Kelly Presnell/Arizona Daily Star via AP)

The Republican governor on Tuesday announced a program to give private school vouchers if their children's schools close or move to remote learning. He's using federal coronavirus relief funds, despite warnings from the U.S. Treasury Department that two earlier school programs he created are not allowed under the American Rescue Plan Act.

Ducey is tapping $10 million in relief funds to give parents up to $7,000 a year to pay tuition and education costs. Applicants can earn up to 350% of the federal poverty level — $92,750 for a family of four.

No Arizona public schools have announced plans to close or return to remote learning, but the president of the state teachers union said Tuesday it may happen if enough staff are sidelined by illness.

"If we continue to see omicron spread like it's been spreading then you eventually will be facing the same things that restaurants and movie theaters and small businesses everywhere are going to be facing," Arizona Education Association President Joe Thomas said. "If you don't have enough healthy employees, you have to make some kind of change. And so that may be what they're trying to get out in front of."

Thomas said he was in no way advocating for school shutdowns, just advising parents about the realities they may face. A tweet he sent on Monday that said schools might have to close drew the ire of Republican gubernatorial candidate Matt Salmon. Salmon accused Thomas of pushing for closures and said he would ban hybrid learning and promote expansion of the state's private school voucher programs.

COVID-19 hospitalizations statewide have increased for the third straight day, with the state reporting 2,463 virus patients occupying inpatient beds as of Monday. Arizona's hospital association said the health care system was stretched thin and urged people to get vaccinated and to consider options for care like telephone consultations.

President Joe Biden on Tuesday said hat there's no reason to believe omicron is worse for children than previous variants and noted $130 billion in federal virus relief to keep schools safe and open.

The money is for testing, improved ventilation, distancing and other mitigation measures.

Ducey's program is effective as of Jan. 3 and the governor's website will have an application portal by later this week.

Ducey created a similar $10 million school voucher program for parents whose schools require masks or quarantines and touted it as a response to a hue and cry from parents. Despite over 2,500 applications, only 85 students are getting the vouchers and the state has paid out $595,000, Ducey spokesman C.J. Karamargin said Tuesday.

The governor in August also created a $163 million grant program only available to schools in high-income areas that do not have mask mandates.

Both programs run afoul of rules on spending federal virus relief money because they "undermine evidence-based efforts to stop the spread of COVID-19," according to the Treasury Department. Ducey rejected the Treasury demands in November and did not halt the programs.

A Treasury spokesperson said Tuesday that the department is monitoring uses of coronavirus relief funds and "expects any government that uses them in violation of the eligible uses to repay the misused funds to the federal government."

"The goal here is to give parents a lifeline in the eventuality that a school closes," Karamargin said.

Thomas called for the governor and the Legislature, which starts its 2022 session on Monday, to return to the pandemic's early days when schools could react to local conditions.

"They need to go back to their playbook when we started all of this, where they were giving districts flexibility," Thomas said,

Arizona on Tuesday reported over 7,000 additional confirmed COVID-19 cases for the fourth time in five days and over 150 more virus deaths as the spike keeps hospitals crowded statewide. The state has reported over 1.4 million cases and more than 24,500 deaths during the pandemic, according to the state's coronavirus dashboard.

Monday saw 14,192 additional cases, the most on a single day since January 2020, which reflected both the surge and lower reporting the day before because of the New Year's holiday.

"Like the rest of the country, Arizona is seeing a spike in COVID-19 cases as the Omicron variant spreads," the Department of Health Services said Tuesday on Twitte r. The increased use of at-home tests means there are likely more cases.

In northwestern Arizona, the Mohave County Board of Supervisors voted 3-2 for a resolution recognizing a public health crisis due to severe staffing shortages at hospitals in the county, a generally conservative area with low vaccination rates.

The declaration approved Monday reverses a December board vote rejecting a request by hospital officials to declare a state of emergency, Today's News-Herald reported.

Kingman Regional Medical Center CEO Will McConnell said the board's official recognition of the crisis will allow hospitals to make a stronger case for state and federal help with getting more nurses.