1972 ushered in post-termination era of change for U.S. tribes 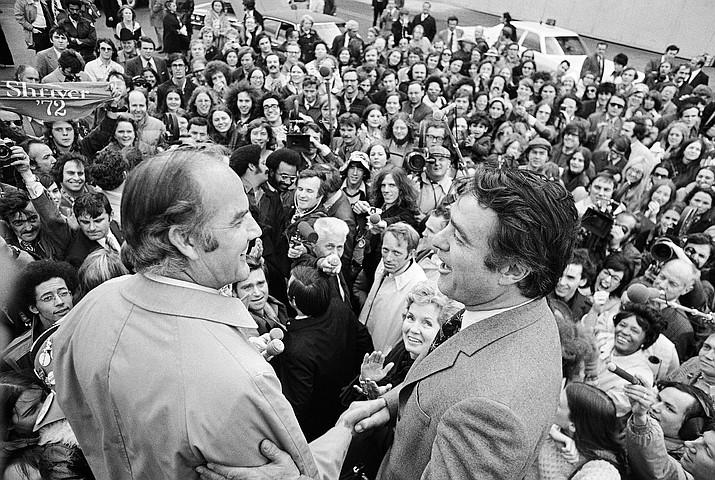 South Dakota Sen. George S. McGovern, left, is met by R. Sargent Shriver, his running mate on the losing Democratic ticket, and a crowd of well-wishers at Washington's National Airport in Arlington, Virginia on Nov. 8, 1972. McGovern and his wife, Eleanor, applauding at left of Shriver, returned to Washington from South Dakota where they spent Election Day. In 2022, Native American tribes are marking 50 years since the U.S. government's termination policy, considered an economic and human rights disaster, came to an end, making way for self-determination. More than 100 tribes were terminated under the policy, resulting in the loss of more than 1.3 million acres. (AP Photo/File)

"In the long run, I think we are on our way back at the same time the rest of American society is going down," he said in a 1972 interview."Almost any book you read today on the social movements analyzes the total disintegration of American society. So I look for American Indians to be the winners in the long run. We must recognize it is a long-distance run, and we've got to keep at it."

Of course, all our policy debates today have roots in the past — and 1972 was one of those years when so many Native issues broke through the surface.

This was the year the termination policy of the 1950s came to a jarring end. House Concurrent Resolution 106 in 1953 called for an end to federal services, reservations and "full citizenship" for tribal members. The policy was an economic and human rights disaster. More than 100 tribes were terminated, resulting in the loss of more than 1.3 million acres (526,100 hectares) impacting nearly 12,000 tribal citizens.

The Confederated Tribes of the Colville Reservation had elected new leadership that rejected termination and took on more authority. In 1972, the tribes closed lands on the reservation to non-Indians because of "littering and loitering." And it voted to take back law enforcement authority ceded in 1955 to the state.

In Wisconsin, Ada Deer was elected chairman of the board of trustees for Menominee Enterprises Inc. The company had been created under that tribe's termination legislation to control the assets. It was the beginning of the tribe's restoration. The entire Wisconsin congressional delegation signed on to the effort. The process would continue for the next several years and eventually lead to the enactment of the Menominee Restoration Act in 1973.

But the policy of termination was being replaced by self-determination.

Washington Sen. Henry Jackson, a Democrat and chairman of the full Interior and Insular Affairs Committee, proposed tribal self-determination as a policy in 1972. The measure, reflecting priorities from President Richard Nixon's Message to Congress in 1970, would have allowed tribes to contract directly with the Departments of Interior and Health, Education and Welfare to manage federal programs. Jackson said that approach would end the "disproportionate impact" of the federal government on tribal citizens' lives. It took three more years before self-determination became the law of the land.

On Jan. 15, 1972, representatives from six urban centers gathered in Oakland, California, to send a message that it was long past time for the country to serve urban Native populations. The Bureau of Indian Affairs responded to that conference by saying all federal funds would go to reservations.

John Folster, who was head of the Bay Area Native American Council, said the coalition was not out to fight the BIA, and "we don't want any money directed to the tribes — only other currently unappropriated funds for our own needs."

A couple of months later the National American Indian Council was formed by some 300 delegates representing 58 cities. The council met in Omaha, Nebraska, in March 1972 and called for the extension of federal services "for all Indians regardless of residence."

Lee Cook, Red Lake Ojibwe, president of the National Congress of American Indians, invited the new organization to join a broader coalition on Native issues. Under his leadership, NCAI revised its membership and included Native people living in cities. At one point, it explored the idea of a national framework that included city chapter membership.

In 1972, the Census Bureau estimated that 185,000 citizens of tribal nations lived in urban areas. Today, the Census figures about seven out of 10 Native Americans live in cities, topping more than 1 million people.

Richard LaCourse, Yakama, who was writing for the American Indian Press Association, said a "secret report" by the Interior Department recommended expanding eligibility of BIA services to the urban population.

The report was prepared by BIA leadership at the request of Rep. Julia Butler Hansen, D-Washington, chairman of the House Appropriations Committee. It recommended spending $46 million on urban programs, out of a BIA budget of more than $1 billion.

However, the Nixon administration's Frank Carlucci wrote Interior to say the "BIA's responsibility does not extend to Indians who have left the reservation." He said there were other federal agencies that could fill that role.

Carlucci had been the head of the Office of Economic Opportunity, the very agency he said should be supporting urban Indian programs. That agency spent "a meager $600,000" on such efforts, according to the American Indian Press Association.

ONE CLEAR PROMISE: AN INDIAN TO LEAD INTERIOR

U.S. Rep. Shirley Chisolm, D-New York, entered the presidential race in January 1972. She was the first African-American woman to run.

Chisolm promised to appoint a Native American to lead the Interior Department as well as involving tribal people in far more decision-making positions.

There were no Native Americans serving in the Congress in 1972, and most of the action in politics in 1972 was at the presidential level. Both the Republicans and Democrats had committees of supporters from tribal communities.

McGovern won his first Senate race in 1962 by a margin of 597 in a state with more than 30,000 Native voters. "That victory is being accepted now by his aides as an index of McGovern's indebtedness to his Indian electorate," the American Indian Press Association reported.

At the Democrat's convention in Miami, NCAI President Cook was nominated as a potential running mate for McGovern.

"No group of people, no nation has given so much and received so little as the Indian people and the Indian nation of this country," Cook told delegates.

The party platform called for a rejection of termination and the return of all surplus lands to American Indians.

The ballot for vice president at the Democratic National Convention at one point included more than 70 candidates. McGovern's pick, Missouri Sen. Tom Eagleton, didn't win his spot until early in the morning. He later withdrew from the campaign and was replaced by Sargent Shriver, a former Peace Corps director married to Eunice Kennedy.

Nixon's campaign for reelection focused on the administration's record.

"Our policy, as you know, is firm and unwavering: greater self-determination so that America's Indians can manage their own affairs," the president said in a message to tribal leaders. "We have returned certain lands to Indian people as one proof of our unbending intent that self-determination becomes a reality."

The 1972 election was a landslide. Nixon and Spiro Agnew carried 49 states and won the largest popular vote tally in history.

The policy debates in 1972 mask some of the other extraordinary stories from that year that we leave for another day, such as the return of Mount Adams in Washington, the murder of Raymond Yellow Thunder, the trail of Broken Treaties, and the legislation that defined the Navajo-Hopi land dispute.

Some of the policy proposals from 1972 came to be. Termination is no more. Self-determination continues to evolve. And the urban Indian programs are still largely underfunded. And in politics there is more representation than ever, including that half-century promise fulfilled for a Native Secretary of the Interior.