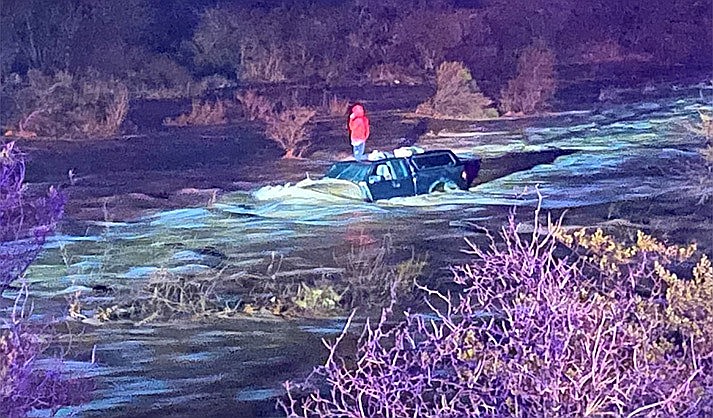 The sole occupant of a stranded vehicle was found standing on the roof when rescuers arrived. (Photo/CCFMD)

A small passenger vehicle was caught in swift water at a crossing on Kimberly’s Way near Cornville Road Dec. 24. The Copper Canyon Fire and Medical District (CCFMD), which was called at around 6:30 p.m., found the sole occupant on the roof of the vehicle, which had been swept about 300 feet downstream, according to CCFMD battalion chief Daniel Elliott.

While on the phone with the occupant, crews from CCFMD and Verde Valley Fire District worked to reach the vehicle.

The occupant was taken to safety and evaluated by emergency medical services, then was released to personnel from the Yavapai County Sheriff’s Office.

Drivers are reminded not to enter flooded washes, even if the water looks shallow enough to cross.