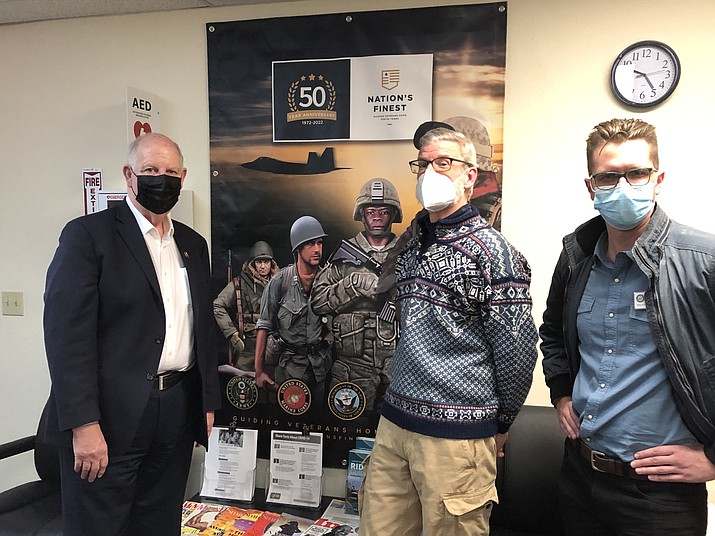 He presently represents those tribes in CD1, but Congressional maps were redrawn last week, as they are every 10 years.

The most recent map, approved by the Independent Redistricting Commission after months of hearings, may still face some legal challenges. Maps drawn by the Arizona redistricting commissions based on the 2000 and 2010 censuses both were challenged in court, the Associated Press said.

Earlier in the week, O’Halleran told the Navajo Hopi Observer, Navajo, Hopi and other tribes would receive more than $100 million each from the $1 trillion infrastructure bill that was signed into law by President Joe Biden Nov. 15, 2021, which will distribute money from the U.S Treasury over a span of 10 years for roads, bridges, transit, water systems and broadband.

“This will have a tremendous impact on Navajo and Hopi,” O’Halleran said.

Aside from the $100 billion of direct payments, tribes will also be able to apply for money to pay for broadband and other infrastructure projects.

The infrastructure bill also approved $2.5 billion for Indian Health Services, specifically for water and sanitation projects. The funding can be used for pipeline projects.

O’Halleran said more money for water that isn't specifically for tribes is available to tribes as well through the grant process.

O' Halleran said there should be guidance from the federal government within one to two months on how the money will be distributed and how it can be spent.

“They will setup guidelines and timelines,” he said.

O’Halleran said the Hopi jail construction project is moving toward a conclusion, although he didn’t give any specifics. He said there have been some issues and need for the new jail on Hopi is past due.

He said there have been some differences of opinion on the jail, but that most of those issues have been cleared up.

O’Halleran continues to support the proposed Build Back Better Act and says it will help people throughout the nation, including tribes.

He said the act would bring improvements in water, energy, mine clean up, jobs, education, forestry and tax credits for families with children who live in poverty.

O’Halleran said Build Back Better would create 7 million jobs with a lot of those jobs in rural and tribal areas.

“There is so much there,” he said.

He said getting elected in the new district will be tough, but he has never backed away from a tough race.

“This election will require a lot of doors knocked, many phone calls made and an all-encompassing voter turnout from Arizonans across our beautiful state,” he said in a released statement.

Additionally, O’Halleran said he wants to continue to build on his bipartisan work while representing families in the district.

His goals remain to lower health care costs, honor veterans, invest in infrastructure, protect the sovereignty of tribal communities and stand up against attacks on democracy.

O’Halleran said although the district is changing, rural Arizona remains intact as families in rural Arizona have different backgrounds but continue in their maverick spirit.

He said that he and his staff will remain dedicated to serving families who were in CD1 and moved into other districts by the redrawn map. His office remains open to those families who need assistance.