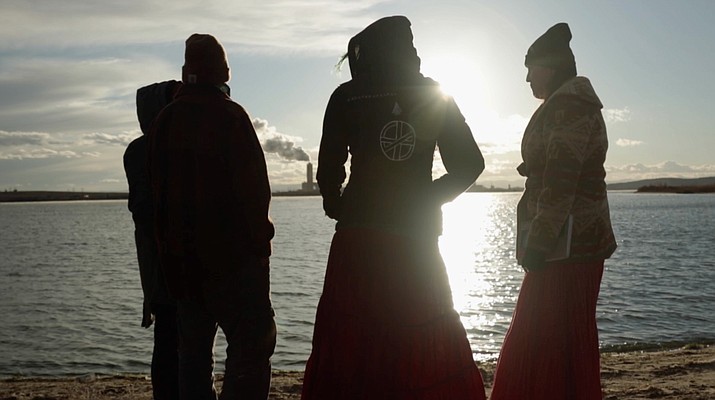 Filmmaker Ivey Camille Manybeads Tso is bringing "Powerlands” to the Sedona International Film Festival this year. The film highlights the displacement of Indigenous people and the devastation of the environment by energy companies that exploit the land to the detriment of the Native people on them — issues Tso and Indigenous people all over the world face.

Tso, along with producers Jordan Flaherty and Ewa Jasiewicz, focuses the film mainly on coal and oil, but uranium and wind power are also mentioned — not all green power is helpful if companies producing it are not regulated or do not care about the communities they impact.

“Any energy source can be turned into a non-green resource and can be deadly and dangerous for Indigenous communities, if not done correctly or done in tandem [with them],” Tso said.

Tso said whether it’s Black Mesa, where she grew up dealing with Peabody Coal, or Columbia, where they’re dealing with another coal mining company, the issues remain the same and so is the attitude of the coal companies.

“We have a really amazing clip, that we had to fight to get, but it’s the actual companies sitting in a meeting with the community and they straight up say, ‘Why aren’t you thanking us for everything that you’re given, that we’re giving?’”

Tso acknowledges sometimes the companies do give housing and location, but even those take away food sovereignty, culture and identity.

“A lot of these people’s house sites, people have been there for thousands of years,” Tso said. “It’s got so much history (and) so to be moved from that erases, especially in indigeneity, a lot of who we are.” 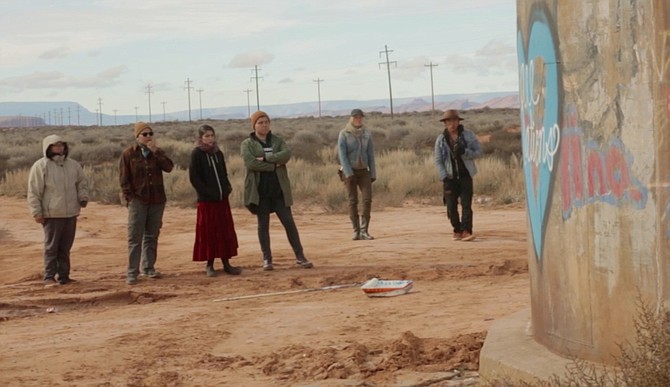 Diné youth paint a water tower to spread the message that water is life and spark a conversation about non-potable water sources on Hopi Partioned Land. (Photo courtesy of Powerlands)

Tso said “Powerlands” shows that even with wind power, the effects can by devastating, especially when no care is shown for the communities where the infrastructure is constructed and because there is no care for the technology itself.

“When working in Oaxaca, it shows what happens when a company just comes in and puts up windmills…they weren’t cleaning them. So oil was dripping into the water,” Tso said. “It was polluting the water sources. And they were too tall. So, during bird migrations, it would just rain blood.”

Tso said some of these issues were caused because there is no regulation in Mexico, like the U.S. Food and Drug Administration.

She said installing the windmills involved corrupt practices and people were often forced off their land at gunpoint. Other land owners were paid to allow windmills on their property with caveats that if they disappeared, the company got the land.

“It doesn’t go to your family,” Tso said. “A lot of people disappeared.”

She also explained how Indigenous communities can make a difference when they are put in charge of maintaining energy resources.

Tso said on the Navajo Nation, Peabody Coal could have tried that concept, although coal is still not a great resource.

“But, still, working with the community could have changed so much,” she said. “We would have more water out there. The desertification that we’re seeing would be less disastrous. The wild drought that we’re having would not cause this many wildfires if we still had the aquifer that Peabody Coal had access to.”

Tso said she knows that many people on the Colorado Plateau who may see the film are well steeped in these issues, having lived them and fought against them their entire life. But she believes the film is worth seeing, especially for Indigenous communities and the message is simple yet powerful.

Tso said there are many forms of resistance, whether its culture reclamatio, being in charge of the energy themselves, militant forms of more peaceful ones.

Whether it is Black Mesa, Columbia, the Philippines, anywhere where energy extraction is taking place, the story is the same, and sometimes Tso said, the company is even the same. She believes the resistance is also the same.

“In Black Mesa, the land resistance is going on,” Tso said. “A lot of people think we won, but really Peabody Coal just went into bankruptcy. They are still mining, even though they can’t mine, they can still take anything that was pre-mined, and they are still doing that. That hasn’t stopped.”

In Columbia, the company moved homes, which resulted in the loss of food sovereignty and identity. And in the Philippines, the government came in and massacred a family, the Capion family in the middle of the night, while the men were gone — as detailed in “Powerlands.” 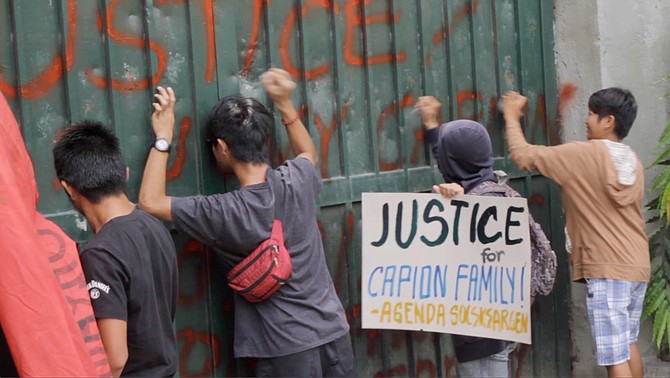 A protest asking for justice for the killing of the Capion family in the Philippines. (Photo courtesy of Powerlands)

And while Standing Rock, where people were protesting a pipeline in its only resource for clean water, got a lot of attention, Tso said issues like that are happening everywhere in Indigenous communities all around the world, but receiving scant attention, except from the activists actively resisting.

There was too much footage to show everything, Tso said, and out of the five places in the film, most people will only recognize Standing Rock, even though all the places shown, and many more, have been fighting the same struggle for 40 to 60 years.

“It’s so easy to flick a switch and not think, ‘Where does that power source come from?’” Tso said. “And pretty often, especially here in the Southwest, that power source comes from devastating a community. And then, also not powering that community either. On Black Mesa there is not running water or electricity.”

Neither did the communities filmed in Columbia or the Philippines.

It’s easy to lose hope, Tso said, pointing out that her generation has never lived in a time with a healed ozone layer.

“I was born into a world where [the ozone] was already partially gone,” she said.

But hearing reports that it’s possible that the ozone can heal itself gives her hope.

“For me, I’m trying to hold onto that little bit of hope. Because it sucks right now,” she said. “There’s a pandemic. There’s a war. Is the sun going to fall down? I try to hold onto the little bits of good things, like I can look forward to 2052, which is not something that ever thought I would say in my life.”

But the realities of life in this time are there too. And “Powerlands” brings that message home and that the issues in the film are going on every day in Indigenous communities.

“It’s not just energy consumption,” Tso said. “It’s any resource extraction, like the cinder hills around Flagstaff. They are fascinating, incredible and take thousands of years to be formed. And we’re getting rid of one that I saw as a full hill in fourth grade going to school.”

Tso said it’s not about not having anything or using any resource. But it is about balance.

“If you want those things, there is a way to extract and to use resources without depleting them,” she said.

More information about films and show times can be found at www.sedonafilmfestival.com.