SHOW LOW, Ariz. — The talent of artists from throughout Navajo and Apache counties was evident in this fall’s Locally Grown juried art exhibition at the Talon Gallery at Northland Pioneer College (NPC). Residents James Beck Gucwa of Pinetop, Karen Lewis of Show Low, and Emma Rockey of Snowflake captured first, second, and third-place cash awards for their winning entries during a closing reception held Friday, December 2, 2022.

This fall’s Locally Grown exhibition ran from October 31, through December 2, and was juried by Pavel Amromin, a figurative artist who investigates aspects of the human condition in his clay sculptures. Originally from the Soviet Republic of Belarus, Amromin currently lives in Panama City, Florida where he is an Assistant Professor of Art and the Gallery Director at Gulf Coast State College. “It was a pleasure to jury this year’s Locally Grown exhibit.” Amromin explains, “I really enjoyed the diversity of media, subject, and vision.”

Gucwa is a well-known local artist and musician and although he has been composing artwork for some time, his first-place acrylic painting titled “Twigs and Thorns” is a diversion from his standard style. “This was a different approach for me,” he admits. “I started with only an image I had seen in a dream of a floating bundle of thorny twigs. As I recalled the dream, I began to paint it.” It started as simply a bundle on a bare white canvas. “I had no idea how I would handle it,” he concedes. Gucwa added clouds and a vast sea, and “one thing just led to another. The planet Mars began to appear and a ship in the water seemed appropriate,” he says. This was a totally different approach for Gucwa, whose prior paintings were always pre-planned and he always “knew what the steps were going to be.” Gucwa discloses that “this painting, could be considered, to some extent, experimental (and fun).” He says “Others in this vein are sure to come.” This and more of Gucwa’s original artwork can be viewed online at his website www.kingneonfineart.com. 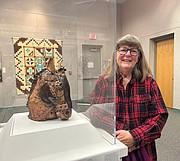 Emma Rockey, who recently moved to the Snowflake area from Kansas City, brings places she’s visited and trips and experiences she imagines (and hopes to do one day) to life on the canvas. She says that her second-place acrylic painting, "A Trout for Russell,” was a gift for her dear friend Russell whom she painted it for. She explains the fish “is captured as my imagination would have it… as if I were on an idyllic fishing trip, pulling this fish out on the fly.” Rockey is an avid hiker and she and Russel (who came with her from Kansas City) enjoy exploring and experiencing the outdoors together. She explains, “I wanted to emulate the color schemes of mosses floating in the crystal-clear pools that I’ve waded through in Wyoming while accompanying Russel during his fly-fishing escapades.” Having formerly lived in a large city without abundant fly-fishing activities, Russell never did catch his fish. However, he still hopes to catch it one day. Rockey states, “I hope this painting helps him keep that dream alive.”

Emma Rockey poses with her painting "A Trout for Russell," with Russell, whom she painted the piece for. (Photos/Northland Pioneer College)

For third-place winner Karen Lewis, her 3-D sculpture titled “Fashion Armor,“ perfectly shows off what she calls the “Karenization” of her distinctive pieces. Lewis explains that the piece evolved one morning while she sculpted a horse head out of speckled buff clay during an art class. “I wasn’t able to leave it alone,” she confesses. “I began the ‘Karenization’ process.” This included adding markings and raised areas giving the work “a life of its own.” She says, “The glazes highlight the armor plates, and the stains deepen the indentions. This creates a unique look. Whatever he says with his face is up to the viewers’ interpretation.”

Commenting on the exhibit’s entries, the show’s judge Amromin notes, “Putting yourself out there to be judged by others is never easy and takes a certain amount of courage. I would like to congratulate all of the participating artists. If your work did not get in this time, I would like to encourage you to keep working and keep putting your work out there.” He adds, “You have a voice, and you have a vision. Sharing that vision with others can be intimidating, but it can also be very rewarding for you and those around you.”

Locally Grown is an exhibition of art in any media. Drawings, paintings, pottery, sculptures, quilts, jewelry, or any other original or unique artwork including functional items may be submitted. For additional information about the Locally Grown exhibit or the Talon Gallery and upcoming shows, contact Gallery Director Magda Gluszek, at 532-6176, (800) 266-7845, ext. 6176, or email magda.gluszek@npc.edu.