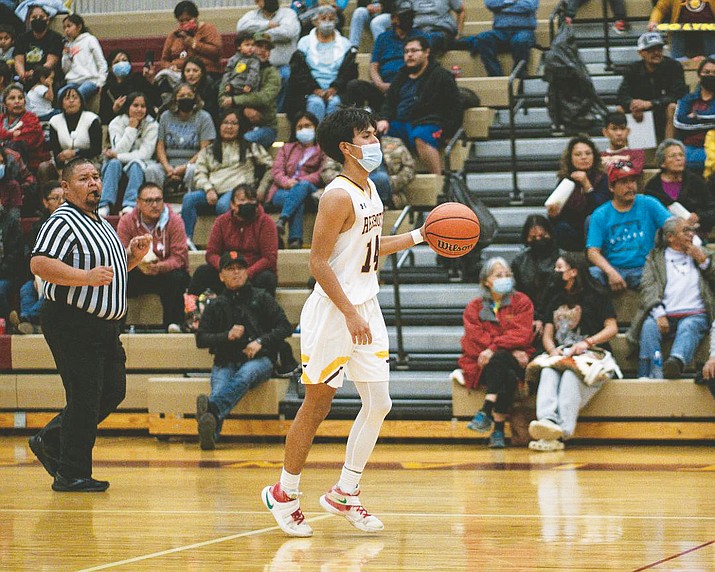 The Hornets (0-4, 0-0) were coming off a 45-44 nail-biter to Piñon less than a week before the start of the tournament. Rehoboth was playing its first game of the 2022 basketball season.

The Lynx (2-1, 0-0) have fought off injuries in the short and still coronavirus-plagued season, their head coach Kevin Zwiers said. Nevertheless, the team has persevered.

“Nobody knew what we were going to look like as a team as far as with respect to team chemistry and so forth,” Zwiers said after the game. “We’ve had some unfortunate injuries, but we have persevered throughout it all. We’re on the mend, but not completely there, yet.”

The Lynx jumped out to a 11-3 first quarter lead within the first seven minutes of the game. The scoring load and play-making came primarily from freshman off-guard Trajen West. Trajen's older brother, (senior) Raedon, was a terror on the offensive and defensive ends for the Lynx, too, providing a scoring punch when the Hornets tightened up on defense at the end of the first quarter.

Unfortunately for Ganado, the second quarter saw the Lynx grow comfortable leads and witnessed Zwiers implement a myriad of defensive schemes. The Hornets simply could not establish a substantive offensive set to thwart the momentum of the Lynx.

Junior guard Grant Paddock didn’t score a lot of points for Ganado, but played the complete floor game with respect to defense and getting at loose balls. Junior big man Ethan Billy clogged the middle for Ganado rebounds, but Rehoboth’s quicker guards were a little too much to contain, as they garnered their share rebounds.

“We played a very good team and just couldn’t get into a fluid offense,” Ganado head coach Chad Mescal said. “The guys played well, but their (Rehoboth) guards were able to penetrate and made a lot of their shots.”

The West brothers were too much to contain heading into the third quarter. Trajen played with a chip on his shoulder, penetrating, passing and shooting with untold confidence. Both brothers are part of a long family of male and female sports figures that have played for the Lynx.

By the time the fourth quarter started, it seemed as though Ganado just couldn’t figure out how to stop the machine-like offense of the Lynx. It helped that Rehoboth was playing in its home gym and in its first game of the season.

Trajen West finished with a game-high 24 points for Rehoboth. Zwiers said he felt good looking ahead. “Again, we’ve had some injuries. But, we’re looking better and better.”