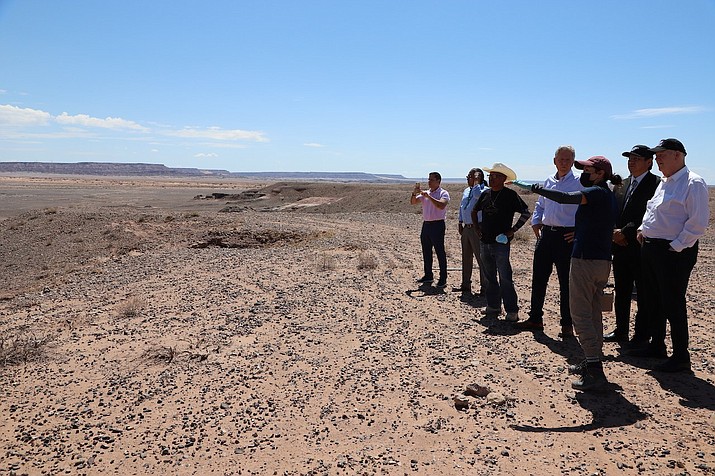 CAMERON, Ariz. — Arizona Rep. O’Halleran, tribal and federal officials met Aug. 18 at Cameron Chapter House for a two-hour roundtable to discuss what to do about the more than 500 abandoned uranium mines on the Navajo Nation.

O’Halleran said the uranium mines on the Navajo Nation are dangerous and need to be cleaned up, even though remediation is extremely costly and more information is needed.

O’Halleran emphasized the Navajo Nation wants to be included in the process and wants the Environmental Protection Agency to be heavily involved.

“When a mine is capped, it’s not permanent. In Arizona it rains a lot and there is a lot of wind,” O’Halleran said adding the weather that could impact the cap. “This has to be addressed.”

However, he noted the Nation does not want a uranium repository.

“We need a process either on or off site where it cannot escape,” he said.

O’Halleran said there is a lack of fencing at the mines and anyone could wander by them without knowing the health risks.

Navajo Nation President Jonathan Nez, Council Delegate Thomas Walker, Jr. and Cameron Chapter officials welcomed U.S. House Committee on Energy and Commerce Chairman Frank Pallone, Jr. (D-NJ) and O’Halleran to Cameron to visit one of hundreds of abandoned uranium mine sites on the Navajo Nation. The community of Cameron is located 48 miles north of Flagstaff, in the western portion of the Navajo Nation.

Nez said in a news release that progress is being made in the clean-up efforts and with the establishment of the first cancer treatment center on the Navajo Nation in recent years, but more needs to happen to fully fund the cleanup of the remaining 305 uranium mine sites and to provide more support for health care services.

“We have so many Navajo people who are challenged with health issues directly caused by uranium mining activities conducted by the federal government. We appreciate Congressman O’Halleran for his continued support and for bringing Chairman Pallone to the Navajo Nation to speak with the people on the ground who deal with these issues on a daily basis,” he said.

O”Halleran said there will be follow-up meetings in the coming weeks. He said collaboration and cooperation will be needed to address the uranium mining problem.

Approximately 30 million tons of uranium ore were extracted from Navajo lands during mining operations from 1944 to 1986 to support America’s nuclear activities, such as the U.S. military’s Manhattan Project, World War II and the Cold War.

There are approximately 524 abandoned uranium mine sites on the Navajo Nation with 111 of them in the western region alone. The Navajo Nation EPA estimates that there could be far more. However, only 219 of these sites have available funds for clean-up and remediation efforts, leaving a total of 305 unaddressed sites that pose severe environmental and health hazards to surrounding areas and people.

During the visit, the Navajo Nation EPA also led a site visit to two abandoned mines near the Cameron Chapter House, where generations of Navajo families continue to reside in nearby homes.

Shirley recommended that a comprehensive health study should be completed to show how extensive the health impacts are, to address regulatory reforms and commit more funding for clean-ups.

“I was glad to bring Chairman Pallone with me to sit down with President Nez, Navajo EPA officials, and Cameron leadership to discuss abandoned uranium mines and what the federal government must do. These mines directly affect the health and safety of Navajo families and they are the federal government’s responsibility to clean up,” O’Halleran said. “As the chairman of the House Energy and Commerce committee, Chairman Pallone’s firsthand experience on this will be hugely effective in elevating this issue in Washington. I look forward to continued work with President Nez and Navajo leadership on this issue; we need to get this done.”

Nez also worked with congressional members and the White House to extend the Radiation Exposure Compensation Act for an additional two years, which also provides more time to work on a long-term solution that would extend the Act until 2040, expand down winder eligibility based on geographic residency and expand the range of years that can be used for calculating exposure for certain individuals working in uranium mines, mills or transporting uranium ore.

O’Halleran addressed flooding problems in Flagstaff, Navajo and Hopi. Along with other federal officials, he recently toured the Flagstaff area flooding sites and the rain was so hard they had to pull off the road for a bit. He said the county and the city have obtained $150 million to address the scar from recent fires like the Pipeline Fire that are causing the flooding to change the drainage. He said without funding, flooding will happen every major rainy season.

O’Halleran said his office is looking into how they can help those whose homes have been damaged by the flooding, but said his office has not seen requests for help with flooding on Navajo or Hopi, but they may need help with dams to keep areas from flooding. O’Hallersan said there federal funds, whether it’s from the recent Inflation Reduction legislation or other legislation, to help tribes with flooding problems and they just need to pinpoint where the funds will come from.