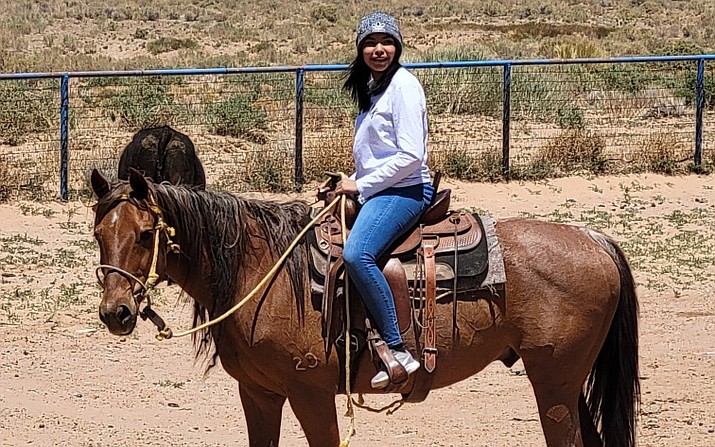 Holbrook Indian School student and athlete Kiarra Alma Gordon, who passed during an accident of the school bus being rear-ended by a semi-truck on Interstate 40 in eastern Arizona Aug. 28 while on a school field trip. (Photo/OPVP)

“To her mother, Fanassa Ashley, and her grandparents we pray that you take comfort in knowing that your precious daughter and granddaughter is now in God’s kingdom. Our hearts ache for you, your family, and the Holbrook Indian School. We hope and pray that you take some comfort knowing that the Navajo Nation mourns with you and your family,” Nez said.

Kiarra Alma Gordon was born July 26, 2005, and was from Wide Ruins, Arizona. She was Kinyaa'áanii (Towering House Clan), born for Kinyaa'áanii, and her maternal and paternal grandfathers were Tódich'ii'nii (Bitter Water Clan). Gordon was in the eleventh grade at Holbrook Indian School. She enjoyed volleyball, art, music, cooking, ranching, and driving.

Lizer offered his thoughts as well.

"We can’t imagine the pain you may all feel, but we hope that you feel comforted in knowing that you couldn’t have been more caring and supporting of your precious child. Her life was a blessing to all who had the privilege to know her. We offer our deepest sympathy and open our arms and hearts during this painful period,” Lizer said.

“Our daughter and granddaughter, Kiarra’s beautiful soul lives on in our hearts and minds and everyone whose life she impacted. She always offered to help others by putting others before herself. She was a wonderful role model for her younger brothers and sisters. She is dearly missed,” said her mother, Fanassa Ashley, aunt, Falonna Ashley, and grandmother, Dina Clark.

The funeral service arrangements are pending. Donations can be sent to the family via Zelle to Falonna Ashley at (480) 329-8551. The Navajo Nation Department of Health will be offering counseling services for Holbrook Indian School students, staff, and teachers this week.

HOLBROOK, Ariz.. - A student at Holbrook Indian School has died and four others were injured after a school bus with 19 people was rear-ended by a semi-truck the morning of Sunday, Aug. 28, according to the Arizona Department of Public Safety.

The accident occurred in the eastbound lanes of Interstate 40 at milepost 328 near Sanders, approximately 55 miles east of Holbrook.

Officers said the bus had slowed as it approached another crash that had occurred earlier that morning, when it was rear-ended by a semi-truck. It subsequently was pushed into the commercial vehicle, causing a pile-up.

Of the 19 passengers, officers confirmed one minor died, and four others inside the bus sustained serious injuries. Holbrook Indian School reported six injuries. It is unknown the age of those that were injured. No other serious injuries were reported.

The school said the bus was transporting staff and students on a field trip to Window Rock.

"Our concerns now are for our parents and families as we uphold and grieve with them," said Holbrook Vice-Principal Ulysses Campos. "We ask that you would be patient and respectful as we work through this as a school community, and we solicit your prayers on behalf of everyone impacted by this tragedy."