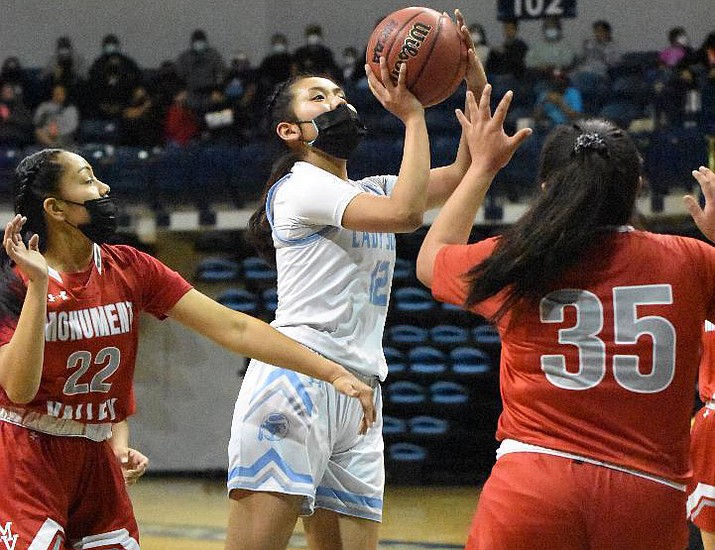 Window Rock's Robey Talkalai led the Lady Scouts in scoring and assists the past season. She will attend Copper Mountain College in California on a basketball scholarship as will two of her teammates, Caitlin Belone and Melicia Nez. (Photo/Stafford Woody)

WINDOW ROCK, Ariz. — It took a little while — particularly for someone who is a flat-out excellent basketball player and all-everything performer, but Window Rock High School’s Robey Talkalai recently signed a letter-of-intent to play college basketball at Copper Mountain College in Joshua Tree, California.

The decision was well thought out, and Talkalai joins a former Lady Scouts Starting 5 who’ve signed to play at the next level. Talkalai averaged 18.2 points per game for the Lady Scouts and teamed with shooting guard Makaela Roanhorse to terrorize opponents en route to a 12-14, 5-6 season and 51-47 heartbreaking state playoff loss to Bourgade Catholic — in which Talkalai nearly single-handedly brought the Lady Scouts to a win.

Talkalai was voted 3A North Offensive Player of the Year and played point guard for the Lady Scouts. A versatile athlete, she played basketball, volleyball and softball at Window Rock.

“I’m very happy and I plan to play just basketball and work very hard in the classroom,” Talkalai said. She said she plans to major in general studies.

Talkalai’s mother, Regina Smith, also played basketball back-in-the-day at Window Rock High and was a notable player in her own right. Smith was part of a 3A state championship team when she played.

“I’ll be leaving soon and will miss my teammates and friends and coaches and teachers,” Talkalai added. “I’m excited.”

Talkalai joins graduating teammates Caitlin Belone and Melicia Nez who each signed on at Copper Mountain, too. Talkalai said she was considering colleges in Vermont and Kansas as well, but picked Copper Mountain because it’s smaller and closer to home. Talkalai noted that having Belone and Nez on the Fighting Lady Cacti team is a positive thing and is something extra-special.

“I get to play with two people who I know on and off the court, who are my friends,” Talkalai said. “I’m looking forward to a great year.”

First-year Lady Scouts head basketball coach Gabrielle Whitney said the signing of Talkalai proves something is being done the right way with respect to girls basketball at Window Rock High School. After all, it’s not everyday that a team’s Starting 5 gets into college to play for their chosen sport — and three student athletes at the same college.

“I don’t know if that’s ever happened before at Window Rock High School,” Whitney said of the three students signing to play. “It is truly something I consider to be very, very special.”

Copper Mountain College is a public community college. It was accredited in 2001 as the 108th such institution in California. CMC offers a total of 24 different certificates and degrees.

During the COVID-19 lockdown, Talkalai’s parents would drive her to Phoenix where she played in tournaments. She said those tournaments honed her aggressive style of play and aided in her success at Window Rock.