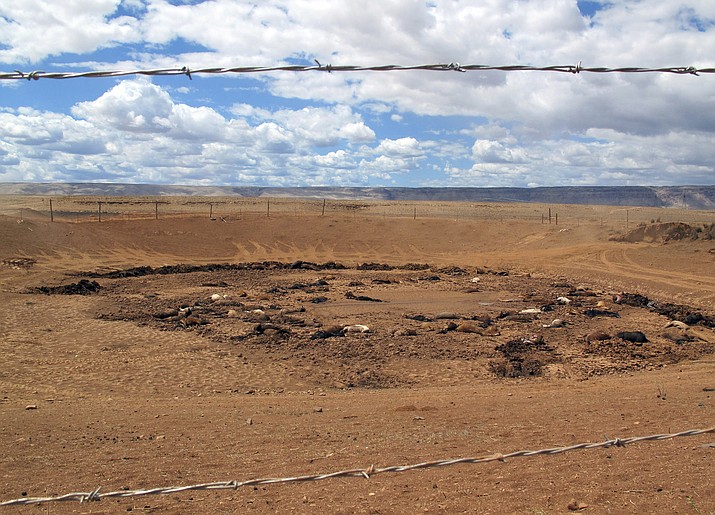 Dozens of horse carcasses lying in a dry watering hole are surrounded by a barbed wire fence near Cameron, Arizona., on May 3, 2018. FEMA has developed a new strategy to better engage with hundreds of Native American tribes as they face climate change-related disasters, the agency announced Aug. 18. (AP Photo/Felicia Fonseca)

The agency announced plans Thursday to include the 574 federally recognized tribal nations in discussions about possible future dangers from climate change. FEMA has earmarked $50 million in grants for tribes pursuing ways to ease burdens related to extreme weather. FEMA Administrator Deanne Criswell says tribal communities across the country are facing increased threats as a direct result of climate change, from changing sea levels to more floods and wildfires.

The Federal Emergency Management Agency has developed a new strategy to better engage with hundreds of Native American tribes as they face climate change-related disasters, the agency announced Thursday.

FEMA will include the 574 federally recognized tribal nations in discussions about possible future dangers from climate change. It has earmarked $50 million in grants for tribes pursuing ways to ease burdens related to extreme weather. Tribal governments will be offered more training on how to navigate applying for FEMA funds. The new plan calls for tribal liaisons to give a yearly report to FEMA leaders on how prepared tribes are.

"We are seeing communities across the country that are facing increased threats as a result of climate change," FEMA Administrator Deanne Criswell said in a conference call with media. "What we want to do in this strategy is make sure that we can reach out to tribal nations and help them understand what the potential future threats are going to be."

In recent years, tribal and Indigenous communities have faced upheaval dealing with changing sea levels as well as an increase in floods and wildfires. Tribal citizens have lost homes or live in homes that need to be relocated because of coastal erosion. Some cannot preserve cultural traditions like hunting and fishing because of climate-related drought.

Lynda Zambrano, executive director of the Snohomish, Washington-based National Tribal Emergency Management Council, said tribes historically had to make do with nobody to guide them. For example, over 200 Native villages in Alaska have had to share one FEMA tribal liaison. Or different tribes were told different things. So, nonprofits like the council tried to fill in gaps with their own training, she said.

"The way that I equate it to people is that they built the highway, but they never created the on ramps," Zambrano said. "If FEMA is just now getting around to building the ramps, well, that'd be a good thing. But there needs to be very clear policy and procedure and direction—and it has to be consistent."

Tribes have historically been disproportionately impacted by natural disasters because they are in high-risk areas and have little infrastructure, she added. They will only continue to be vulnerable.

It was only in 2013 under the Sandy Recovery Improvement Act that federally recognized tribes obtained the ability to directly request emergency and disaster declarations. Before, they had to apply for disaster funding through the states.

The new strategy emphasizes making sure tribes know of every FEMA grant program and how to apply for it. The hope is this will give them an equitable chance at getting funding. The agency hopes to find ways to get around barriers like FEMA cost share, or the portion of disaster or project funding that the federal government will cover. In some cases, tribes simply can't afford to pay their share.

"In those areas where we can't, what we want to do is to be able to work with the tribes to help them find other funding sources to help them stitch together the different funding streams that might be out there," Criswell said.

However, FEMA's new strategy to engage Native tribes seems specifically aimed at those with federal recognition. That would seem to leave out tribes that only have state recognition or no recognition. In a place like Louisiana that nuance could leave out many Native Americans most affected by climate change.

When Hurricane Ida came ashore in 2021, it devastated a large swath of southeast Louisiana that has been home to Native Americans for centuries. With climate change, hurricanes are expected to get stronger and wetter. But the tribes most affected by Ida say not having federal recognition has stymied their ability to prepare for and recover from storms.

Cherie Matherne is the cultural heritage and resiliency coordinator for the Pointe-au-Chien Indian Tribe. Upon hearing about FEMA's announcement, she said she wished the changes would also be applied to tribes without federal recognition like hers.

"It's an oversight if they don't work with state recognized tribes," said Matherne, who is living in a trailer next to her gutted home in southeastern Louisiana. "If there are grants for tribal nations and tribal people that would be very helpful information for people to know."

FEMA will continue to work with state and local governments to ensure state -recognized tribes are getting assistance, agency officials said.

Another change under the new strategy is more FEMA staff meeting tribes on their land, a request the agency got from multiple tribes. This will include anything from in-person technical assistance in small, rural communities to appearing at large national or regional tribal events.

Bill Auberle, co-founder of the Institute for Tribal Environmental Professionals at Northern Arizona University, said this focus on regular interactions on tribal land is an immense development. More intimate discussions such as workshops, roundtables and webinars are "exceedingly important to tribes."

"It's one thing to send out a notice and say 'We would like your response,'" Auberle said. "Some of those tribes are small but have very serious needs. FEMA can certainly appreciate that."

In addition to making more funds available to tribes, FEMA could also help by providing things like technical support as tribes prepare for and adapt to climate change, Auberle said.

The push to ensure all tribes fully understand how to access FEMA assistance or other related grants will be done with webinars, tribal consultations or regular meetings with FEMA regional staff.

Agency workers will get trained as well, learning a historic and legal overview about tribal sovereignty and cultural sensitivities.

Zambrano, of the National Tribal Emergency Management Council, hope this leads to every tribal nation getting funding for an emergency management program.

"Our tribal nations are a good 30 years behind the curveball in developing their emergency management programs," she said. "Nobody is better at being able to identify, mitigate, prepare and respond to a disaster in Indian Country than the people that live there."