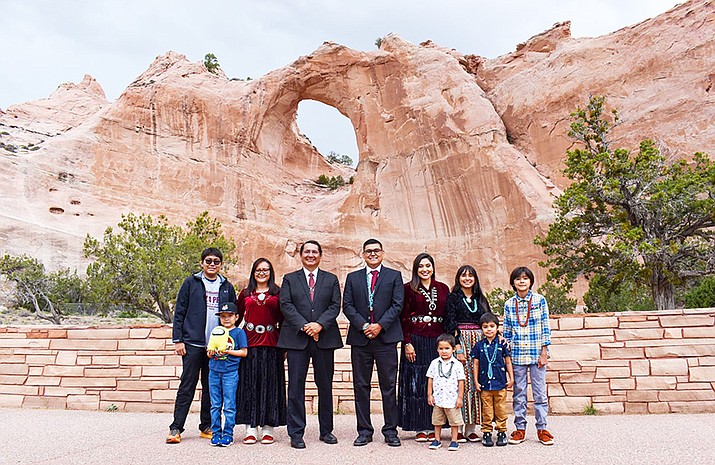 Per Navajo Nation code, candidates have just five days after the primary election to announce their vice-presidential candidates, making Monday the last day.

After much anticipation, Nez introduced Air Force veteran Chad Abeyta, 33, who is an attorney, husband, and father from Alamo, New Mexico, one of the satellite Navajo communities on the eastern side of the nation. He currently lives with his wife’s, Paulene Abeyta, community in To’hajiilee, west of Albuquerque, where they are raising their two children.

His wife, Paulene Abeyta, is currently vice president of the To’hajiilee Community School Board of Education, which in satellite Navajo communities wields a lot of influence. She also holds a juris doctorate degree and graduated from the University of Arizona’s James E. Rogers College of Law.

“I am honored to be selected as a candidate for vice president of the Navajo Nation. My wife and I are evidence of President Nez’s commitment to bring our young Navajo people home to serve and become leaders. My family and I are here today to join President Nez, First Lady, and the team to continue that mission for the Navajo Nation and our people. President Jonathan Nez has demonstrated outstanding leadership, especially during this unprecedented time as he continually works and advocates for the best interest of the Navajo people. My family and I look forward to taking on the challenge of serving all Navajo people,” said Abeyta in a press release.

Nez outlined qualities like family values and a bootstrap mentality in explaining why he chose Abeyta to join his ticket.

“Chad and Paulene were raised by strong parents and grandparents and they now raise their own children with the same love and compassion that they were raised with. They worked hard to earn their law degrees and they immediately returned home to help our people the past few years. They are involved at the community level and they have professional experience with the Navajo Nation that will serve the Navajo people well. My wife, Phefelia, and I are excited and looking forward to building on the success of the first term in office alongside Chad and Paulene. With his upbringing, faith, military service, education, professional experience, and family, Chad will serve our people with great honor and love,” Nez said.

Nygren selected Torreon Chapter President, Richelle Montoya Chee. Torreon is part of the tri-chapter area in Eastern agency. She is Hashtł'ishnii born for Ta'neeszahnii. Her maternal grandfather is Kinłichii'nii and her paternal grandfather is Táchii'nii. She comes from a family of veterans.

Under a clear, blue sky, strikingly different than hours before, Montoya Chee took the mic to introduce herself to the Navajo people.

Montoya Chee made her speech mostly in Navajo, which is important for Navajo voters.

The Navajo Nation has yet to elect a woman as president or vice president. There continues to be cultural barriers that keep Navajo women from ascending to lead their nation.

Nez and Nygren will face each other in the tribe’s general election in November. They were the top two vote-getters among 15 presidential hopefuls in last week’s primary election.

The AP contributed to this report.