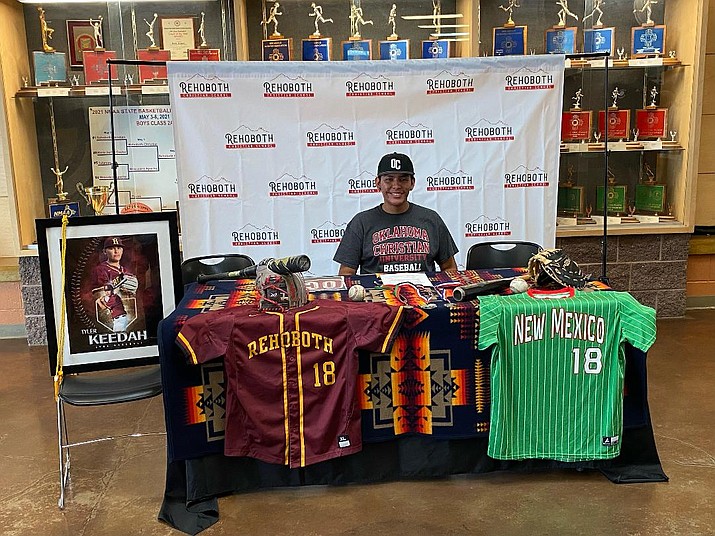 REHOBOTH, N.M. — Tyler Keedah dabbled in basketball and other sports growing up, but it was baseball that he liked best. And now it’s baseball that he’ll play as a scholarship student at a university in Oklahoma.

That fondness for baseball, coupled with one full year as a pitcher and third baseman at Rehoboth Christian School, after transferring from neighboring Miyamura High, has earned Keedah a scholarship to play at Oklahoma Christian University in Oklahoma City, Oklahoma. An injury figured into Keedah not playing baseball at Rehoboth for more than a year.

Keedah recently signed a letter-of-intent to play at the private NCAA Division II school. And the signing comes after the Lynx completed a 21-2, 4-0 New Mexico 2A District 1 season in which the team was the No. 2 seed heading into the state playoffs. The Lynx ultimately fell to Capitan (15-7, 5-1) in the second round, 6-2.

“He’s a good kid and a very good baseball player,” Rehoboth head baseball coach Anthony Sanchez said, adding that Keedah played multiple positions for the Lynx. Sanchez pointed out that Keedah has no weakness on the baseball field. “He’s a very good baseball player — a good team player and a very smart player. He can pitch. He can play first base, third base, shortstop, the outfield. This college offer is well-deserved.”

Keedah said he’ll play first base for the Eagles. He said he plans to major in mechanical engineering, which is one of the reasons why he chose the school. He said there were a couple of other regional schools he considered, but everything came down to faith and family.

“I chose Oklahoma Christian because they have a good engineering program and it’s not that far from New Mexico,” Keedah said. “I’ll miss my teammates and everybody at Rehoboth.”

Keedah — he maintained a 3.5 grade point average at Rehoboth — played on area travel teams and with the Gallup Amateur Baseball Softball Association. He played in the Pee Wee Reese World Series that went to Puerto Rico.

Oklahoma Christian University is a member of the National Collegiate Athletic Association (NCAA), primarily competing in the Lone Star Conference since the 2019–20 academic year.

Noteworthy at Rehoboth is that Sanchez has put together stellar Lynx teams since coming aboard six years ago. His teams are consistently double-digit seasonal finishers and have played in the state 2A post-season since 2018.