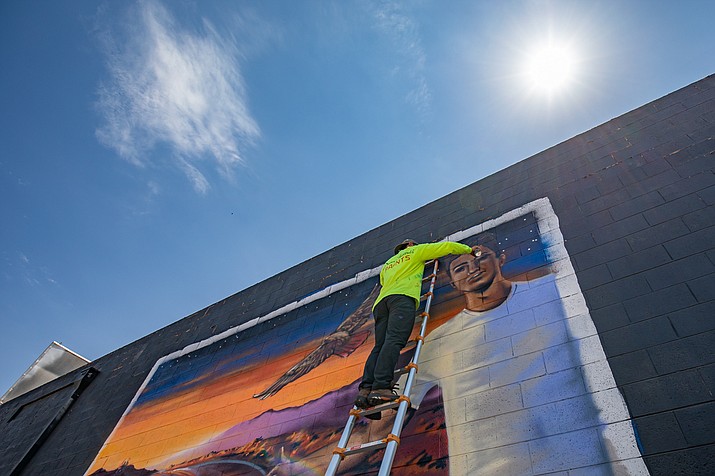 Artist and writer Isaac Caruso uses his public art to communicate with communities and help give them a visual identity. He is completing murals in Winslow as part of a book project to bring attention to ADHD. (Photos/Lori Bentley Law)

Muralist Isaac Caruso believes in the power of daydreams. All things are possible when you cross through that mystical portal into the world of figments. For most of us, those daydreams remain deep in our minds. Not so for Isaac. He sets the wonderlands of his imagination free in the form of public art and transforms walls around the state of Arizona, including Winslow.

Early on, though, he struggled to find the right way to express himself. The self-professed “Dream Alchemist” was a classic ADHD (attention deficit hyperactivity disorder) kid, who had a hard time with traditional teaching methods. He eventually turned to graffiti as a means to get lost in imagination.

Kids are notorious for writing on walls because they want to project their imagination. We see the same behavior in graffiti writers. In this sense, muralists and graffiti writers are just people who never lost that desire to visually transform their surroundings. 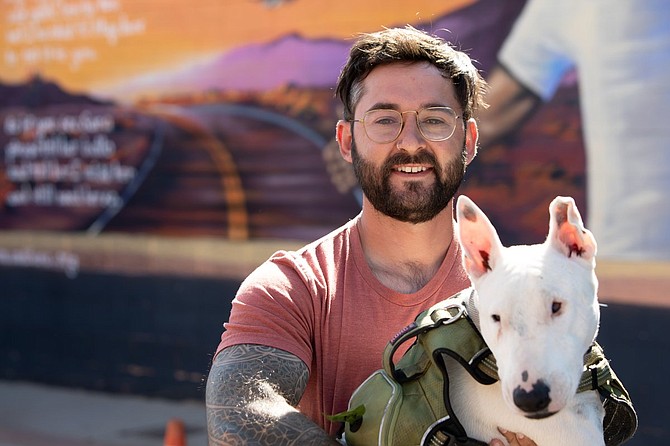 Artist and writer Isaac Caruso uses his public art to communicate with communities and help give them a visual identity. He is completing murals in Winslow as part of a book project to bring attention to ADHD. (Photos/Lori Bentley Law)

Transforming surroundings is one thing; breaking the law is quite another. In his twenties, the now 23-year-old got caught. At the time, he was working under a grant through the city of Tempe. The city’s art director gave him a choice: “You can either try and be Banksy or you can do public art but you can’t do both.”

Isaac (smartly) chose public art, murals, to be exact. He’s painted murals for APS, United Way, the University of Arizona, and more. He’s won contests and even been awarded an NEA grant. His current project, though, hits closest to his heart.

For more than 10 years, Isaac has been formulating the plan for a children’s book called "Sam & Sara" exploring the challenges of being ADHD and functioning in a linear society.

but really her thoughts

This isn’t any ordinary book, though. Isaac’s innovative concept is to create the story through a series of 50 murals painted across Arizona. He will then photograph the murals and compile them into a book following Sara as she slides into a richly textured imaginary world with her adventure partner, Sam.

This is the story

of a girl who would dream

worlds of her own

beneath the moon’s beam.

Like Isaac, the main character is a daydreamer. Sara doesn’t let her attention issues stop her from pursuing a life of adventure, nor does the man who created her. After getting frustrated with his university studies, Isaac took to the road. The travel bug bit hard. Since that time, he’s been from the icy fjords of Svalbard to the barrios of Uruguay, creating art along the way.

"I feel compelled to remind people that they are able to curate their own human experience," Isaac said.

And now Winslow will have his work as well, in the form of two pages from "Sam & Sara," including the epilogue, featuring Sam who must continue his adventure alone after Sara returns to her own world. The mural is visually appropriate for Winslow showing a dark desert road, an adventurer with his thumb out, and a hawk.

"I hope this mural conveys the romantic ideas of the open road and adventure," Isaac said. "I also hope it inspires them to pursue their personal quests for happiness and satisfaction in life."

Winslow will also have the final page in the book, a gloriously colorful mural full of “figments” (you know, those things in our imagination). This mural incorporates both of Issac’s "Sam & Sara" styles: the more cartoonish style of the imaginary world, and the more representational style of the real world.

It is the only mural showing both on the same page. (I particularly love the figment of Isaac’s van “Vanna White” with Gustavo hanging his head out the window)

Both murals add a beautiful splash of color and intrigue to Kinsley Avenue near Winslow’s famous corner, adding yet another interesting element for tourists and locals alike to enjoy.

To date, Isaac has completed 30 murals, starting in 2019 in Camp Verde. He hopes to complete the project within the year, and we plan to carry the book at the Motor Palace Mercantile, across the street from the murals on Kinsley Avenue.

We appreciate your kindness, humor, passion, and of course, your gorgeous work brightening up a small piece of Winslow’s Historic Entertainment District.

If it inspires people to affect their surroundings with positivity, in any creative way (starting a business, making an extra delicious sandwich, sharing an anecdotal story with a friend etc.) then it has achieved its goal.

Keeping up with Isaac

You can see the murals on Kinsley Ave at Third street, on the southeast wall of the Wild Styles building.