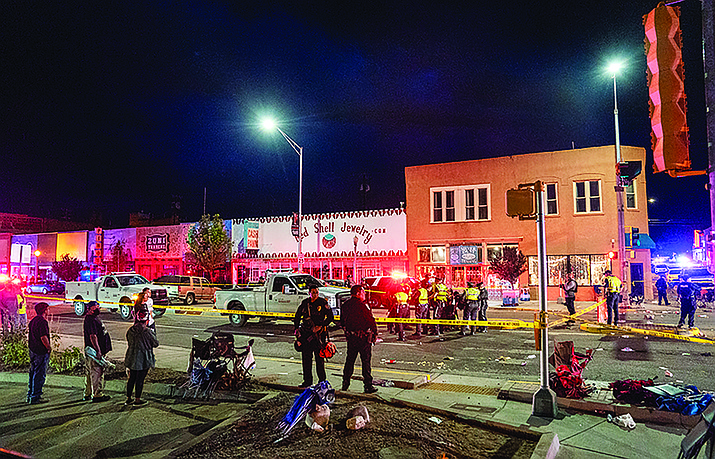 Police section off the site where an SUV came to an abrupt stop after a driver careened through the parade route of the Intertribal Ceremonial Centennial Celebration. in Gallup, New Mexico, Thursday, Aug. 4. 2022. Police arrested several people who were in a large SUV that drove through a Native American celebration in New Mexico, causing multiple injuries along a parade route crowded with families. (William C. Weaver IV/Gallup Independent via AP)

GALLUP, N.M. — Blankets, shoes, banners and umbrellas were left strewn along the street and on the sidewalks as people fled Thursday evening in downtown Gallup, New Mexico. Several people were in the large SUV that drove through the annual night parade during the centennial anniversary of the Gallup Intertribal Ceremonial, causing multiple injuries along a parade route crowded with mostly Navajo families. Two Gallup police officers were also injured.

The chaotic scene was captured across social media including the arrest of the alleged driver.

The Gallup Independent reported Friday morning that the alleged driver of the beige Tahoe that drove through the parade route has been identified as Jeff Irving, 33, of Gallup.

Irving “has been charged with one count of aggravated DWI (second offense), one count of leaving the scene of an accident involving great bodily harm, 14 other counts of leaving the scene of an accident but not involving great bodily harm, one count of aggravated fleeing a law enforcement officer, and one count of open container possession. He was also cited for driving while license suspended (DWI related), expired registration of a motor vehicle, and no proof of insurance,” according to the Independent.

The police officers who were injured were identified as Gilbert Gonzales and Elijah Bowman. The 13 other victims have yet to be identified.

The annual night parade is one of two parades that happen during the event. It features dancers from various Indigenous nations across the world and is attended by thousands from the mostly Navajo community. The event is a highlight for the community and is normally filled with joy and celebration.

Videos taken by parade goers show a large brown vehicle speeding down a main street, against the direction of the parade. Children performing traditional dances appear to have been among the first to see it rushing toward them. They can be seen running to the side as people scream and families scramble to get out of the way.

Navajo Nation council delegate Amber Kanazbah Crotty, clearly emotional, takes a moment to breathe as she goes live on Facebook to talk about the incident. She was present at the annual gathering.

“Shi Diné’e, just checking in. Just walked down… We’re okay,” Crotty said. “Everyone who was with us is okay that we know of. We’re with the group Rock You Mocs and MMDR (Missing and Murdered Diné Relatives) sister family at the Gallup Ceremonial parade.”

Crotty and the groups she was with had made traditional Navajo hair ties to give out at the event when she saw the vehicle barreling toward her.

“It was a beautiful night,” Crotty said, trying to hold back tears. “Right when we came out of that curve we just heard everyone, ‘Move! Get out of the way!’ Someone pushed us out of danger. Right when they did that the vehicle passed by us.”

Navajo Nation President Jonathan Nez was also among the crowd. In the background of his Facebook livestream lightning etched across the dark sky.

“We're all shook up. You see this on television and, you would think it will never happen here. I'm sorry to say, it happened here in Gallup, New Mexico,” Nez said on a Facebook livestream. “We were in the path of the vehicle. Thank God that folks that were around me, our team members, our council delegates, were not struck by the vehicle and it turned the corner. And from that point on, I don't know what happened.”

“NMSP (New Mexico State Police) is investigating an incident involving multiple pedestrians at the Gallup Intertribal Ceremonial Centennial Celebration. Multiple people, including two Gallup PD officers, were injured and are being treated on scene. The driver is in custody. More information when available,” the post stated.

The vehicle then swerved onto a side street and pulled into a parking spot before trying to pull out again, hitting a police car. Officers then converge on the vehicle, pulling at least two people out and handcuffing them on the pavement.

Delphelia Begay Charley from Yatahey told the Navajo Times that she was grateful her 2-year-old daughter and her parents are okay, as she sobbed after the violent incident had occurred.

State Police Lt. Mark Soriano said no one was killed and he couldn't elaborate on the extent of the injuries, the Albuquerque Journal reported.

The parade was a highlight of the Gallup Intertribal Ceremonial Centennial Celebration, founded in 1922 to honor Native American and Indigenous heritage.