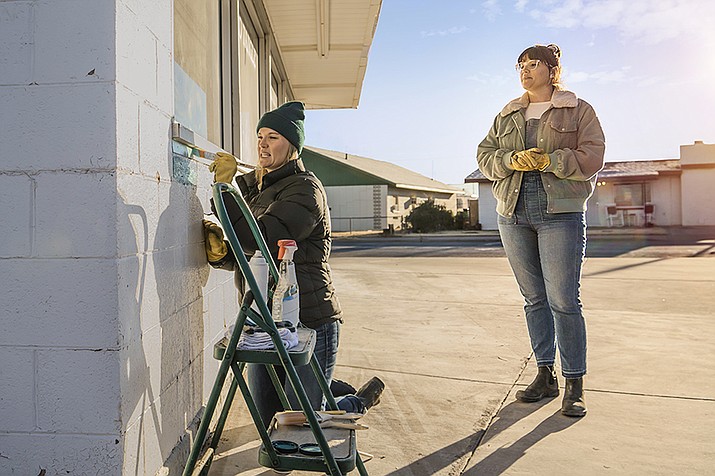 WINSLOW, Ariz. — Winslow will shine in the national spotlight May 1 at 8 p.m. (ET/PT) on HGTV and streaming on discovery+ for Hometown Kickstart as Leslie Davis and Lyndsay Lamb help kickstart Winslow, Arizona by turning a beloved root beer and chili stand into a welcoming space for locals and tourists alike.

Bob Hall, CEO of the Winslow Chamber of Commerce, said Winslow is planning on a watch party at the movie theater in town with a block party in front of the theater prior to the showing. Seating is first come, first serve, but the community is invited.

"I think a lot of people will show up," he said.

Hall said the Business Expo held at the chamber April 30 from noon until 4 p.m. is a free event and is a chance for people to walk through and see what local businesses have to offer. It is also a chance for local businesses to recruit new employees and educate people about their businesses. Northland Pioneer College will also be on hand to help people with filling out resumes or applications.

"There's an opportunity for people who have products they want the community to know about, to show off their product and talk about them or services that are offered in the community," Hall said

One of the businesses that will be at the expo is Graceland Portable Buildings, which is manufacturing its portable sheds and buildings where the old Coca-Cola factory used to be. The company also has stores in Tucson and in Colorado and other places in the country.

Hall said he was told the other factories have about 100 employees and expects the Winslow business will ultimately have the same number.

A truck stop will go in off Interstate 40 at North Park Drive and a four story boutique hotel that will be going in near the Maverick gas station.

A new developer has bought some property, Hall said, and is talking about building a golf course with desert landscaping, even though the greens would still be green.

Hall said the reason for the spurt of new businesses and development can be atrributed to a lot of prep work that has gone on.

"In the last 20 years, we've been progressing and planning and courting," he said. "It's been a long time coming. We have the right people doing the right things."

"She is the first Native American mayor for the city of Winslow and obviously she's a woman, so that's pretty unique. It speaks volumes about how progressive Winslow is," Hall said.

He also credits other leaders in town from the city to the chamber, the library, recreation department, hospital and prison with communicating more and creating opportunities for disseminating information to the public.

"I hear fewer and fewer people saying, 'Oh, I didn't hear anything about that.' I mean, we used to hear that," Hall said. "If I had a nickel every time I heard people saying that..."

Hall said he believes the exposure and growth right now are due to a combination of things, including the town using social media more and volunteers manning Facebook and city of Winslow pages to let people know about positive Winslow news.