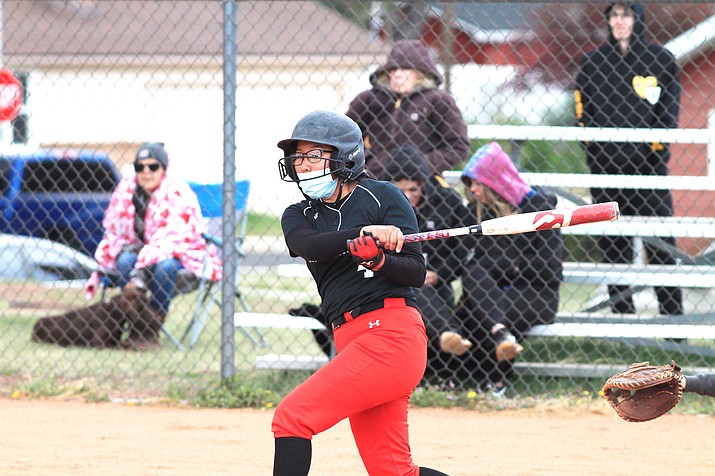 St. Michaels Lady Cardinals lead during the early innings of an April 22 game against the Williams Lady Vikings in Williams, Arizona. The Lady Cardinals were ultimately defeated during the doubleheader, 5-4 and 12-7. (Loretta McKenney/NHO)

WILLIAMS, Ariz. — The recently played doubleheader varsity softball games between the Williams Lady Vikings and Saint Michaels Lady Cardinals were unpredictable, but not really unusual, one of the head coaches said.

Williams (15-11, 9-1) won the first game 5-4 and took the second game, 12-7. The first game went extra innings and included a controversial call by the umpire when a Williams player ran into a third base umpire and determined to be hindered by the incident. A run was awarded to the Lady Vikings as a result.

The Lady Cardinals (12-7, 6-4) led in the game’s early inning by two runs. Then it started snowing and a 20-minute game delay was called. The wet and soggy field didn’t help for ideal playing conditions for either team, Tom said. 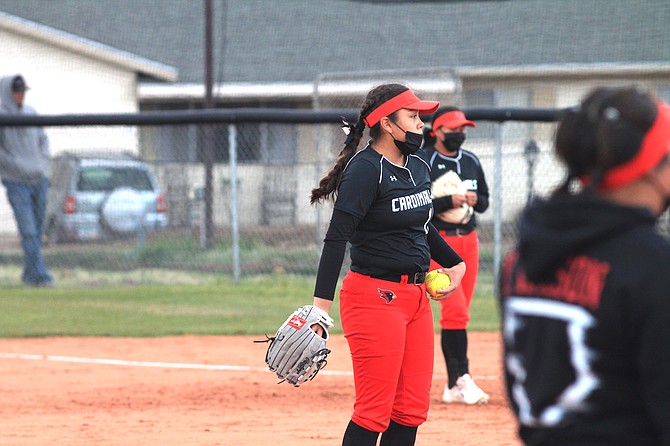 St. Michaels Lady Cardinals lead during the early innings of an April 22 game against the Williams Lady Vikings in Williams, Arizona. The Lady Cardinals were ultimately defeated during the doubleheader, 5-4 and 12-7. (Loretta McKenney/NHO)

“This was a bit unusual in that some unexpected things happened during the game — especially the first game,” Tom said. “It was a very competitive game.”

The game was tied up until the later innings, and won on an unforced error by Saint Michaels. The first game of the doubleheader was a regional game and the second game was a freedom game. The regional games count toward conference play and the freedom games don’t.

Williams, Joseph City and Saint Michaels remain the top teams in 1A North. The 2022 state playoff seedings come out toward the end of this week.

Senior Gabriella Simpson started at pitcher for the Lady Cardinals in Game 1 and recorded 10 strike outs and walks. The left-handed Simpson pitched the entire nine innings of that game.

Williams scored seven runs in the first inning of the second game of the doubleheader and beat Saint Michaels, 12-7. In the second game, sophomore Aaliyah Bob of Saint Michaels recorded doubles each of the three times she batted, and came home each time for the Lady Cardinals.

Ross started at pitcher in the second game for Saint Michaels and had 7 strike outs and three walks.