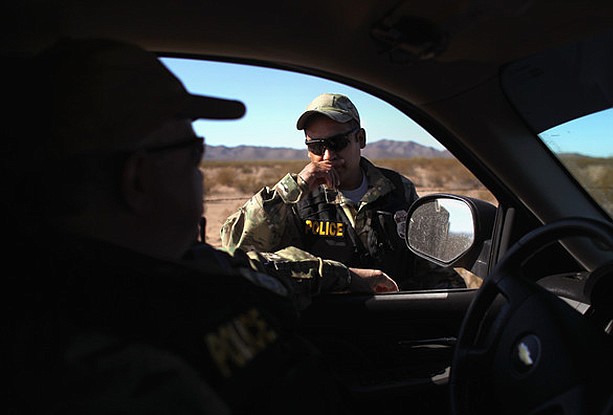 In addition to reclassifying the unit, the bill also allows Homeland Security to determine the best way to expand the program to other tribal jurisdictions.

The Shadow Wolves, an elite all-Native American unit within U.S. Immigration and Customs Enforcement (ICE), operate on the Tohono O’odham Nation which shares 62-miles of international border with Mexico.

“The signing of the Shadow Wolves Enhancement Act into law is a great step forward in protecting the Nation and the U.S. Homeland,” said Tohono O’odham Nation Chairman Ned Norris, Jr. “Fixing the disparity in classification will ensure the future of this unique unit and its role in protecting our people from cartels and other criminal activity. This was the result of years of effort and the nation is grateful to the many members of Congress who fought hard to get this legislation to President Biden’s desk.”

What are the Shadow Wolves?

• The Shadow Wolves are the Department of Homeland Security’s only Native American tracking unit specifically utilized for targeted interdiction operations.

• The Tohono O’odham Nation, patrolled by the Shadow Wolves, covers 2.8 million acres, including a 76-mile stretch of land shared with Mexico.

• The Shadow Wolves are a key component of the Native American Targeted Investigations of Violent Enterprises (NATIVE) Task Force, a High Intensity Drug Trafficking Area (HIDTA) initiative formed in August 2013, to disrupt and dismantle drug trafficking organizations operating within or through the Tohono O’odham Nation. NATIVE’s partners include HSI, the Tohono O’odham Police Department, the Bureau of Indian Affairs-Drug Enforcement Division, the Drug Enforcement Administration, and the Bureau of Land Management.

Since 1974, the Shadow Wolves have utilized traditional tracking methods to assist in disrupting and dismantling drug and human trafficking organizations across the 2.8 million acres of the Tohono O’odham Nation in southern Arizona and the 76-mile stretch of land bordering Mexico.

The unit is world-renowned for its skill for “cutting sign,” or reading physical evidence in the landscape: spotting a weft in the desert thicket, the edges of a mark in the sand, or the inside color of a broken twig.

As part of Immigration and Customs Enforcement task forces in the U.S. Department of Homeland Security, Shadow Wolves are a key component in interdiction and investigative efforts that lead to arrests and seizure of illegal drugs and guns.

The unit took part in an investigation that led to the capture and conviction of 18 members of the Sinaloa Cartel near the Tohono O’odham Nation in 2019.

As of last year, the unit was composed of nine members from tribes including the Tohono O’odham, Blackfeet, Sioux and Navajo.

According to the Tohono O’odham tribe, the Shadow Wolves have increasingly taken on investigative responsibilities, but were classified as tactical officers rather than special agents. The tribe said this has created challenges in officer advancement and recruitment that has hampered the effectiveness and viability of the Shadow Wolves program.

“With the signing of the Shadow Wolves Enhancement Act, that will change,” the nation stated in a recent release.

U.S. Sen. Kyrsten Sinema, D-Ariz., who sits on the Senate Committee on Homeland Security, was a primary sponsor of the bill and said the signing of the bill would help keep families safe as well as provide additional authority for the officers.

The Tohono O’odham Nation spends about $3 million in tribal revenue on border security operations, according to 2019 testimony given to Congress by the tribe’s former chairman. The tribe also investigates and funds autopsies for the deaths of dozens of migrants who perish trying to cross the reservation undetected.

The seed for the Shadow Wolves was sown in 1974 when the Tohono O’odham Nation allowed the now-dissolved U.S. Custom Services to build an office in Sells. The agency, in turn, hired 25 tribal members as patrol officers. About 10 years later, the unit gained its unique name.

Verlon Jose, governor of the Traditional Tohono O’odham Leaders of Mexico and former vice chairman of the Nation, said Shadow Wolves are “protectors” and “warriors” with a unique personal commitment to what they do.

"The men and women who commit to track smugglers and stop the flow of drugs have a vested interest in their community," he said.

The Associated Press contributed to this story