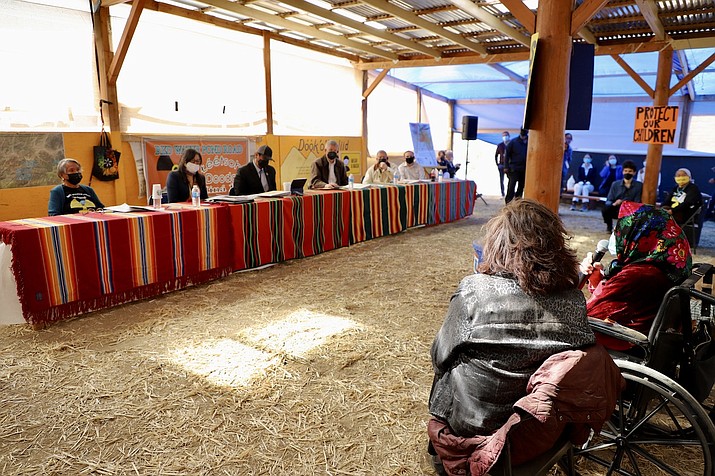 In 1979, the largest radioactive spill in U.S. history occurred at the Church Rock Mill releasing tons of uranium and radioactive waste into the nearby Puerco River, which continues to contaminate water and soil in Navajo communities where families reside including the rural Red Water Pond Road Community.

Last October, President Nez met with the Red Water Pond Road Community Association, which was founded in 2006 by Navajo residents residing near the Northeast Church Rock Mines, the Tronox Quivira Mines, and the United Nuclear Corporation Mill Site. The group spoke in opposition to the transfer of uranium mine waste from the Northeast Church Rock abandoned uranium mines to the Mill Site, located approximately one mile from the boundary of the Navajo Nation.

“Many Navajo people like the community members of Red Water Pond Road were raised and lived most of their lives amid mining activity or near abandoned uranium mines,” Nez said. “Men worked in the mines without protection, their mothers and wives washed their clothes which were covered with radioactive dust, and their children played in ponds which were filled with radioactive effluent. Today, you heard firsthand accounts of how their lives have been adversely impacted by the uranium mining that was vital to the security of the United States.”

Following the community meeting, the NRC held a formal meeting to receive an overview of the 2020-2029 plan to address the impacts of uranium contamination on the Navajo Nation.

Edith Hood, a member of the Navajo Nation representing the Red Water Pond Road Community Association, spoke about having been diagnosed with cancer due to uranium exposure. She recalled that as a child, she along with family members witnessed the uranium mining in their community, but were never warned about the dangers and health impacts. Hood was one of dozens of elders who voiced their frustration and concerns with the NRC.

“I am very grateful to our Navajo people who spoke very passionately about the heartache and frustration they’ve experienced due to uranium contamination and exposure for the majority of their lives,” Nez said. “Many of them have cancer and other health issues, and many spoke about the birth defects caused by the federal government’s uranium activities.”

Nez thanked Hanson and his team for making the unprecedented trip to the Navajo Nation to hear directly from our elders, families, and youth.

“There is much work yet to be done, but today’s discussions help to heal our people and move us closer to restoring the harmony and balance that our people seek,” he said.