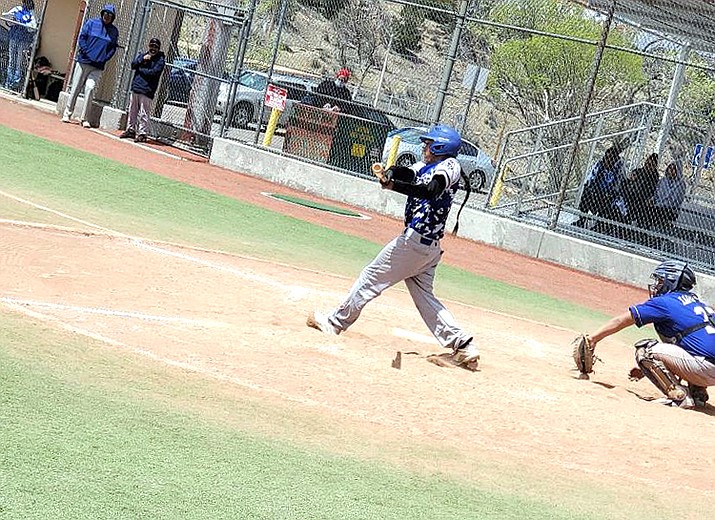 Junior Sedrick Laughing of Navajo Pine attempts a hit during a recent 2A game against Laguna-Acoma. The Warriors lost both of the doubleheader games. (Photo/Rickelle Laughing-Yazzie)

GALLUP, N.M. — The Laguna-Acoma Hawks got out to leads that they never relinquished, and beat Navajo Pine in doubleheader varsity baseball games played April 23 at Ford Canyon Park in Gallup.

“We had a few too many errors in the first game,” Navajo Pine head coach Lindsey Brown said. “I think had we not committed so many errors, the final score would’ve been a little different.”

The first few innings went normal and without a lot of fanfare, but the Hawks got hot at bat in the fourth when sophomore Quentin Lucero, juniors Seth Barger and Neal Kie, senior Marcel Martin, each scored on a hit to centerfield by senior Aiden Aragon.

The play injected some enthusiasm into the Hawks’ offense, and revealed some poor pitching by Navajo Pine. The Warriors didn’t get on the scoreboard until the fifth inning when freshman David Simpson came home on an error, putting the score at 5-1 in favor of Laguna-Acoma.

Both teams went through a bit of a lull in the sixth inning, until the Hawks scored runs on an RBI.

Neal Kie got the Hawks moving in the first inning, with an RBI that brought junior Johnny Sanchez in. Junior Caleb Riley then recorded an RBI for a 2-0 Laguna-Acoma lead. The game was playing out in favor of the Hawks, but the Warriors tightened their defense and prevented an onslaught.

Some erratic pitching by the Hawks drew an umpire warning on Navajo Pine fans about midway through the fourth. The small contingent was verbally critical of the home plate umpire.

Meanwhile, senior Marallus Chee scored for the Warriors when the Hawks’ catcher dropped a pop up hit by sophomore Ellson Peterson. The run took place after three consecutive Navajo Pine batters were hit by pitches in the second inning and during fan outbursts.

Things progressively got a bit more competitive and sophomore Emma Lee Aragon — the sole female on either roster — hit in freshman Dion Hershey for a 3-1 Laguna lead.

After sophomore Tyler Paul and junior Sedrick Laughing struck out, Tavian Nutlouis stole home for the Warriors. But Laguna came right back on a base hit by Kie, who hit in senior Nolan Suina.

Marallus Chee started at pitcher for the Warriors in Game 2 and had 9 strike outs and two walks.