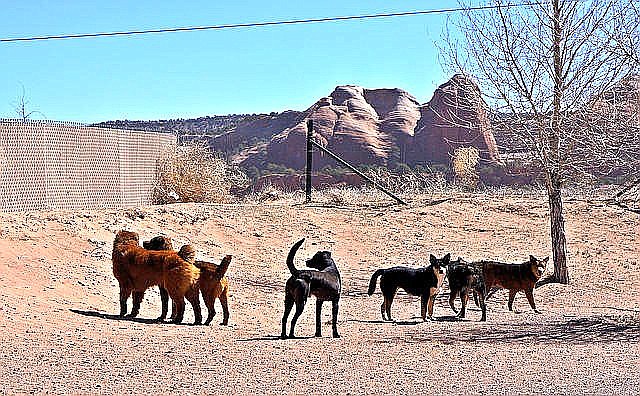 Aggressive dogs have become a serious concern on the Navajo Nation. A new law is hoping to help curb this situation. (Submitted photo)

WINDOW ROCK, Ariz. — According to the Navajo Nation Animal Control, there are more than 3,000 individuals treated each year by Indian Health Services and local clinics for animal attacks and bites on the Navajo Nation. Most of these individuals are children and the elderly.

Now, new legislation recently passed by the Navajo Nation Council goes before Navajo Nation President Jonathan Nez for approval that will stiffen the penalties for dog and other animal attacks on the reservation.

Legislation No. 0002-22, amending Title 17 was passed by the 24th Navajo Nation Council April 20 to specify a criminal nuisance offense and establish penalties for these dog attacks and for other dangerous animals running at large that cause injury or death on the Nation.

“It is alarming the number of stray dogs running at large across the 27,000 square miles of the Navajo Nation. Never again should one of our young people or elders be mauled to death or severely injured,” said Council Delegate Eugene Tso (Chinle). “Passing this legislation strengthens Navajo law to provide criminal penalties to deter people from keeping vicious dogs or other dangerous animals that can attack our loved ones. We urge President Jonathan Nez to sign this legislation into law immediately.”

In a comprehensive study by the Navajo Nation Animal Control, over the last five years, there has been an increase in the severity of dog bite cases. There have also been five deaths including a teenage girl in Fort Defiance in 2010, a 56-year-old near Gallup, an eight-year boy in Pine Hill, a 3-year-old boy in Seb Dalkai and a Kayenta woman who was reported by the Navajo Nation Police Department.

Records from the Navajo Nation Office of Environmental Health show an average of 247 dog bites a year in Tuba City alone over the course of the last five years.

According to the Navajo Nation Animal Control, 85 percent of field officers utilized their time responding to injuries to people sustained by dog bites and incidents of animal attacks.

The Navajo Nation Council passed legislation No. 0002-22 with 23 in favor and 0 opposed. Nez has ten days upon certification from the Legislative Branch to veto or sign the bill into law.