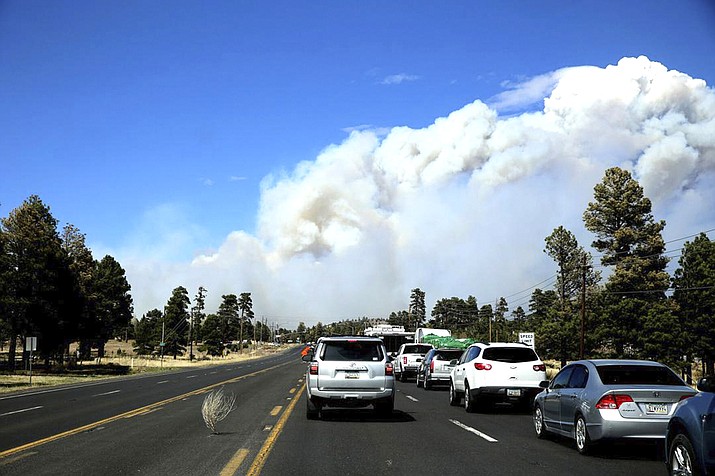 A tumbleweed rolls past a line of cars stopped ahead of a roadblock on U.S. 89 on the outskirts of Flagstaff, Arizona April 19, 2022. An Arizona wildfire doubled in size overnight into Wednesday, a day after heavy winds kicked up a towering wall of flames outside a northern Arizona tourist and college town, ripping through two dozen structures and sending residents of more than 700 homes scrambling to flee. (Jake Bacon//Arizona Daily Sun via AP)

FLAGSTAFF, Ariz. (AP) — Firefighters working to keep more homes from burning on the edge of a mountain town in northern Arizona were treated to scattered showers and cooler temperatures early Friday, but the favorable weather was not expected to last as more ferocious winds were forecast to batter parts of Arizona and all of New Mexico through the weekend.

Flames stretching 100 feet had raced through rural neighborhoods near Flagstaff just days earlier. It wasn't until Thursday that a break in the weather allowed authorities to enter the charred area to survey the damage. They found 30 homes and numerous other buildings had been destroyed, with sheriff's deputies saying more than 100 properties were affected.

Crews have cleared lines around much of the fire but they wanted to see if those lines hold before increasing containment numbers, fire spokesman Dick Fleishman said Friday.

Spirits were lifted Thursday as helicopters were able to start dropping water on that blaze for the first time. It has burned close to 32 square miles, forced evacuations of 765 homes and destroyed at least two dozen structures since it broke out on Sunday.

Aerial attacks also resumed in northern New Mexico on Thursday, where at least one airtanker was able to join the effort northeast of Santa Fe — something that will be impossible on Friday.

Fire managers there said that without air support and no crews working directly on the fire lines due to the weather, explosive growth was expected.

"It's definitely lining up to be a very dangerous situation," San Miguel County Sheriff Chris Lopez said during a community meeting Thursday night, pleading with residents to take the evacuation orders seriously.

Authorities on Friday morning started evacuating several tiny communities in the valleys northeast of the fire as officials expected it to overtake some of those areas by the end of the day. They said flames could spread as much as 13 miles in that direction. Several roads in the area were also closed.

Another fire burning in the northeastern corner of New Mexico also was forcing evacuations while residents in the town of Cimarron and the headquarters of the Philmont Scout Ranch, which is owned and operated by the Boy Scouts of America, were preparing to flee if necessary. The scout ranch attracts thousands of visitors every summer, but officials there said no scouts were currently on the property.

Sustained winds of 30-50 mph were forecast, with gusts from 60-80 mph in the afternoon from the Gila Mountains up through the Rio Grande Valley to neighboring highlands.

The combination of the high winds, warmer temperatures and extremely dry conditions will make for an atmosphere that's "pretty much on steroids," said Scott Overpeck with the National Weather Service in Albuquerque.

"This is not typical," he said, looking ahead to what he said could be potentially explosive fire growth on Friday. "This is really one of those days we need to be on our toes and we need to be ready."

Wildfire has become a year-round threat in the West given changing conditions that include earlier snowmelt and rain coming later in the fall, scientist have said. The problems have been exacerbated by decades of fire suppression and poor management along with a more than 20-year megadrought that studies link to human-caused climate change.

Colorado saw one of its most destructive wildfires last winter, when flames tore through two densely populated Denver suburbs. While crews in that state got a handle this week on two small wildfires, Gov. Jared Polis was scheduled Friday to talk about the ongoing danger and how state officials planned to deal with what was expected to be a significant fire season.

In Arizona, popular lakes and national monuments have closed — including Sunset Crater Volcano National Monument outside Flagstaff because the wildfire moved directly over it, blackening trees, and burning tools and vehicles in a maintenance yard, said monument spokesman Richard Ullmann.

The Coconino National Forest has closed the area where the wildfire is burning but has not enacted broader fire restrictions or closures. A sign at a gate warns of potential loose debris, falling trees and branches, and flash floods.