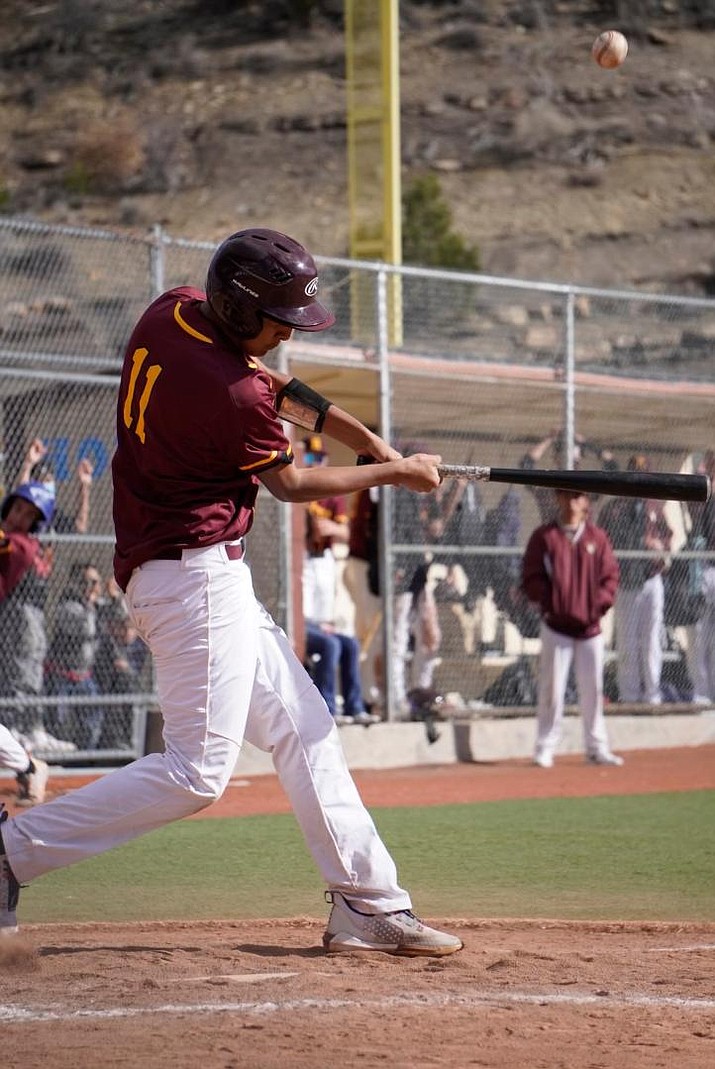 GALLUP, N.M. — The red-hot Rehoboth Christian School torched Menaul High School of Albuquerque in a varsity baseball doubleheader April 15 — beatings so bad that the opposing coach commented, “…they were just better than us.”

The Lynx won the first game 4-2 and blew out the Panthers in the second game, 5-0. Both final scores could’ve been higher had the Lynx taken advantage of several bases loaded scenarios.

Rehoboth plays its baseball and softball games in Gallup because they are without a facility. The win was the tenth in a row for the 2A Lynx whose sole loss this season was a 6-0 set back to 4A Gallup (3-11, 0-5) on March 29.

“Our guys have individual high baseball IQ’s,” Rehoboth Head Coach Anthony Sanchez said. “That was a large part of how how we won this game. That’s definitely an asset for this team.”

The Lynx (13-1, 2-0) got on the scoreboard in the second inning when sophomore Raeden West came home on a walk off. Rehoboth hit a lot of balls in the first few innings, and seemed to know when to hit and when not to. The team didn’t unnecessarily take swings while at bat and that has been a trademark of the season, Sanchez said.

The score ballooned to 3-0 when senior Isaac Zwiers scored on a hit by senior Talen West. Then the left-handed Morgan Arsenault recorded an RBI whereby sophomore Raeden West scored. Senior Mato Chapman hit a pop up to right field which was caught by Gordon Lee,but Rehoboth kept hitting and playing tough defense.

The third inning started with Rehoboth ahead 4-0. A cold batting drought didn’t last long for Menaul (4-2, 0-0), as freshman Ben Fernandez touched home on a hit by fellow freshman Zach Toledo. Junior Michael Neal hit in sophomore Jackson Buck and suddenly the Panthers were back in it — or at least they thought they had a chance.

But Rehoboth’s pitching tightened up and Menaul again went cold at bat. The Panthers picked up another run when junior Liam Byrd scored on an RBI by Buck.

A couple of errors in the fifth inning were costly for Rehoboth and the Panthers used the instance to gain some momentum.

Rehoboth’s infield and outfield defense put the team’s offense in good position at the start of the bottom of the first, and just in time for junior Antonio Rivas to send a ball to left field. The hit got over the head of the Menaul first baseman and enabled Rehoboth’s Raeden West to score a run.

Not long afterward, an infield error and hit brought in senior Talon West for a 2-0 run lead.

The Lynx seemed to be utilizing the high intellectual capacity that head coach Sanchez spoke about. The entire team doesn’t seem to panic in when the going gets tough.

“There is a lot that I don’t have to tell these guys because they’re already on top of things,” Sanchez said. “They work hard in practice and play harder in games.”

Some bad luck sat in when Rehoboth’s Keedah was hit by a pitch and 8th grader Kodah Chapman struck out looking. But Mato Chapman managed to score and the Lynx never looked back.

Lardizabal challenged a few calls and received a verbal warning by an umpire on one call argued pertaining to a stolen base. Arsenault later scored on an RBI for Rehoboth and the final 5-0 run count.