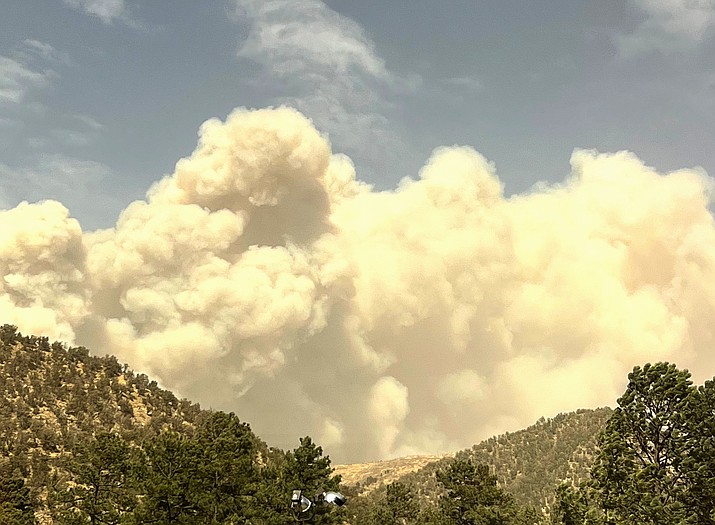 On April 12 shortly after noon the McBride fire broke out in the Village of Ruidoso. (Photo/McBride Fire Official Facebook page)

RUIDOSO, N.M. (AP) — A wind-driven wildfire swept through neighborhoods in a mountain community in drought-stricken south-central New Mexico, burning at least 150 structures and forcing the evacuations of schools with 1,700 students, officials said April 13.

Homes were among the structures that burned April 12 but officials did not have a count of how many were destroyed in the blaze that torched at least 6.4 square miles of forest, brush and grass on the east side of the community of Ruidoso, said Laura Rabon, spokesperson for the Lincoln National Forest.

No deaths or injuries were reported from the fire fanned by winds gusting between 50 mph and 90 mph, Rabon said. The cause of the fire was under investigation.

Ruidoso's high school and middle school were evacuated but didn't burn. Officials in the village declared a state of emergency for the community and said school classes were cancelled April 13 as the village coped with power outages due to down power lines.

The residences that burned were mostly a mix of trailers and single-family homes, and close to 4,000 people were displaced by evacuations. Village spokeswoman Kerry Gladden said authorities were out trying to survey as much damage as possible before, when winds were expected to gust again, raising the fire threat.

"Right now, everybody is just rallying around those who had to be evacuated," Gladden said. "We're just trying to reach out to make sure everyone has places to stay. Plus in the middle of all this, our village is still without power. Everybody is just trying to get the resources here on the ground where they're needed and get everyone fed."

Ruidoso in 2012 suffered one of the most destructive wildfires in New Mexico history, when a lightning-sparked blaze destroyed more than 240 homes and burned nearly 70 square miles.

However, no precipitation was in the forecast and humidity levels remained low, Rabon said.

"Those extremely dry conditions are not in our favor," she said.

Another wildfire in the Lincoln National Forest northwest of Ruidoso burned at least 400 acres after it was sparked April 12 by power lines downed by high winds, Rabon said.

Elsewhere in New Mexico, wildfires were burning along the Rio Grande south of Albuquerque, in mountains northwest of the community of Las Vegas and in grasslands along the Pecos River near the town of Roswell.