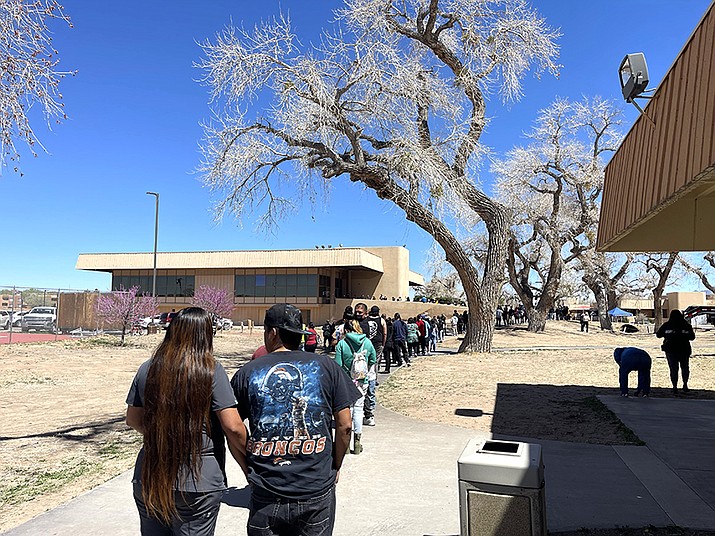 A line stretches outside the Southwestern Indian Polytechnic Institute April 7 with people seeking information about the status of their COVID-19 hardship checks. The Nation scheduled meetings with the public to help with unanswered questions. (Photo courtesy of Navida Johnson)

She called all the numbers listed on the Navajo Nation Office of Controller’s website trying to find out the status of her American Rescue Act (ARPA) hardship check. Johnson said the process was frustrating — there was no way to leave a message because the voicemail was full or service was lost — no one was communicating with her.

“That’s what bothers me the most,” Johnson said. “There’s no connection.”

The Office of the Controller said that has been their experience, too.

in the city, outside the reservation. I was like, ‘I’m not the only one going through this. What is going on?’”

Johnson said, as a student, it’s hard. She sometimes has to borrow money from people and a lot of other people are in the same situation as she is.

“A lot of us are students and for us, we are depending on this,” she said. “It’s not ok. We’re allowed to ask where this is at. Again, I don’t care if there’s a mix up, but communicate or else we’re going to lose trust.”

Another alarming thing Johnson heard was that the hardship checks were only good for 90 days after they had been printed.

“What? Are you kidding me?” Johnson said. “No one communicated that. So what if it went to my old address and let’s just say it got returned. There’s a good month out of the way of it connecting with me. I’m screwed.”

Johnson said it is not only the lack of communication that is frustrating, but also the lack of responsibility on the Nation’s part. She said the responsibility all seems to be on the people waiting to receive their check — they have to take time out of their day to track down information.

Previous drives were held in Tucson and Phoenix. Due to the very high demand for services, more dates will be announced for more technical assistance events in Phoenix.

In fact, Johnson had found out about an informational meeting at Southwestern Indian Polytechnic Institute (SIPI) in Albuquerque not from the Navajo Nation website or Facebook page or from the Office of the Controller, but from her school, UNM. It was billed as being for first-time recipients, but she was told they might be able to answer her questions.

“It wasn’t until I reached out to my own school (until I found out) it was going on,” she said.

Johnson told UNM that she believed the school administration or the American Indian student service should advocate on behalf of students. They agreed, but said there was only so much they could do.

The line outside of SIPI eventually reached a few hundred people, more when Johnson finally emerged, than when she went in.

She’d finally gotten answers. Her change of address had been processed. Her check hadn’t been printed yet, but should be any day. She was relieved, but still believes there should be changes in the system.

“It’s still unacceptable that I had to do all this work,” she said. “They should be paying me.”

Johnson said the people at SIPI’s informational meeting thought the event had been posted on the president’s website and Facebook page. But it hadn’t.

“These are big things that we need to know about, even it means posting it on social media,” she said. “Some people just only use that. This is a lot of work. It really is. If there’s one thing I’m going to say about myself, I really am accountable. I follow through. But I do expect some kind of reciprocation.”

Johnson said she hopes some attention to the issue will help everyone who is still waiting.

“The whole intention of this wasn’t to try and prove the controller’s office wrong. Or to put them in a bad light,” she said. “There is a failure of communication at some part of the chain. We need to bridge that. If my outreach helps in that way, that’s good.”

The President’s Office and the Office of the Controller said they appreciate everyone’s patience.

“We ask people to remain patient and understand that our staff are working as quickly as possible to process checks, take in new applicants, process change of address requests and many other issues that come up daily,” the president’s office stated.