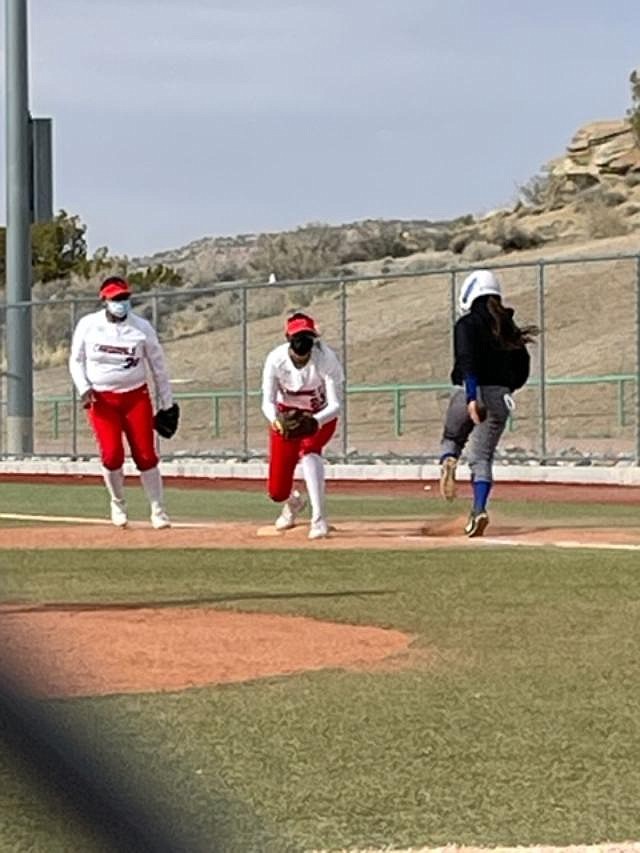 Both games were called in the sixth inning with the scores at 10-0, 10-0. An Arizona Interscholastic Association rule exists whereby if one team records 10 runs and the opposition none, then it’s a ball game by the end of the sixth.

The game’s seniors were honored between games with gifts.

The first game started somewhat slow, in terms of runs scored. But as the innings progressed, Saint Michaels (10-4, 5-1) found a weakness and it was the pitching of the Lady Lynx (4-5, 3-4).

Senior Nayauna Zah scored first for the Lady Cardinals in the second inning on an RBI by fellow senior Jessica Terry. The play occurred on a 3-1 pitch.

“We hit very well,” Saint Michaels head coach Karen Tom said afterward. “We were careful at the plate and hit the right pitches at the right times.”

Meanwhile, the left-handed starting pitcher Gabriella Simpson of the Lady Cardinals managed the game very well. In the second inning, throwing an assortment of sliders and change ups, Simpson struck out Fredonia seniors M.J. Cliff and Charlie Anderson back-to-back — the latter of whom struck out swinging.

The Lady Lynx were able to control things a little better in the third, and found a spark in the top of the fourth when senior Kaliese Tait hit a double to left field.

But the spark was short-lived and Fredonia’s pitching continued to suffer. The Lady Cardinals loaded the bases multiple times in the fourth inning, with senior Kalani Wilson recording an RBI for a 2-0 cushion. Wilson later scored, and had Saint Michaels capitalized with the bases loaded the score would have been a lot higher.

Saint Michaels’ sophomore Autumn Shirley attempted a bunt in the fourth and with the bases loaded, but couldn’t convert. The fifth inning saw the Lady Cardinals turn things up a notch at bat. Senior Jenna Ross scored on a hit by fellow senior Paige Gonnie. Gonnie eventually stole home, and the rout was on.

With the score at 7-0 in the fifth inning, Fredonia just wasn’t able to get consistent hits.

“Our bats couldn’t get hot,” Fredonia head coach Mike Waters said. “That, and we committed a few too many infield errors.”

Zah stole home and the hits and runs just kept coming for Saint Michaels before the game was called.

The top ranked teams in 1A North are Williams, Joseph City and Saint Michaels. The Lady Cardinals play Williams April 22 and the outcome of that game will determine a new rankings order.

The second game of the April 9 doubleheader softball game between Saint Michaels and Fredonia was, literally, more of the same for both teams. The Lady Lynx changed pitchers, but that didn’t work out.

The Lady Cardinals got a 1-0 lead after Kalynn Smith touched home base on an RBI by Gabriella Simpson. And Santana Dalgai stole home for a 2-0 Saint Michaels lead. The Lady Cardinals held a 4-0 lead going into the second inning.

Fredonia couldn’t get things going at the plate or on the mound. The unforced errors cost the team as well.

Simpson threw all the right pitches and at the right times. As was the case in the first game, Fredonia loaded the bases too many times and committed a few too many errors. When senior Jessica Terry stole home for a 5-0 Lady Cardinals lead, things looked beyond bleak for Fredonia.

Sophomore Cameron Hanley and Terry later scored for Saint Michaels, and the hits just kept coming and to the detriment of Fredonia. Junior first baseman Madison Begay scored on an base hit by Ross and that wrapped up the doubleheader.

Hanley hit a double and brought in Ross for an 8-0 lead in the bottom often fifth inning.