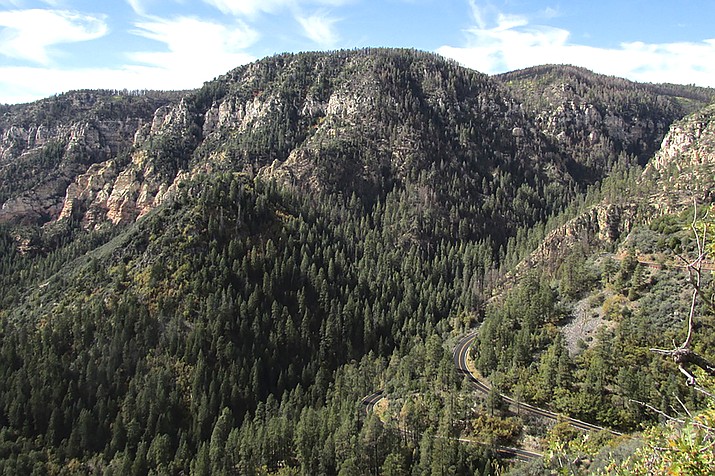 Switchbacks of U.S. 89A, a scenic highway in north-central Arizona, hug a cliffside of Oak Creek Canyon as it descends between Flagstaff and Sedona, Ariz., on Oct. 18, 2014. Several projects planned along one of Arizona's most scenic highways will include a safety tune-up and structural improvements but also is expected to inconvenience area residents and travelers using the two-lane route in the steep-sided canyon. The work planned by the Arizona Department of Transportation for U.S. 89A through Oak Creek Canyon north of Sedona and south of Flagstaff will begin this spring and run well into 2023. (AP Photo/Paul Davenport)

FLAGSTAFF, Ariz. — Projects planned for one of Arizona’s most scenic highways that will include a safety tune-up and structural improvements are expected to clog traffic along the two-lane route during work set to begin this spring and run into 2023.

The work by the Arizona Department of Transportation for U.S. Route 89A through Oak Creek Canyon between Sedona and Flagstaff includes rockfall mitigation, drainage and sediment control and rehabilitation of a bridge, the Arizona Daily Sun reported.

To accommodate the work, people traveling through the steep-sided canyon can expect major traffic flow restrictions and a limited number of full closures.

It’s already sometimes difficult to pass through the canyon’s tight quarters, which include a near-corkscrew climb or descent at the north end.

The canyon’s trails and swimming holes are popular with hikers and day-trippers during the summer while its colorful vistas of fall foliage pull crowds of admirers.

The work along a 14-mile span is much needed, Brendan Foley, assistant district engineer for ADOT’s Northcentral District, said during a recent public information meeting.

“All three improvements are vital to preserving the integrity and safety of the highway,” Foley said.

The project includes work to stabilize areas known for rockfalls that can happen without warning and pose safety risks for people traveling along the highway and force the roadway to be closed for hours while crews clear obstructions and debris.

It should also address the deteriorating slopes along the roadway — which should reduce the potential for mud and rock slides and improve the quality of the water flowing through the canyon.

The Pumphouse Wash Bridge project is aimed at improving the structural integrity and extending the life of the bridge constructed in 1931 by an estimated 25 years.

All three projects will take on different timelines, which await approval by ADOT and the contractor, but everything is slated to be completed by late 2023, with a possible break in work next winter.

During the work, the road will mostly remain open, but officials said traffic will be restricted, with the roadway narrowed to one lane through the work zones with alternating northbound and southbound travel. Flaggers will control traffic, and temporary concrete barriers will be used for lane restrictions.

ADOT officials said residents can anticipate up to five daytime and 10 overnight full closures from Sunday through Thursday. Foley said notice of the closures will be provided at least seven days in advance.

“We recognize these restrictions and full closures, in particular, are inconvenient for everyone,” Foley said. “Unfortunately there is no way to do these projects without some closure and extended lane restrictions.”

ADOT officials noted that the full closures won’t take place over the weekend, on holidays or when there’s a major event in Sedona.

That left some feeling like the priority was on visitors, not full-time residents.

Others worried about how the restrictions and closures will impact their lives, citing concerns about upcoming travel and public safety. Project heads, however, clarified emergency services will still be able to get through when needed.

When the highway is closed, Interstate 17 and State Route 179 provide an alternate but significantly longer route between Sedona and Flagstaff.