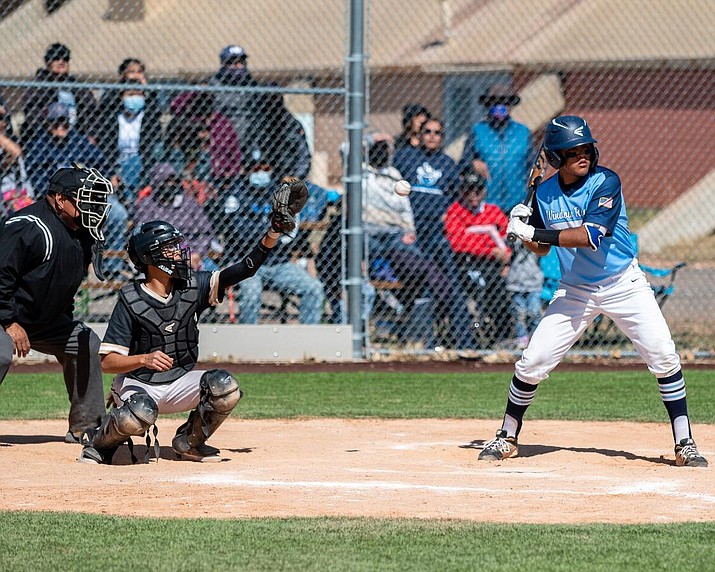 The Chinle Wildcats sweep the 3A North doubleheader over the Window Rock Fighting Scouts April 1, with scores of 13-1 and 13-8. (Photo courtesy of Lee Begaye)

WINDOW ROCK, Ariz. — The Chinle Wildcats returned to Fighting Scouts Field April 1 for the first time in more than a year and wasted no time at bat, in the infield or on the mound.

The Wildcats picked up the 3A North doubleheader sweep in dominating fashion over Window Rock, 13-1 and 13-8. Wildcats junior pitcher and shortstop Shaydin Tsosie received big-time accolades from both head coaches.

“We hit very well,” Chinle head coach Charles Kimbrough said. “Our defensive effort was good and our pitching was fantastic. (Shaydin) deserves a lot of credit for how he played in both games.”

In the second game of the doubleheader, senior Caleb Tsosie scored first on an error to give Window Rock a 1-0 lead. The Fighting Scouts came out for the second game with a more aggressive approach, but so did Chinle. And that dichotomy made for a very competitive game.

Window Rock gave up a few walks in the first three innings, due mostly to batters being hit by pitches. Freshman Xavier Gray got some momentum going when he hit a long ball to mid-center and brought in senior Noah Haven and junior Elijah Morgan for a 2-1 Fighting Scouts cushion.

The Wildcats did not panic. In fact, the team was very loose on the sidelines.

“We had some ups and downs with regard to pitching,” Wauneka said. “But give credit to Chinle.”

The Wildcats steadily loaded the bases on base hits and doubles. The score ballooned to 11-8 by the beginning of the sixth inning. Meanwhile, Tsosie was striking out or just throwing incredibly hard-to-hit pitches. On one play in the fifth, Tsisie ran down a foul ball left of the catcher’s box, another turning point and a play, which showed individual effort and hustle.

Guy hit another long ball to deep center, while not a home run the play brought in Isiah Guy and Kee for a 13-8 lead.