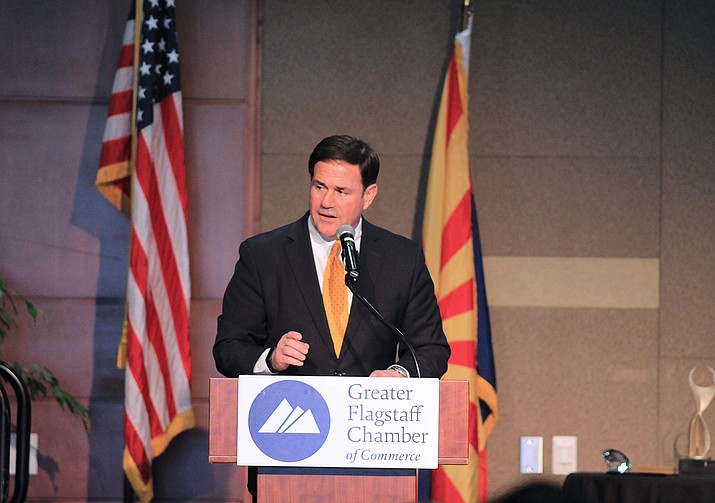 "In Arizona, we know there is immeasurable value in every life, including preborn life,'' the governor said in a letter explaining his decision to sign the measure curbing the right of women to terminate a pregnancy. "I believe it is each state's responsibility to protect them.''

There is no exception in SB 1164 even in cases of rape or incest.

At a press conference later, however, Ducey rejected questions of whether he was forcing women who have been raped or are the victims of incest to carry the baby to term and give birth. He said any prior statements he has made about exceptions in those cases apply only if abortions were totally outlawed.

"This law has availability,'' he said, keeping the procedure legal through the 15th week of pregnancy.

There is some data to support the idea that the law would not affect most women.

In 2020, the most recent year for which figures are available, the Arizona Department of Health Services reported there were 13,186 abortions performed on state residents. Of that total, just 636 were beyond 15 weeks of pregnancy.

But the Planned Parenthood Action Fund said in a prepared statement that the "longstanding racist policies in the state and in our nation'' mean SB 1164 will have a greater impact on minority communities as well as those with low incomes and rural residents.

"They are more likely to struggle to secure the funds, find child care, and take time off to work to travel out of state if they need to seek care after 15 weeks,'' the statement reads.

The law makes it a Class 6 felony, punishable by up to a year in state prison, for doctors to perform abortions after 15 weeks. The only exception is in cases where there is risk of the death or serious bodily injury to the woman.

Nothing in the measure, however, imposes any criminal penalties on a woman who gets the abortion.

SB 1164 is, for the moment, legally unenforceable as it runs afoul of long-standing U.S. Supreme Court precedents dating back to 1973 that say a state cannot interfere with a woman's choice prior to the point when a fetus becomes viable. That generally occurs somewhere around 22 to 24 weeks.

But the Arizona legislation is built on the premise that the high court later this year will uphold a virtually identical Mississippi law. And the governor said the ban at 15 weeks "brings us much more in line with the rest of the industrialized and civilized world.''

Ducey also inked his approval to SB 1165 which requires public schools and any private schools that compete against them to designate their interscholastic or intramural sports strictly as male, female or coed. And, more to the point, it specifically says that teams designed as for women or girls "may not be open to students of the male sex.''

"It's about fairness, pure and simple,'' he said. "And it's also about protecting girls' sports and protecting female sports.''

The governor denied that it was denying any opportunity to transgender girls, saying they remain free to compete on coed teams.

"It's a way where all can participate,'' Ducey said. "But those that are in competitive environments can have a level playing field.''

The move comes despite the fact that the Arizona Interscholastic Association which governs high school sports already has protocols to handle requests by transgender athletes to participate in sports on a case-by-case basis. Factors include a student's "gender story,'' including the age at which they became aware of the "incongruence'' between the sex assigned at birth and gender identity and whether the student is undergoing gender transition.

And Dr. Kristina Wilson, who serves on the AIA's medical advisory board, testified that out of 170,000 high school athletes there have been just 16 requests by transgender individual to complete.

The governor, however, lashed out at the organization for even allowing any transgender youth to participate.

That reference to the NCAA, which governs college athletics, stems from the ability of Lia Thomas, who as a University of Pennsylvania student, went from competing on the men's team to the women's team and became a top competitor.

Ducey also brushed aside the fact that the governors of Indiana and Utah, both Republicans, vetoed similar legislation in their state.

Utah Gov. Spencer Cox, in his veto message, said there were so few of these cases of transgender athletes that these decisions should be left to the organization that governs interscholastic athletics in his state. And Cox, whose veto was later overridden, also cited figures that show 86 percent of transgender youths have considered suicide, with 56% actually making an attempt.

Asked about that, Ducey said there is "great concern for and great empathy for those situations.'' But that didn't change his mind.

In signing SB 1138 on gender reassignment procedures, Ducey pointed out that the measure does not prohibit doctors from providing puberty-blocking hormones or any other hormone therapy to minors. What is does preclude is any surgical procedures until the person turns 18.

"SB 1138 delays any irreversible gender reassignment surgery until the age of 18,'' Ducey explained.

"The reason is simple and common sense,'' he continued. "This is a decision that will dramatically affect the rest of an individuals' life, including the ability of that individual to become a biological parent later in life.''

And Ducey said there's nothing wrong with providing different standards between what adults can do with their bodies versus what can happen with children, even in cases where the parents agree.

"Throughout law, children are protected from making irreversible decisions, including buying certain products or participating in activities that can have lifelong health implications,'' he said. "These decisions should be made when an individual reaches adulthood.

The governor also said that many doctors who perform these procedures have concluded it is not "within the standards of care'' to do so on children.

That veto already is drawing threats of litigation from the American Civil Liberties Union and the National Center for Lesbian Rights.

"This is a harmful law that wrongly allows the government to dictate medical care for transgender youth in Arizona,'' said Asaf Orr, senior attorney for NCLR.

"Parents want what's best for their children,'' Orr said. "They don't need the state of Arizona seeking to take over their parental role.''

But Emilie Kao, senior vice president for Alliance Defending Freedom, a Christian public interest law firm that has previously defended some Arizona statutes, said the bill protects the ability of children "to have a natural childhood, free from the pressure to undergo surgical procedures that leave them permanently sterile and physically marred for life.''