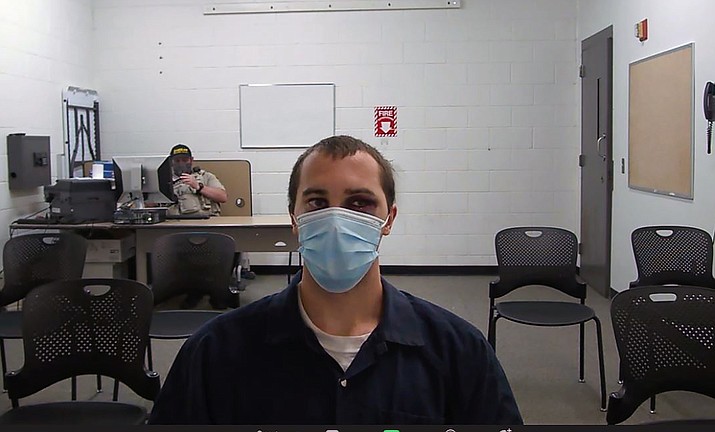 FLAGSTAFF, Ariz. (AP) — The brother of a U.S. Air Force airman on trial in the death of a Mennonite woman testified Sept. 29 that the defendant asked him to remotely scrub information from his cellphone shortly before he was arrested and later charged with kidnapping and murder.

Samuel Gooch's testimony came as the trial against his younger brother, Mark Gooch, reached its scheduled halfway point. A Coconino County Superior Court judge issued an order to compel Samuel Gooch to testify after he said he would invoke his right against self-incrimination. He was granted prosecutorial immunity.

Mark Gooch faces up to life in prison if he's convicted of first-degree murder and other charges in the death of Sasha Krause, 27. She disappeared from a Mennonite community where she was living in Farmington, New Mexico, in January 2020. Her body was found more than a month later in a forest clearing outside Flagstaff, Arizona.

Prosecutor Ammon Barker pressed Samuel Gooch on about 90 minutes of phone conversations he had with Mark Gooch the day Krause went missing, but Samuel Gooch mostly responded that he didn't recall anything of substance. He also didn't reiterate a statement he made to investigators last year about Mark Gooch holding a grudge against Mennonites.

"I can't necessarily speak to what Mark's feelings might have been," he said.

Samuel Gooch said he and Mark Gooch sometimes discussed aspects of Mennonite life they disagreed with, and negative feelings came up. They grew up in Wisconsin in a Mennonite community, but neither officially joined the church.

"My memory of the experience would have been, it was easy to feel that we were less accepted into that culture since we were not necessarily born into it, not multigenerational family that had been in the Mennonites for decades," he said.

Jurors did not hear details of a separate but related case involving Samuel Gooch. Authorities accused him of flying to Arizona from Wisconsin last year to pick up what he thought was the .22-caliber rifle used to shoot Krause. Samuel Gooch pleaded guilty to a reduced charge of facilitation to commit hindering prosecution and is on probation.

On the witness stand Wednesday, Samuel Gooch said Mark Gooch asked him to remotely clear his cellphone and SD cards, as well as how to deactivate his Google account. Investigative records show Mark Gooch deleted his location history from a Google account.

Barker has argued Mark Gooch was motivated to kill Krause because he had a general disdain toward Mennonites and tried to cover his tracks after the killing. Griffen has said his client engaged in text message banter with his brothers and had visited at least three churches in search of fellowship.

Jurors also heard Wednesday from the medical examiner who oversaw Krause's autopsy, a state crime lab employee who collected samples from Gooch's car, and a sheriff's employee. Krause's parents turned away as photos of their daughter were projected onto a screen.

Medical examiner Michael Madsen said Krause had been hit with a blunt object and shot in the back of the head.