KYKOTSMOVI, Ariz. — First Mesa and Second Mesa could have clean drinking water running to their villages and homes by March or April, according to Hopi Tribal Councilman Ivan Sidney.

The clean water is needed because First Mesa and Second Mesa have had too much arsenic in their water for decades. The amount of arsenic in the water is above federal standards. 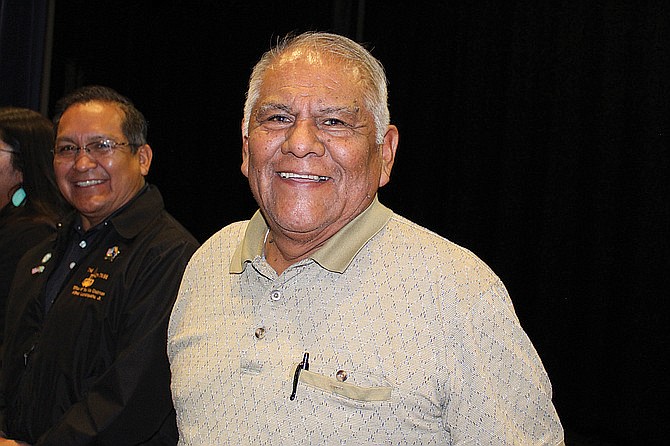 Hopi Tribal Councilman Ivan Sidney is concerned about the quality of drinking water on First Mesa and Second Mesa on the Hopi reservation. (Photo/NHO)

Councilman Sidney said when the BIA started drilling wells for Hopi in the 1930s it had arsenic in the aquifers that were being used.

“Nobody was regulating the water at the time,” he said.

Arsenic occurs naturally in most water, but can be extremely toxic when there is too much arsenic.

In the 1970s, the Clean Water Act established the EPA and gave them oversight of the drinking water throughout the U.S. including the reservations. At the start, the water on Hopi was in compliance, but the EPA eventually raised the standards and Hopi had too much arsenic in the water.

Hopi found good water at the N aquifer, which was considered pristine, but Navajo Generating Station used the water for its coal slurry. The water table declined and that water was barely reaching Hopi.

Around 2012, the EPA notified First and Second Mesa that they were not in compliance with water regulations because there was too much arsenic and if they did not find another water source that the village could be fined $2,000 per day.

“That got First Mesa and Second Mesa’s attention,” he said. “The tribe was not that concerned because the tribal government did not operate a public water system.” The water systems were operated by the villages.

However, the Hopi Tribe owns the Hopi Cultural Center and its water was in violation so the tribal government became involved. The Hopi Tribe’s lawyer at that time communicated with the EPA that a grant was needed to bring water to the villages at First Mesa and Second Mesa.

Sidney, an engineer and officials from Second Mesa worked with the EPA to come up with a plan on the design.

“The idea was to come up with a plan to get off the arsenic and replace the water source,” he said.

In 2015, a plan was approved contingent on finding a new water source.

“But we were getting concerned because it was taking too much time and we could be cited any day,” he said.

Sidney said the process was slow, but First Mesa had the biggest population and the most amount of homes so it received the most attention with the understanding that any water that was brought in would also service Hopi Jr/Sr High School and Hopi Health Care Center.

Because of the slow process and the pending fines, Hopi asked Navajo Tribal Utility Authority (NTUA) for help since they were already bringing water into Jeddito which is not far from Keams Canyon and Polacca. He said since the BIA in Keams Canyon needed water that the federal government became involved.

Then Hopi Chairman Herman Honanie and traditional leaders decided the proposal was becoming too costly and to go their separate way so the Hopi Arsenic Mitigation Project was born.

In 2018, the design for the water system was completed and the funding from the federal government was available. In 2014, one well was drilled for Indian Health Services, but pipes broke so a second well was needed. This was in the area north of the cultural center known as the Turquoise Trail. So, Hopi created the Hopi Utility Corporation similar to NTUA so water could be regulated. Engineer Jim Modell was hired as director.

Modell discovered that the water would flow downhill to First Mesa so no pumping was needed. Another pipeline would serve the three villages at Second Mesa.

“Currently, those pipelines are laid and completed. A new tank is being built at First Mesa and one for the Hopi Utility Corporation,” Sidney said. “Another tank will be at the well site. I expect the water to be flowing into First and Second Mesa by March or April 2022, but there is still work to be done.”

Sidney said 80 percent of the construction is complete, but once the water reaches First Mesa that the wells have to be sealed. He said the waterline will continue to Keams Canyon for the BIA and Hopi Jr/Sr High School.

Sidney said First Mesa currently has its own well, but it has too much arsenic.

Sidney said the law requires them to install water meters into the homes so they will be billing the users off the water meter with the intent of saving water.

He said First Mesa is also working on proposals to rebuild sewer lagoons and the Hopi Tribe could receive $90 million out of covid funds since that source is especially for water, sewer and broadband.

“It has been difficult. We were under the gun of serving health risk water, but we had no choice because we had nowhere else to go, so this was a blessing,” he said.

Sidney said the Hopi Utility Corporation is looking into setting up their own commission so they could apply for grants.

“This would be huge because we need a professional administration. We need to turn to a corporation so we all can benefit,” he said.

Sidney said operating the water system is hard because it has to work 24/7 and it is expensive.

“We don’t get much money so it’s hard to operate. When pumps go out it’s very expensive,” he said.

Sidney said that the lack of water has made it hard to bring in new businesses, but with the new water source coming they are making plans for more businesses.

Sidney was sworn into office in August after then Councilman Wallace Youvella Sr. passed on. Sidneys term will expire Nov. 30.