New push on to expand nuclear radiation compensation for downwinders 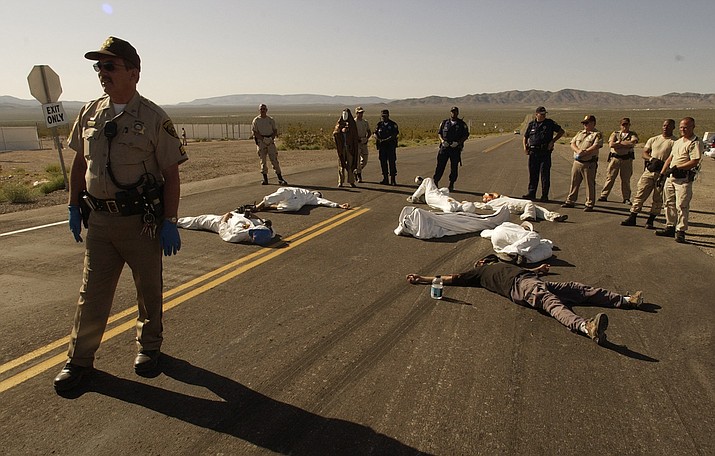 Protesters lie on the pavement opposed to the proposed Yucca Mountain nuclear storage facility and weapons testing after crossing the line into the Nevada Test Site at Mercury, Nevada, and were arrested for trespassing about 70 miles north of Las Vegas in 2003. Advocates have been working to bring awareness to the lingering effects of nuclear fallout on the Navajo Nation and in New Mexico. (AP Photo/Joe Cavaretta)

ALBUQUERQUE, N.M. (AP) — A bipartisan group of lawmakers is renewing a push to expand a U.S. compensation program for people who were exposed to radiation following uranium mining and nuclear testing carried out during the Cold War.

Advocates have been trying for years to bring awareness to the lingering effects of nuclear fallout surrounding the Trinity Site in southern New Mexico, where the U.S. military detonated the first atomic bomb, and on the Navajo Nation, where more than 30 million tons of uranium ore were extracted over decades to support U.S. nuclear activities.

Under legislation introduced Sept. 22 by U.S. Sens. Ben Ray Luján, a Democrat from New Mexico, and Mike Crapo, a Republican from Idaho, other sites across the American West would be added to the list of places affected by fallout and radiation exposure. Eligibility also would be expanded to include certain workers in the industry after 1971, such as miners.

The legislation also would increase the amount of compensation someone can receive to $150,000 and provide coverage for additional forms of cancer.

A multibillion-dollar defense spending package approved last year included an apology to New Mexico, Nevada, Utah and other states affected by radiation from nuclear testing, but no action was taken on legislation that sought to change and broaden the compensation program.

Advocates, including those who testified before Congress earlier this year, say it’s time to do so, especially because the existing provisions are set to expire next July. The legislation would extend the Radiation Exposure Compensation Act, or RECA, another 19 years.

Tina Cordova, a cancer survivor and co-founder of the Tularosa Basin Downwinders Consortium, said she has been working on the legislation for months with other residents of places affected by radiation, from Indigenous communities in New Mexico to Gaum. 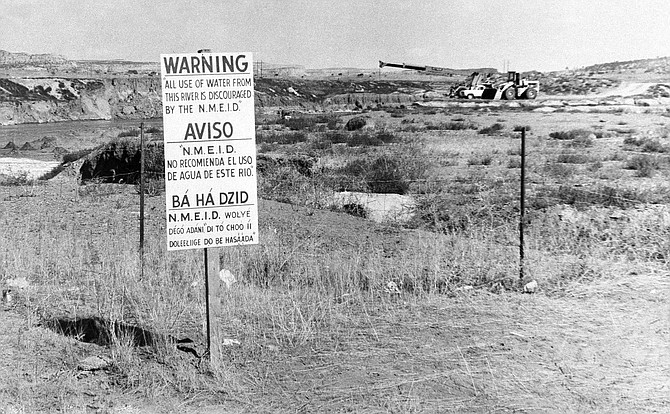 In this Nov. 13, 1979, file photo, United Nuclear Corp. uses a combination of hand work and heavy machinery to clear up a uranium tailings spill along the Rio Puerco, signs warn residents in three languages to avoid the water in Church Rock, New Mexico. (AP Photo/SMH, File)

“We put forth language to make certain the bill went far enough to help as many people as possible,” she said. “This is a make-or-break time for all the downwinders and post-71 uranium workers that have been left out of the original RECA bill.”

While efforts to expand the program have been years in the making, advocates say there is broader interest now because more people would stand to lose access to compensation funds if the law expires. They also acknowledge that some members of Congress might argue that there’s not enough money to bankroll the proposal.

“We won’t settle for that answer any longer. Imagine the insult added to our injury of such a statement,” Cordova said. “There is always money when there’s political will. This is a social, environmental and restorative justice issue that we, as a nation, can no longer look away from.”

On the Navajo Nation, uranium mining has left a legacy of death, disease and environmental contamination. That includes the largest spill of radioactive material in the United States, when 94 million gallons of radioactive tailings and wastewater spewed onto tribal lands in the Church Rock area in western New Mexico in 1979. It happened just three months after the partial meltdown of a nuclear reactor at Three Mile Island in Pennsylvania, which got far more attention at the time.

With hundreds of abandoned uranium mines and radioactive waste still to be cleaned up, Navajo Nation President Jonathan Nez said residents of the nation’s largest Indigenous reservation have been exposed to dangerous levels of radiation for years and have endured a wide range of illnesses as a result, with some dying prematurely.

Nez called an expansion of the program and extension of the trust fund a matter of justice.

“We look forward to advocating for the advancement of this legislation and to encourage consideration of additional provisions that would advance the objectives of justice and fairness represented by this bill,” he said.