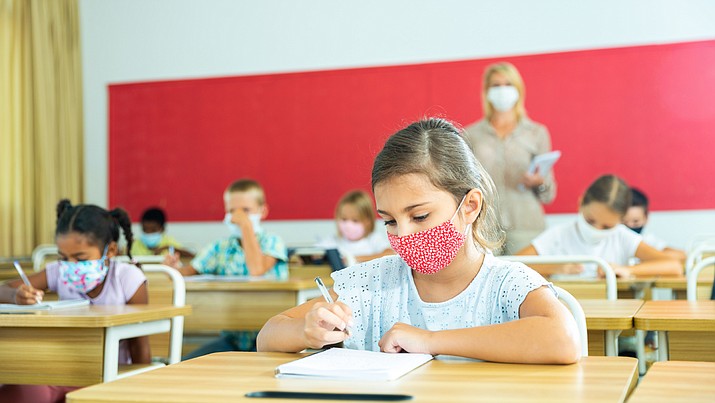 A new state law barring schools from imposing mask mandates on students and staff is unconstitutional, a judge ruled Sept. 27.

In a broad decision, Maricopa County Superior Court Judge Katherine Cooper also voided a host of provisions in laws approved by the legislature and signed by Gov. Doug Ducey in the waning days of the session that all were supposed to take effect Wednesday.

These range from requirements for anti-fraud measures for ballots and prohibitions against cities and town from requiring face coverings or imposing curfews to banning proof of vaccination to attend universities or community colleges, and limits on teaching what lawmakers have incorrectly referred to as “critical race theory.”

Cooper did not find that any of these provisions, by themselves, is illegal.

What is, she said, was piling them into four separate so-called “budget reconciliation” bills, each with what she said are broad, generic titles that fail to inform voters of the changes they enact.

And Cooper said there are separate constitutional requirements that legislation deal with only a single subject.

“Together these requirements promote transparency and the public’s access to information about legislative action,” she wrote.

“It’s the duty and authority of only the legislative branch to organize itself and make laws,” he continued. “Unfortunately, today’s decision is the result of a rogue judge interfering with the authority and processes of another branch of government.”

But Cooper addressed — and brushed aside — claims that how legislation is crafted is a “non-justiciable political question” beyond the reach of her and the courts to conclude whether lawmakers are exceeding their constitutional powers.

“The issue here is not what the legislature decided but how it decided what it did,” she wrote. “Whether the legislature complied with the requirements of (the Arizona Constitution) and whether a provision is reasonably related to ‘budget reconciliation’ are questions properly before the court.”

“It’s unfortunate that left-wing groups want to undermine the legislative process and indoctrinate our children with critical race theory and force vaccines on those who don’t want them,” he said.

But the decision, particularly about masks, was cheered by state schools chief Kathy Hoffman.

“With this ruling, Arizona school leaders, educators and community members can come together to make the best decisions on public health, safety and education,” she said in a prepared statement. And Hoffman urged supporters of the ban not to appeal.

“Our school communities are tired of being political pawns in dangerous attempts to subvert democracy and ignore science,” she said.

Monday’s ruling does more than void the challenged sections of the laws. Unless overturned, it also quashes the practice lawmakers use of piling apparently unrelated issues into bills in an effort to corral the votes for the entire package.

“This is classic logrolling — a medley of special interests cobbled together to force a vote for all or none,” the judge said. And banning that could result in difficulty in getting approval of future controversial measures.

At the heart of the legal fight are “reconciliation” bills.

The Arizona Constitution prohibits policy changes from being included in the actual budget. So, for example, allocating a certain amount of money for school construction goes into the budget. Instructions on guidelines for giving out the cash, however, go into a reconciliation bill.

Cooper, however, said what’s in these bills hardly qualifies. And she cited that constitutional requirement for a bill’s official title reflect what is included.

Attorneys for the state argued that she should interpret that requirement broadly. So, in the case of a “health” budget reconciliation bill, they said that can include anything related to health.

“That is not correct,” Cooper wrote. “The legislature has discretion to title a bill but, having picked a title, it must confine the contents to measures that reasonably relate to the title and each other to form one general subject.”

More to the point, Cooper said, the title of the bill “must be worded so that it puts people on notice as to the contents of the bill.”

“It should enable legislators and the public upon the reading the title to know what to expect in the body of the act so that no one would be surprised as to the subjects dealt with by the act,” she said.

That, Cooper said, did not occur here.

Also in that same bill, she noted, was the restrictions on what can be in public school curriculum — the so-called ban on teaching critical race theory — as well as authorizing lawsuits against public employees for what she called “vaguely defined conduct related to public schools.”

“What do these measures have to do with the budget?” Cooper asked.

And she took a particular slap at arguments that banning mask and vaccine mandates in public and charter schools is related to the budget because it may “potentially reduce overall enrollment and funding,” calling that “particularly disturbing” and unsupported by the legislative record.

“More concerning is the suggestion that the legislature would see this provision as a means to de-fund public and charter schools by discouraging staff and student attendance,” she continued. “There is no question that the bill’s title provide no notice of that policy measure.”

But Cooper did leave intact other provisions of that bill that she concluded did meet the constitutional requirements for a single subject and proper title, such as a change in the formula for state aid to schools.

The judge was no more impressed by arguments defending the legality of a separate bill labeled as “relating to budget procedures.”

Among its provisions are “fraud countermeasures” for paper ballots, stripping Secretary of State Katie Hobbs of her ability to defend challenges to state election laws, directing Hobbs to seek permission from the federal Election Assistance Commission to require proof of citizenship for those registering to vote only in federal elections, and even setting up a “special committee” to review the results of the audit of the 2020 election.

“So what do ‘fraud countermeasures’ in ballots have to do with a procedure for the budget?” Cooper said. “How does proof of citizenship on a federal form advance a budget procedure?”

And that, she said, does not address the separate violation of the constitutional requirement that all bills be limited to a single subject.

The judge said nothing in her ruling should come as a surprise to lawmakers.

“The Arizona Supreme Court has made it clear that logrolling is unlawful,” she wrote, citing a 2003 ruling in a fight between the legislature and then-Gov. Janet Napolitano. And as recently as 2018, Cooper said, the justices ruled the whole purpose of a single subject rule is to prevent lawmakers from “combining different measures into one bill so that a legislature must approve a disfavored proposition to secure passage of a favored proposition.”

In finding the method of enactment unconstitutional, Cooper said she does not need to rule on a separate argument that the ban on mask mandates at traditional public and charter schools violates constitutional requirements for equal protection because it does not apply to private and parochial schools.