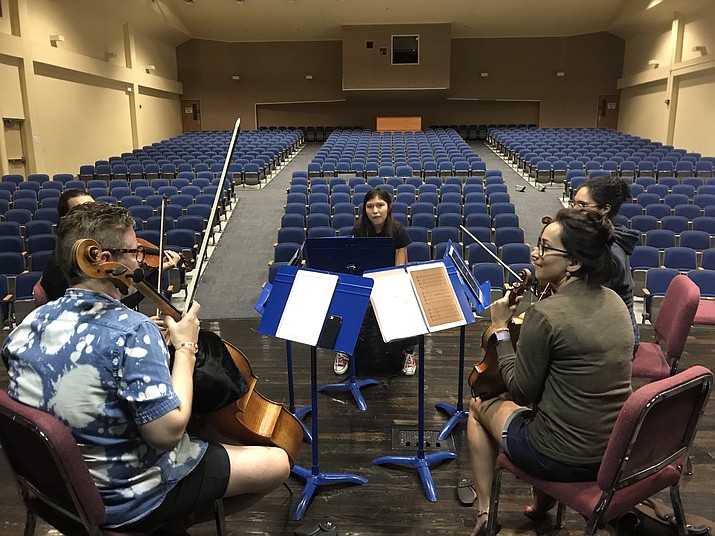 Arika Morningstar during a workshop with the Catalyst Quartet during NACAP 2019. (Submitted photo)

POLACCA, Ariz. — Hopi High’s music program is making a comeback now that students have returned to in-person learning. The program was on hold during the COVID-19 pandemic.

Hopi High music teacher Tom Irwin said they are trying to restart the program because a lot of his best students were lost to graduation, even before the pandemic hit.

“After being out for 18 months and before that losing a bunch of seniors, it’s like we’re starting over,” he said.

The good news, Irwin said, is enrollment at Hopi Jr/Sr High School increased, so he has more students in his program this year.

The program now has 85 music students, which is more than double than what it had two years ago, prior to the pandemic.

Irwin said the other good news is that the program received a sizable grant — so now the program has a lot of new instruments, including a piano lab, guitars and a music production lab with computers where students can compose music online. The progam is also planning on producing audio and video podcasts in a music production class.

“They are learning to put music tracks together,” Irwin said.

The Grand Canyon Music Festival, which brings music to Hopi Jr/Sr High School each year, had a video outreach program during the pandemic.

“A couple of our seniors composed beautiful pieces through them for Boston area schools,” Irwin said.

The pieces were performed by the classical quartet Catalyst. Sierrra Ramirez and Erica Morningstar had their compositions played by a quartet in the Boston schools.

The Hopi High music students work drew notice after Christine Shupla was hired by a video game company to produce music for their video games.

Shupla is studying music at a junior college in Phoenix.

Irwin said he is happily surprised that enrollment increased.

“I don’t know why enrollment increased. Maybe they were afraid of the city because of the pandemic,” he said.

Teaching continues to be a challenge because of COVID-19. Students and teachers have to wear masks. Those playing horn instruments have to take their masks down when they play. Irwin said he has a hard time because sometimes students cannot hear him when he’s speaking with his mask on, even when he uses a microphone.

The teachers at Hopi High, including Irwin, have a box device around their neck that they say is supposed to help kill the virus.

“You hardly notice it once it’s on,” he said.

Irwin hopes the young music students will be ready to perform at the school’s annual coffee house in December.

“We’re scrambling to get to the level where they can do it,” he said. “We have a lot of talent with our beginning guitar, piano and percussion students. The main thing is to get us up and running again. I hope we don’t have to leave school again because of covid. There’s that possibility because of all the different variants.”

Irwin said by spring the Hopi High program should have emerging musicians and a strong drumline.

“I’m hoping to get the drumline into Flagstaff and Phoenix competitions,” he said.

Irwin said parents are happy to see the music program back and he's inquired about the return of the coffee shop performances.

“The new students don’t know what the music program is, but the students who are returning are excited to be back,” he said.

Irwin said in order for music students to be successful they need to practice.

“It’s just like anything else where you need to set goals and work toward them,” he said. “Hopefully, they end up with a product they can be proud of.”