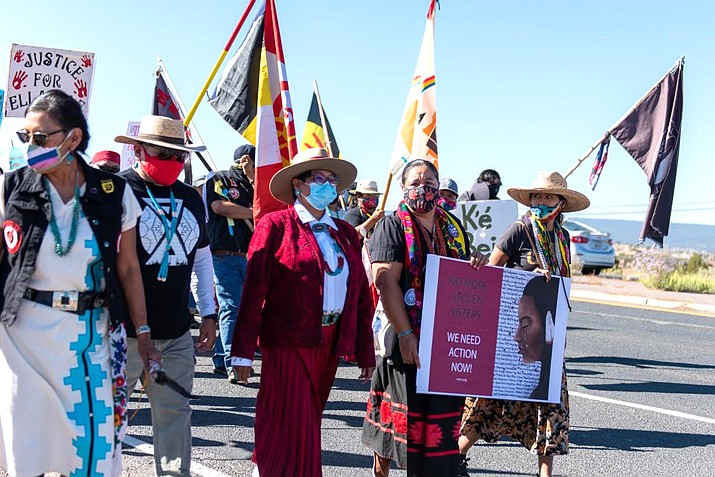 “This is an action we’re taking,to ask Navajo Nation leadership and the government to reflect the needs of its people, so no more promises, just pure action,” said Delegate Amber Kanazbah Crotty (Cove, Toadlena/Two Grey Hills, Red Valley, Tsé’ałnáoozt’i’í, Sheepsprings, Beclabito, Gad’ii’áhí/Tó Kǫ’í). “Fund our public safety, police department, and the investigators. We need advocates to help families and survivors with their healing journey, and for them to be provided wrap-around services.”

During the budget meeting, Council Delegate Eugenia Charles-Newton (Shiprock) shared her own sexual assault experience on the chamber floor, in pleading for support of re-allocation of funding for the Prosecutors Office. Emotions of support stirred amongst online listeners, resulting in a public outcry over the amendment vote and the lack of funding for resources for marginalized communities on the Navajo Nation.

“The position originally proposed during the budget session for an administrator to track cases, is needed for the entire Navajo Nation because it is important for victims, it is important for healing, it is important for family, and it is important for the home,” Charles-Newton said. “If this position in the Prosecutors Office can be funded for more than 30 years, and if it can grow by starting off with one [position] in each agency — it will help our people to heal. More importantly, this position can give victims hope that their case will see some justice, and that somebody is fighting for them. Sometimes when we are in a situation, where we find ourselves to be victims, the strongest person still needs somebody to fight for them.”

Over the past week, supporters of Charles-Newton and Crotty organized with the Diné Sáanii for Justice movement on Facebook to coordinate a peaceful march from the Navajo Nation Museum to the Navajo Nation Council Chambers. The march was organized to uplift the voices of Navajo women and to address the concerns of community leaders, elders, and local activists.

“We came together soon after we heard from Honorable Delegate Charles-Newton on the council floor [last week]. We were all moved by what she has gone through, because we all have our personal experiences with violence in our lives,” said Kristine Laughter, an organizer for the Diné Sáanii for Justice march. “We all knew we couldn’t sit back, so we needed to organize to do something that would benefit the victims of violence, which would bring forth people like we have today.”

“We’re all dealing with our trauma. The time of shame and blame is over, this is a time to create a safe space for people to heal and we’re all part of that healing process, so that is why we are walking today,” Crotty said.

Damon thanked leaders and communities from across the Navajo Nation for bringing their concerns to the chamber.

“Our women have led the charge against injustices towards our people and they continue to fight for equality for all people across the globe,” Damon said. “As elected leaders, we hear the constant struggles the Navajo people fight every day and we continue to work together to ensure our Navajo Nation sovereignty is upheld. I am here as the Speaker of the 24th Navajo Nation Council, along with my colleagues, to listen and learn from you and take everything into consideration.”