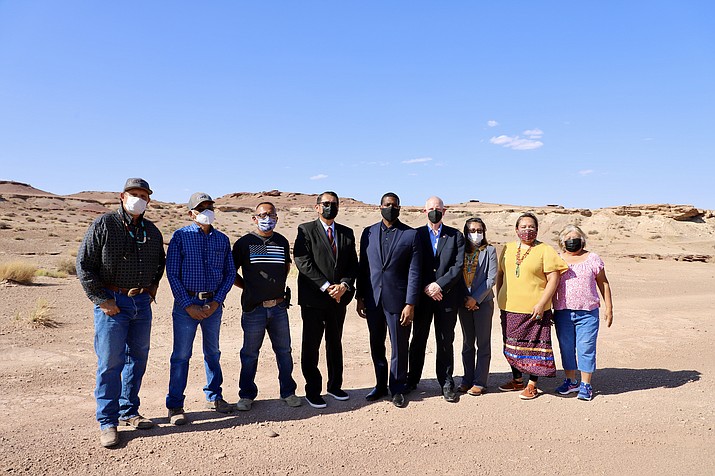 Approximately 30 million tons of uranium ore were extracted from Navajo lands during mining operations from 1944 to 1986 to support America’s nuclear activities such as the U.S. military’s Manhattan Project, World War II and the Cold War.

There are approximately 524 abandoned uranium mine sites on the Navajo Nation, and the Navajo Nation EPA estimates that there could be far more. Only 219 of these sites have available funds for clean-up and remediation efforts, leaving a total of 305 unaddressed sites that pose severe environmental and health hazards to surrounding areas and people.

“The Navajo people have endured decades of radiation exposure and contamination caused by uranium mining and production, and continues to impact the health of individuals, families, and communities,” Nez said. “Our administration has met with the U.S. EPA on numerous occasions to ensure progress with uranium mine clean-up efforts. We have over 500 abandoned uranium mine sites, and the U.S. EPA is making progress in addressing these sites, but we have not seen any clean-up activity for over two years.”

Nez said he is confident, with the leadership of President Joe Biden and Vice President Kamala Harris, and said the administration and the Navajo Nation can work together to make more progress and ensure the safety and well-being of the Navajo people.

During the meeting, Nez, O’Halleran, EPA Administrator Michael S. Regan, and impacted community members visited an abandoned mine near the Cameron Chapter House. The mine site is approximately 31.5 acres and within one mile of 50 Navajo homes, and located three miles from the Little Colorado River.

“I lived near the mine all my life. I have been experiencing health issues since the 1970s. We did not know of the abandoned mines during our childhood, and we would play on the rocks and water puddles on the mine site,” said Mamie Beard and Evelyn Curry, Navajo elders who live within a mile of the mine. “Recently, they finally posted hazard signs to avoid the area. Many of our family members have passed from cancer and chronic related illnesses. We want a safe area for our children, grandchildren, and livestock.”

EPA Executive Director Valinda Shirley highlighted the need for immediate remediation, proper consultation and increased funding for resources. There is approximately $1.7 billion in funding to clean up 219 mine sites; however, it is not enough to address the remaining 305 sites, which does not include the cost of long-term monitoring and maintenance.

“The Nez-Lizer Administration continues to advocate for Navajo families who continue to experience long-term health impacts due to radioactive contamination and exposure from abandoned uranium mines. We have to hold the federal government accountable and uphold the Diné Natural Resources Protection Act. We will continue to advocate this position for the health and wellness of our Navajo people,” Nez said.

During the visit, Regan said the priorities of the EPA include intergovernmental relations, which included the need to strengthen consultation with tribes, protect human health and re-establish tribal partnerships.