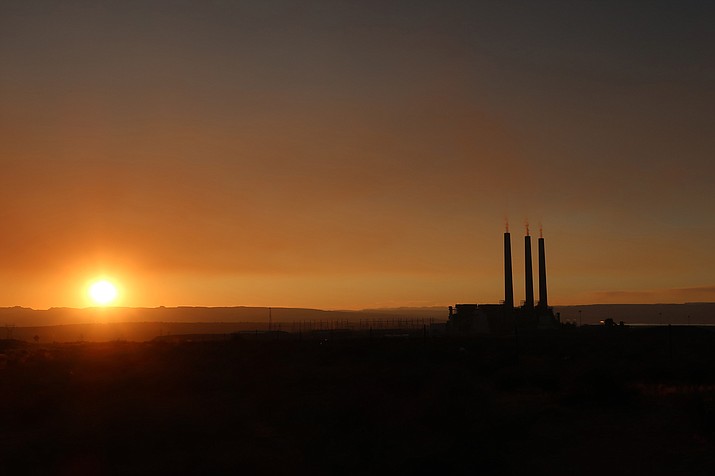 With the closure of the Navajo Generating Station in 2019, the Navajo and Hopi tribes have sought options for restoring lost revenue and jobs on the reservations. (AP Photo/Felicia Fonseca)

WASHINGTON — With the closure of the coal powered Navajo Generating Station in 2019, the Navajo Nation and Hopi tribe began seeking options in alternative energy to replace lost revenue and jobs on the reservations.

On Sept. 14, Navajo Nation President Jonathan Nez and Hopi Chairman Tim Nuvangyaoma were among key speakers during a zoom conference with the Interagency Working Group on Coal and Power Plant Communities and Economic Revitalization (IWG).

The virtual event was specifically tailored to support the economies of the Navajo Nation and Hopi Tribe’s energy communities and to open a meaningful dialogue on potential development projects. It had a strong focus on how to apply for federal funding, like the EDA’s Coal Communities Commitment.

The session also focused on $300 million in federal funding recently announced as part of the EDA’s Coal Communities Commitment.

Alternative energy options include, but are not limited to solar power, which has already been established on the Navajo Nation.

Aside from renewable energy, Nez the Navajo Nation also needs funding for boosting communities and tourism.

“We didn’t have much choice with the closure of the mine,” Nez said. “We want to heal the land, but we also want to provide energy for Native people.”

To do this, Nez said it will require moving away from fossil fuels and toward renewable energy.

Nuvangyaoma said the Hopi tribe faces unique challenges and could use funding for revitalizing its economy.

“We are on the front line of the energy battle. As President Nez said, we did not have much of a choice,” he said.

Brian Anderson, Ph.D. executive director of the IWG, said in a news release that it was wonderful to meet with Nuvangyaoma and Nez to discuss how the IWG can support tribal communities.

“The IWG is looking forward to working more closely with the Navajo Nation and Hopi Tribe, and other tribes across the country, to support their hard-working energy workers and communities as the country undergoes the largest energy transition in a century,” he said.

Among those present at the meeting were representatives from the U.S. Economic Development Administration (EDA), U.S. Department of Energy, U.S. Department of Interior, U.S. Bureau of Indian Affairs, U.S. Office of Surface Mining Reclamation and Enforcement, U.S. Bureau of Land Management and National Telecommunications and Information Administration.

Wahleah Johns from the U.S. Department of Energy’s Office of Indian Energy said the DOE is committed to energy and equity and revitalizing communities.

Johns, who lives about two miles from the former coal operation, said this is a milestone for those impacted by the closure.

“I’ve seen the lost jobs and environmental impact,” she said.

During the presentation, federal officials informed the tribes about funds that are available for their communities. These funds are accessible through an application process and are distributed to various agencies depending on their proposals. The IWG and representatives of various agencies said they are available to help tribes navigate this financial maze process.

According to Nez, when Peabody Energy closed the Navajo Generating Station the Navajo and Hopi tribes lost close to a thousand jobs that brought in $128 million annually with the average salary at $99,100.

Nez said the Navajo Nation’s number one resource is its work force.

“We have strong dedicated people,” he said.

Currently, alternative energy projects are underway in Cameron, Arizona and in New Mexico and according to Nez, the Nation has 27,000 square miles of land and $300 million available for renewable energy projects.

Brian Urban, host of the zoom conference, said IWG needs to know the vision of each community, but added that the labor force is a high priority.

The Hopi Tribe is a smaller reservation, with 2,500 square miles spread over 12 villages, according to Nuvangyaoma, who said the one valuable resource on Hopi is coal.

He recounted how coal was mined at the Kayenta Coal Mine and said it supplied cheap electricity until it was closed in 2016 when natural gas became much cheaper.

According to Nuvangyaoma, the Trump administration promised access to transmission lines for energy and equal treatment, but both of these promises were broken.

“We need economic assistance with the transmission lines,” he said.

Nuvangyaoma stated that the Hopi reservation is the only reservation in America that is landlocked by another reservation – as it is surrounded by the Navajo Nation.

He said the Navajo Tribe has demanded funding for its right of ways.

“The federal government could assist by connecting us to transmission lines,” he said. “We need assistance for technical work and marketing energy. We can build reliant energy for Hopi and build our economics.”

U.S. Rep. Tom O’Halleran, who represents both tribes in Congressional District One, said the Navajo Generating Station was a powerhouse that left too many people without options when it was closed.

He said he is working on several bills that could help bring funding to the Navajo, Hopi and other reservations as well as nearby communities such as Page.

“This is critical for the survival of families and the needs of the Navajo and Hopi tribes,” he said.

According to Johns, this is the first step in the process and work groups will follow up by sending announcements and posting information to their website.