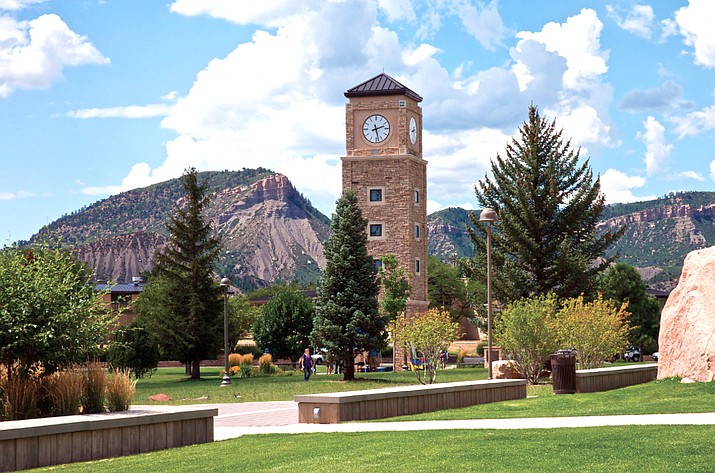 The purpose of the ceremony was to focus on healing and acknowledging the trauma caused by boarding schools.During the event, students, staff and Indigenous leaders came together as a community to educate others who were learning about boarding schools for the first time and provided blessings for the FLC community.

Classes were cancelled for students to attend the ceremony.

“Everyone came together on a difficult topic, but the singers, dancers and ceremony provided comfort for people in that moment,” said Tom Stritikus, president of FLC.

About 40 percent of Fort Lewis College’s population are Indigenous students and Stritikus said he believes it is important to provide a sense of community, wellbeing and belonging for all students.

Stritikus has been working at FLC for four years and during his first year, he noticed the clocktower panels and was able to meet with professors and the FLC History Committee to discuss the issue.

“I was told that there needs to be a process and greater depth to remove the panels,” he said.

Fort Lewis is working with the Center of Southwest Studies and its students to create an exhibit for the removed panels. However, FLC is unsure about what will replace the panels and is requesting student input.

During the ceremony, Denica Tafoya, Hozhoni Ambassador and Destiny Morgan, First Attendant, acknowledged the land, a blessing was made by Linda K, Baker, Southern Ute Tribal Council Member and the Honor Songs were led by Skyhawk Nation. Tribal Leaders, Melvin J. Baker, Chairman of the Southern Ute Indian Tribe and Adam J. Begaye, Navajo Nation Vice President, were guest speakers of the ceremony. Irene Bitsoi, a Navajo Elder who was a boarding school survivor, shared her story and provided a prayer.

“As an institution, we believe that we create a sense of wellbeing and belonging for our students to stay here and succeed academically and throughout their careers,” Stritikus said.