Race for Hopi chairman to be rematch of 2017 election 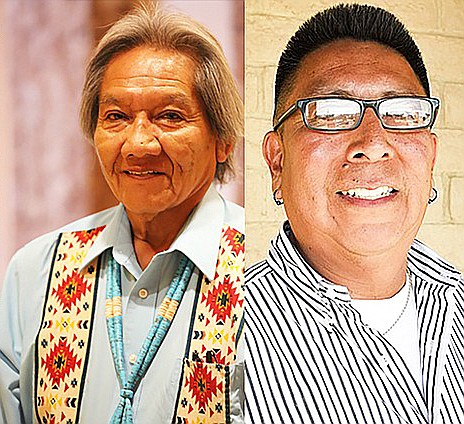 FLAGSTAFF, Ariz. (AP) — The race for Hopi chairman will be a rematch of the last general election.

Tribal council member David Norton Talayumptewa was the top vote-getter in the Sept. 9 primary with 298 votes, followed by current Chairman Tim Nuvangyaoma with 291 votes, according to unofficial results.

Turnout for the primary was low with 945 votes cast. The ballot didn’t feature the candidates for vice chairman because only two people are running, meaning both current Vice Chairman Clark Tenakhongva and Craig Andrews automatically move on to the general election.

Andrew Qumyintewa finished a close third in the primary election for chairman, with 286 votes. Former Vice Chairman Alfred Lomahquahu Jr. trailed with 70 votes. The candidates have a few days to submit any challenges before the results can be certified, said tribal registrar Karen Shupla.

The tribe’s top two elected officials don’t run on a ticket, but Nuvangyaoma has been campaigning with Andrews.

The leaders get much of their authority from the Hopi Tribal Council, which functions like a city government. The chairman presides over meetings but doesn’t vote except to break a tie.

Talayumptewa, a former U.S. Bureau of Education official, represents Kykotsmovi on the council where he championed a measure to unify the several schools on the reservation under a single district and education board.

“There’s going to be some consistency to how we’re teaching them, and it’s going to improve learning and academic success,” he told the AP.

Nuvangyaoma counts securing funding for a water project to address arsenic contamination and a detention facility, along with progress on a solar farm, a hotel and leasing a manufacturing facility owned by the tribe among the successes of his administration. He acknowledged the path hasn’t been smooth.

“We’ve learned that with hard work and commitment, we can overcome these obstacles,” he said in an interview.

Both Talayumptewa and Nuvangyaoma have talked in a recent forum and on social media where much of their campaigning has happened about the need for economic development and finding ways to encourage younger Hopis to become involved in the tribal government.

One hurdle in running for elected office is a requirement for candidates to speak the Hopi language and demonstrate that ability, Nuvangyaoma said. Before 2017, candidates had to be fluent.

“I’m not ever going to discredit our language,” he said. “But I think there are constitutional amendments and changes that need to happen in order to bring (in) our professionals that speak education, technology, health care, development, finance, all these languages, technical languages to move Hopi forward.”

The tribe’s constitution first was approved in the 1930s. Changes require an election overseen by the U.S. Department of the Interior.

Talayumptewa said he wants to maintain the language requirement, establish a language immersion school on the Hopi reservation in northeastern Arizona and actively reach out to young Hopi professionals to help run the government.

“That is what sets us apart as a Hopi Nation, that’s how we practice our traditions, our culture and our religion,” he said. “I think there are ways to teach the Hopi language to maintain it.”