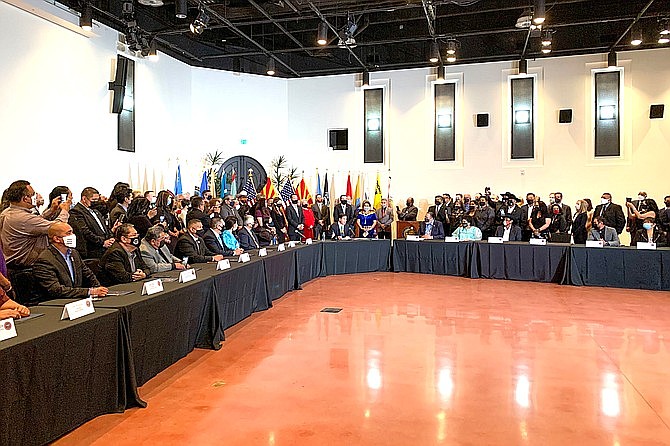 Tribal leaders and members were present for the signing of House Bill 2772 and the amended Tribal-State Gaming Compact by Gov. Doug Ducey. (Photo/Alina Nelson, Cronkite News)

PHOENIX (AP) — A judge on Sept. 6 refused to block a new Arizona law allowing sports gambling to be run by professional sports teams in a decision that will allow the major gambling expansion start as planned later this week.

The Yavapai-Prescott Indian Tribe wanted the law, which allows professional sports teams to get licenses to run sports gambling, declared unconstitutional. They argued it violates the state's Voter Protection Act by illegally amending the 2002 voter initiative that authorized tribal gambling in Arizona by allowing nontribal groups to have gambling operations without asking voters to weigh in. Proposition 202 restricted gambling outside tribal reservations.

But Smith wrote that Proposition 202 regulated the types of gambling allowed at tribal casinos, not other kinds of betting.

"Plaintiff did not cite language from the proposition indicating that Arizona would never expand gambling to different activities or locations," Smith wrote. "What is more, the proposition contemplated gambling expansions."

The judge also rejected several other arguments the tribe made in seeking to have the sports betting law declared unconstitutional.

"Today's ruling is not just a win in court, but a win for Arizona," said C.J. Karamargin, spokesman for Gov. Doug Ducey, who signed House Bill 2772 into law in April. "A tremendous amount of work by a diverse group of stakeholders has gone in to implementing HB2772 and the amended tribal-state gaming compacts. This ruling means that work will be allowed to continue."

The tribe also argued the law passed by the Legislature and signed by the Republican governor is unfair because it allows 10 licenses for professional teams to run sports betting at or near their stadiums and online, while allocated only 10 for tribes to run online sports betting operations. All tribes with casinos can run sports books.

That shortchanged tribes because there are only nine qualifying teams or events such as professional golf tournaments while there are more than twice that number of tribes competing for licenses, and all must pay a nonrefundable $100,000 application fee.

Smith's ruling said that may be worth exploring as the lawsuit proceeds, but is far below what is needed to issue an injunction.

Attorneys for the state said the tribe's interpretation of the law is wrong and it also waited too long to seek a restraining order preventing sports betting from starting.

Smith agreed the tribe's delay in filing the lawsuit weighed against it, noting that the legislation was signed in April, as were updated tribal gaming compacts that most of Arizona's 22 tribes signed.

And he rejected the tribe's "speculative" argument that allowing sports gambling outside of tribal casinos will harm the tribe's revenue. Those factors helped push the balance of hardships that judges weigh at the preliminary injunction stage of a suit far into the state's favor, he wrote.

The tribe contends that allowing off-reservation sports betting will siphon off gamblers that would normally go to their two casinos in Prescott, about 100 miles north of Phoenix, by removing tribes' exclusive rights to run gambling operations. But it mainly argued that its inability to get an online sport gambling license could decrease its future revenue.

The professional teams, including all of the major sports franchises, NASCAR and PGA events that were issued state licenses are all based in metro Phoenix. They will run brick-and-mortar sports betting operations at or close to their stadiums or related venues, but also can take bets online.

In concert with the new law, Ducey and the vast majority of Arizona's 22 tribes — but not the Yavapai-Prescott tribe — signed new tribal gaming compacts that greatly expand tribes' exclusive gambling offerings. Tribal casinos can now offer games such as Baccarat and craps to their existing offerings of slot machines, blackjack and poker. Ten tribes were awarded sports gambling licenses that allow them to run sports books online.

The new compacts were the result of five years' negotiations between the governor's office and tribal leaders across the state.