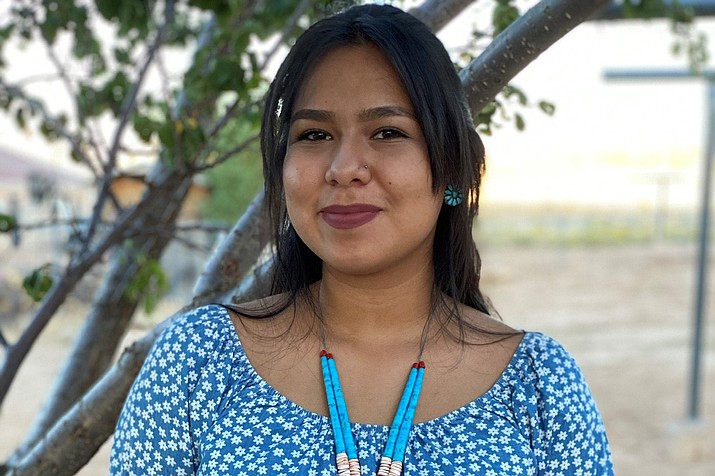 The intent of the scholarships is to provide quality journalism that strengthens communities. The scholarships are awarded to Indigenous students who are pursuing careers in media.

Labahe, who is Navajo, is a junior at Ft. Lewis College in Colorado.

“I felt so happy I was crying,” Labahe said about learning she won the scholarship. “The night before we were praying. I was feeling so overwhelmed and the next morning I saw the scholarship announcement on Facebook live. I was the third person they called and I said ‘Oh my gosh, that’s my name.’”

Labahe announcement the news to her partner Frank Espinoza, relaying her excitement.

she was so excited about getting the scholarship.

To apply for this NAJA scholarship, Labahe had to be a member of NAJA and submit articles she had written.

Labahe will use the $10,000 to pay for rent, food and other college costs.

Labahe, who won state and national awards while at Hopi High, said her accomplishments make her want to go forward with a career in journalism. She said she would eventually like to have a workshop for native youth about journalism and the Navajo language. She plans to continue to focus on video and print.

“I want to cover stories about contemporary issues about tribes across the country,” she said. “I like to do stories about native art.”

“A lot of people like my writing even when I don’t think it’s that good, and that makes me happy,” she said.

She would like to improve her photography and videography skills.

“That’s why I’m doing a documentary for one of my classes,” she said.

Labahe is willing to serve as a mentor for younger journalism students. She can be emailed at aboolynn15@gmail.com

Labahe said this scholarship is important because native voices are not recognized throughout the country.

“There are so many issues that are not being talked about. We need to do more presentations in media. This scholarship is one way of supporting that,” she said.

Labahe said one reason she applied for the scholarship was to make her late father, Dewayne Labahe, proud.

“My dad was my biggest supporter and motivator,” she said.