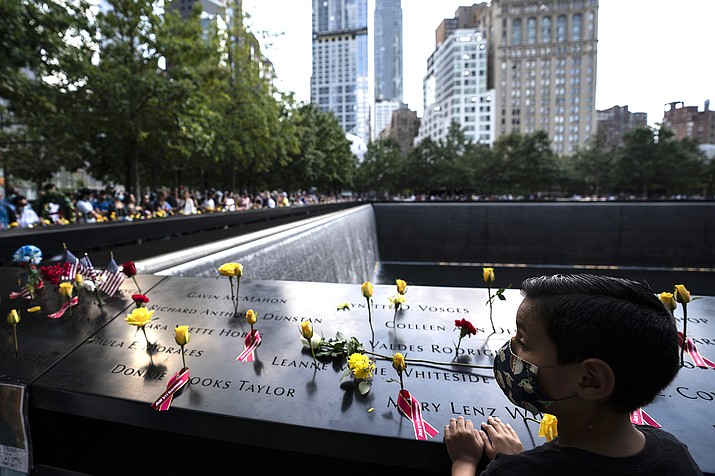 Members of the public arrive to the south pool after the conclusion of ceremonies to commemorate the 20th anniversary of the Sept. 11 terrorist attacks, Saturday, Sept. 11, 2021, at the National September 11 Memorial & Museum in New York. (AP Photo/John Minchillo)

PHOENIX (AP) — Arizona Gov. Doug Ducey is planning to push legislation that will require that students be taught about the 9/11 attacks that killed nearly 3,000 people.

Ducey announced the plan Sept. 10, a day before the 20th anniversary of the attacks on the World Trade Center in New York and the Pentagon using hijacked jetliners. A fourth commercial jet with terrorists in control was headed toward Washington D.C. before passengers stormed the cockpit. The plane crashed into a Pennsylvania farm field, killing all on board.

Ducey said “Sept. 11, 2001 was a day that changed America,” shaped a generation and altered how Americans see the world and how the world sees America.

“But as indelible as the memory of that tragic day is for many of us, the passage of time has taken an inevitable toll,” the Republican governor said in a statement. “We are now at a point where Arizonans of a certain age have no direct recollection of the pain and anger we felt two decades ago when terrorists attacked our country, or the resolve and courage demonstrated in the days that followed.”

Ducey said he would work with the state Board of Education and lawmakers to craft the new requirement.

Currently, only 14 states require that the events of Sept. 11 be taught in K-12 schools.

Ducey has pushed similar requirements. In 2015, he pushed legislation that required that students take a civics education course and pass the U.S. citizenship test as a high school graduation requirement.

This year, he signed a bill requiring education on the Holocaust and other genocides.