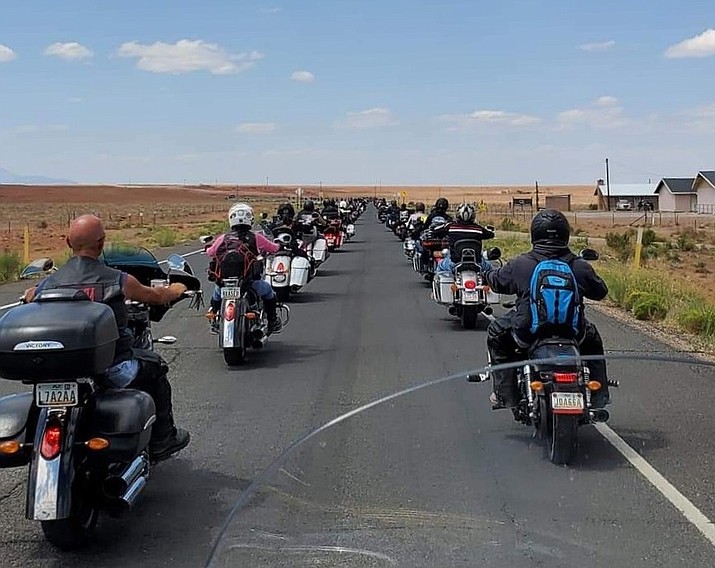 Due to COVID-19 restrictions on the Navajo Nation, the board members of NHHR decided to consolidate the four-day event to be a one-day ride from Window Rock to Flagstaff. The riders typically meet with Gold Star families across Navajo and Hopi communities. This year, the ride concluded with an outdoor gathering to remember all the fallen heroes by saying their names and a moment of silence. 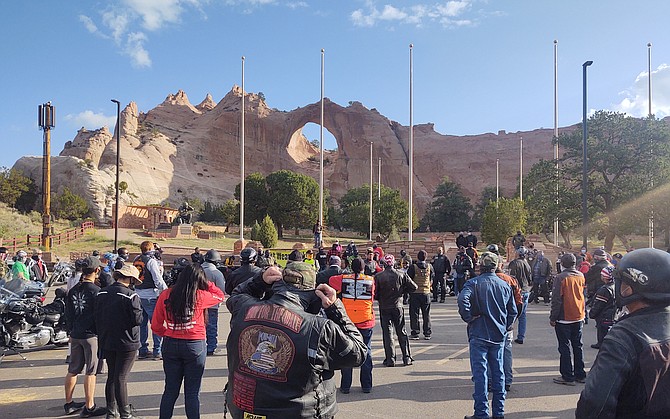 “Every year, I see the turnout of riders. It humbles my heart to know they travel many miles to ride for Lori and all our fallen warriors, and that they will never be forgotten,” said NHHR President Bobby Martin, as he welcomed all the riders from across the United States and the variety of military organizations; such as Nation of Patriots, American Legion Riders, Combat Veterans Motorcycle Association, Flags of Honor Escorts, Run for the Wall and Wind & Fire MC.

This year, Dan and Becki Smith from Nation of Patriots were selected to lead the honor run. Dan is the regional commander for NOP Arizona and a U.S. Air Force Vietnam veteran.

“When Becki and I were chosen to be the lead riders for the 2021 Lori Piestewa Honor Ride, I was absolutely awestruck by the honor we were given. We are all in this together, with common goals, and all that we do is to help the veterans, men and women who have served this country so honorably,” Dan said. 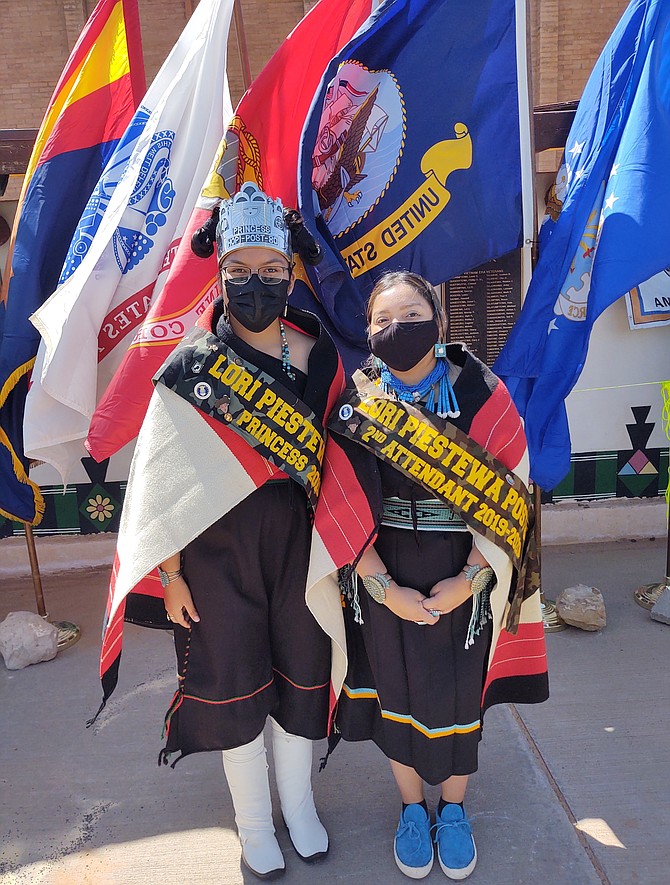 The brisk morning began with the sound of motorcycles rolling into the capital of the Navajo Nation, comprised of veterans, civilians, men and women of all ages. Some riders attended for the first time while others have been riding annually. Not everyone rode a motorcycle, many volunteers arrived in vehicles to help set up registration, be a part of the chase crew and to help with merchandise sales.

“As an American Legion Rider, a program within the American Legion. It follows under our four pillars; supporting veterans, their family, children and youth and promoting patriotism and Americanism amongst the community,” said U.S. Infantryman Alfredo Gomez, from Belen, New Mexico. “So it is such an honor to represent and promote the American Legion with an event like this with the same intentions, and they do a great job.”

Gomez is the guardian of the ‘For the Fallen Flag,’ which has traveled across the country three times supporting events and visiting various memorials such as the Vietnam Wall in Washington D.C., the Pentagon, Twin Towers Memorial in New York City, Flight 93 Memorial in Pennsylvania and the Middle East Conflicts Wall in Marseilles, Illinois.

On Aug. 21, the Navajo Hopi honor flag was escorted by Army SPC Joseph Hudson to the residence of Gold Star Mother Percy Piestewa, and later was transferred to Army veteran Ted Martello.

“It’s always an honor to ride with NHHR and I am honored to be part of the NHHR family,” Martello said.

“As a family, we feel that Lori’s purpose was to bring people together in peace and unity,” said Percy Piestewa, as she welcomed the honor riders to her home in Flagstaff. “As the years have gone by, we have met so many wonderful people. We have been so blessed by the friendships, by the support. I thank each and every one of you.”

Brandon Whiterock, who was only four years old when he lost his mother, Lori, is now a young adult at 22. He thanked all the riders for traveling far and riding through different elements. He expressed his appreciation for the bikers and for their dedication to honor.

“You are all here for a purpose, the weather conditions you ride through, countless miles and hours of riding, I just want to thank you for coming out and remembering all the Gold Star families and fallen heroes,” Whiterock said.

The group is working on the upcoming Gold Star Family Day, which will be on the last Sunday of September. Also follow the Navajo Hopi Honor Flag, through FOHE as it is currently on mission in New Mexico and Colorado.

More information about the Honor Riders is available at www.NavajoHopiHonorRiders.com.