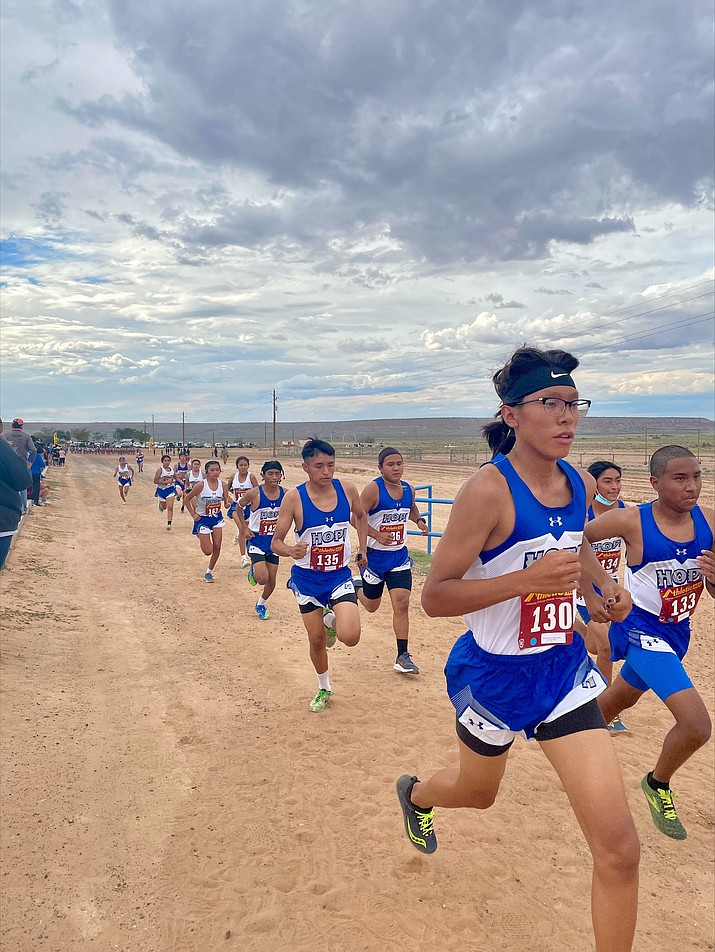 Greer said the Hopi High Invite Aug. 31 went extremely well, but was rough on some of the runners because they hadn’t run competitively in awhile.

The Hopi High boys and girls cross country teams are coached by Rick, who was recently inducted into the National High School Hall of Fame.

The Hopi High boys cross country team had the best showing of all the Hopi teams as they placed second out of 10 teams.

The Hopi High girls cross country took third out of 12 teams. The Page High School won the boys race while the Coconino High School girls from Flagstaff claimed the championship in their race.

“It started off warm, but clouds rolled in to cool us off,” Greer said. “There was a smaller turnout than past year, but there was a good turnout.”

Protocols were followed as everybody wore masks except for the runners when they were running.

“Everybody was great. There were no complaints,” Greer said.

Since the Hopi High Invite was outside, there was no limit on the amount of people attending.

“People were not congregating in groups and since it’s cross country the people were spread out over the course anyway,” Greer said.

Hand sanitizer was in many places, people were encouraged not to share food or drinks outside of their groups and teammates were told not to share as well.

Eva Bahnimptewa is in charge of the volleyball program with the school board anticipating hiring a head coach this coming week.

“Eva is our MVP and former head coach. She loves the girls and the sport. There are 37 girls out for volleyball. That’s the most I’ve seen in my seven years here and that has a lot to do with Eva because she really enjoys the sport. It’s great to see the program grow,” Greer said.

Raleigh Namoki has returned as head coach of the Bruin football team.

“Last year was such a grind. It was tough on every aspect of our lives and not having sports was a big missing component on students and the community,” he said.

Greer said Hopi High staff and the Northeastern High Schools’ athletic directors last year were continually planning with hopes of sports returning each month but as the pandemic continued that did not happen. He said at times it felt like sports were never going to return, but he emphasized that since vaccinations are up the surge is down on the Hopi Reservation.

Greer said the coaches are excited to return because they miss the players and the competition.

“The coaches are doing a great job with mitigation. They have to wear masks. It’s different; it’s not normal,” he said.

Greer said thank you to the high vaccination rate on Hopi, which he attributes to the return of sports this year.

“The players are super excited to have the opportunity to be back out there in the family atmosphere,” he said.

Greer said there is some nervousness within the community because people are still uncertain of the COVID-19 impacts.

Greer said Hopi High had one positive case the first week of school, but hasn’t had any other positive cases.

“There is no way that we would be where we are without the help of the community and the openness to the vaccination,” he said. “So much of those getting COVID athroughout the country are not vaccinated. I cannot thank the community enough for the high vaccination rate because it allows our school and athletic programs to go on.”

Edith Silas was the top runner for Hopi placing 16th followed by teammate Tuvasi Shelton in 17th. Hopi had two other runners in the top 25 with Nanaba Nuvayokva taking 23rd and Brianna Lomintewa finishing 24th.