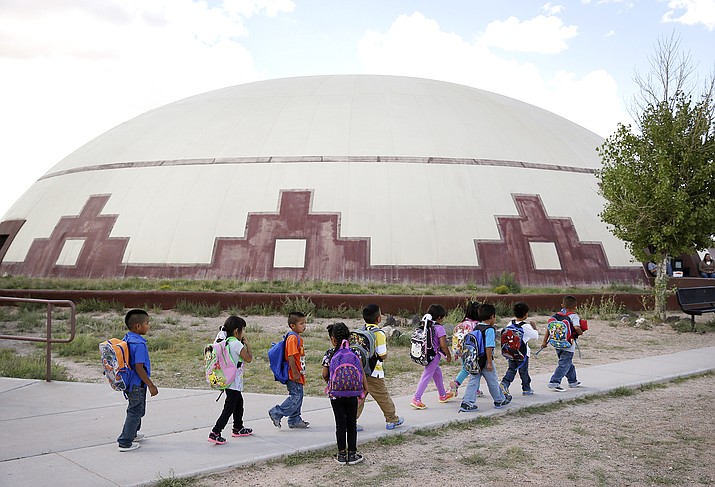 In this Sept. 25, 2014 photo, students walk between buildings at the Little Singer Community School in Birdsprings, Arizons on the Navajo Nation. (AP Photo/John Locher)

The mandate covers more than 2,800 faculty and staff at 53 schools and dormitories operated directly by the U.S. Bureau of Education in states including Arizona, New Mexico and the Dakotas.

More than 180 schools operate under the agency's umbrella, but about two-thirds are run by tribes under contract with the federal government or through grants, including most on the Hopi reservation and neighboring Navajo Nation.

Hopi Vice Chairman Clark Tenakhongva said school officials can decide on their own whether to require vaccines.

The Bureau of Indian Education, which is part of the Interior Department, joins a growing number of government agencies that are requiring vaccinations or regular COVID-19 testing.

Navajo Nation President Jonathan Nez issued an executive order that requires all tribal employees under his watch to be fully vaccinated by Sept. 29 or regularly test negative for the coronavirus. Tribal spokesman Jared Touchin said that extends to employees of the Department of Diné Education.

Nez hasn't acted on legislation recently passed by the Navajo Nation Council to mandate vaccines for all tribal employees. The tribe has maintained a mask mandate throughout the pandemic.

Interior Secretary Deb Haaland said bureau employees must be vaccinated no later than Oct. 15 and provide proof. Those who don't comply could be fired or lose their contract, the Interior Department said.

"The department recognizes that education plays a critical role in promoting equity in learning and health, particularly for Indigenous communities that have been disproportionately affected by COVID-19," the department said.

The schools will consider individual requests for exemptions but could require those who aren't vaccinated to follow safety measures established by the U.S. Centers for Disease Control and Prevention, undergo regular COVID-19 testing and prove they've tested negative before they return in-person to schools or dormitories.

The Bureau of Indian Education schools are operating under a mix of virtual and in-person settings that factor in the circumstances in surrounding communities, and input from tribal and health officials, said Interior Department spokesman Tyler Cherry. He said some schools have had confirmed COVID-19 cases but didn't elaborate.