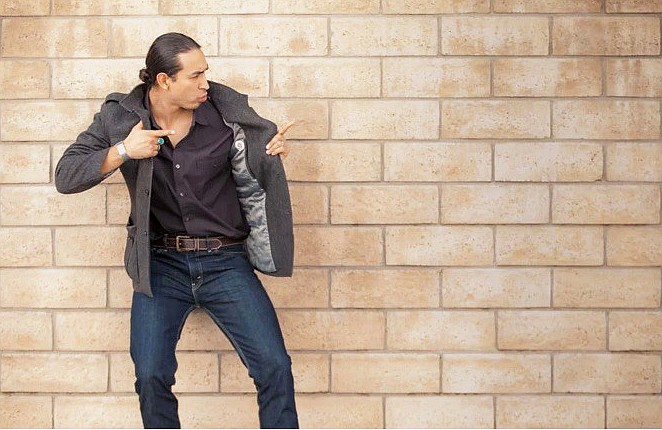 Ask anyone in Indian Country to name their favorite Native comedian and Tatanka Means is likely one of the top names you will hear.

Means is a man of many talents. He’s not only a comedian, but also an actor, stuntman, boxer, entrepreneur, and activist from the Oglala Lakota, Omaha, Yankton Dakota and Diné communities.

Acting in front of the camera (or cameras) is one thing but a one-on-one interview is another challenge for the comedian and public speaker recognized by millions in Indian Country and around the world. Especially when the pandemic threw off his interview game.

“Yeah, I'm so nervous right now. I'm so nervous,” he said on Zoom. “I mean, doing live interviews before the pandemic was one thing. Now I forgot how to talk to people. You know, I haven't had outside contact with anybody. So, yeah. It's a whole ‘nother level. I get on stage, and it goes away.”

His current adventure: “Killers of the Flower Moon.”

Means is about to embark on his first days of shooting on the Martin Scorsese film with heavy hitters Leonardo DiCaprio and Robert De Niro. Additionally, he had just completed a stint as the narrator of the entire novel “Ridgeline” by “The Revenant” author Michael Punke.

In the film, Means portrays John Wren, a Native FBI agent and a go-between of sorts for the non-Native agents in the film.

Though much of the film content is under wraps, the actor gave a bit of insight into his character.

“What I could tell you is that my character is from the book adaptation,” Means said. “John Wren was one of the first Native FBI agents during the formation of the FBI. He was the only Native in the posse of the FBI that goes in to investigate everything.”

Means began shooting the week of June 15 and said he would extend Indian Country’s hellos to DiCaprio and De Niro.

Means also talked about his latest project, which was narrating an entire novel titled “Ridgeline” written by Punke, famously known for “The Revenant.”

“This was my first time ever narrating an entire book," he said. "At first I thought I was going to narrate the Native parts, because there are two stories, the Native aspect and the Calvary story. So I was thinking, ‘yeah, I got that.’ So anyways, it was my first time narrating. It was really hard. I won't do it again. So one and done ... one.”

The book is fascinating, he said.

“It was about the battle of the Hundred-in-the-Hands, where the Cheyenne, Arapaho and Lakota all came together to fight and to team up.”

The battle was also known as the Fetterman Fight during Red Cloud’s War in 1866, Lakota, Cheyenne, and Arapaho warriors battled 81 soldiers under the command of Captain William J. Fetterman. Fetterman and his soldiers were all killed.

Means says the narration turned out exceptionally well. It has a run time of approximately 11 to 12 hours and joked about it being a lullaby for kids.

“So my wife had downloaded it and we were listening to it yesterday while we were driving back from IHS,” he said. “I was listening to it and my son started to fall asleep in the back of the car and I'm like, that's me, I'm that guy now. I'm that guy on a book on tape that's putting kids to sleep.”

The book was released June 1 and is available to stream and download. You can listen to Means narrate a section of “Ridgeline” now on Soundcloud.