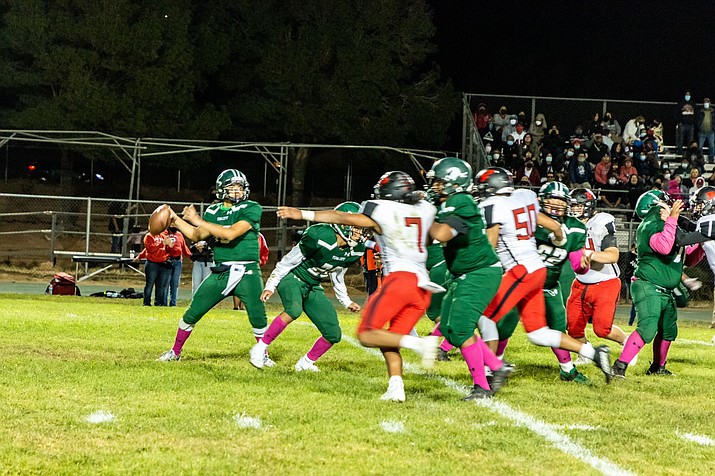 FORT DEFIANCE, Ariz. — The Window Rock Fighting Scouts came away with a 28-22 win over Tuba City in an overtime conference game that saw numerous momentum swings right down to the end.

The 3A North contest was the last game of the season for Window Rock and was its homecoming game. The Scouts ended the season with a 3-6 overall record and 2-2 in 3A North.

“My hat is off to Window Rock. They played a very well-coached game,” Tuba City Head Coach Vincent Lee said. “They made plays when they had to. It was a good game by both teams.”

Tuba City wasted no time setting the tone for the game in the first quarter. In the first series on offense, senior running back Xander Mitchell blew past the left side of the Window Rock defense for a pick up of 60 yards. The Warriors continued to grind things out on the ground with short runs by senior quarterback Papsiya Lomayestewa.

Window Rock had some successful run plays with yardage gained by junior quarterback Taylor Begay. Begay stands 6-foot-3 inches tall and was a terror running and passing the ball for the Warriors.

Lomayestewa made some good runs on quarterback sneaks, and a take-away touchdown by the Tuba City defense from a Window Rock receiver on a pass play put Tuba City up 14-0. That play saw the defensive player rumble 64 yards for the score. The Scouts attempted a few short run plays from Begay to sophomore tailback Jayden Bia, but the Tuba City defense wouldn’t bend.

The Fighting Scouts got on the scoreboard on a long run by Begay. The score was 14-8 on a 2-point conversion on a pass to senior wide receiver Owen Mitchell.

Begay completed some throws to junior receiver Tristan Thomas which moved the ball downfield toward the end of the second quarter. A touchdown on 3rd-and-long by Bia tied the game at 14-14 with 9:15 left on the clock in the third quarter. The Scouts went up 16-14 on a 2-point conversion caught by Bia.

Lee noted that the Warriors were shorthanded due to injuries, saying a few players had to play both ways through an overtime conference game.

Tuba City plays another conference game on the road Oct. 29 at Chinle (0-7, 0-4). Lee said the Warriors are looking at participating in football camps at Northern Arizona University and in Utah when the season ends.