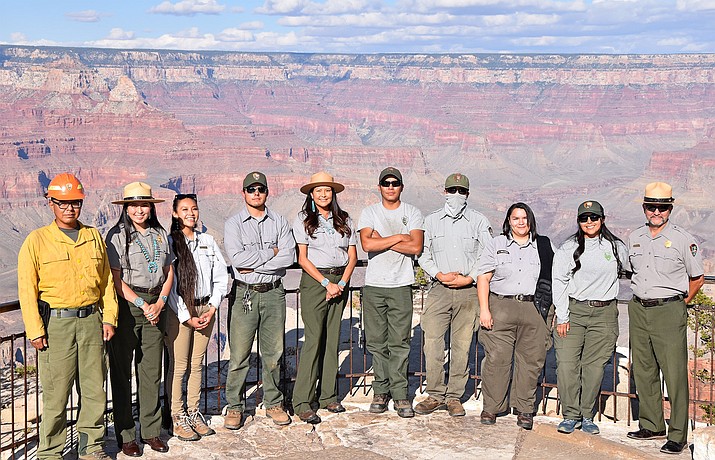 During the meeting, Grand Canyon Superintendent Ed Keable presented a “vision for the future of tribal relationships” for Grand Canyon staff and NPS leadership that focused on three strategies.

The first will focus on increasing tribal presence and management opportunities in the park.

The second strategy will focus on building respect to tribal members regarding management decisions.

“We’ll do this in several ways, including renewing our commitment to allow members of the 11 associated tribes to access the park and permits free of charge; to identify opportunities to eliminate permit requirements or costs to Grand Canyon associated members to engage in religious activities; to continue to identify opportunities to rename places within the Grand Canyon that are either offensive to our associated tribes or otherwise demonstrate respect to them,” Rowe said.

The third strategy will include “treating Grand Canyon employees who are also tribal members with respect” by implementing regular listening sessions with those employees.

“We’ve been doing this for about a year now; we meet quarterly with the tribal members who would like to attend,” Rowe said. “The meeting has grown and we’ve had some great conversations with much information.”

Rowe said that some of the issues discussed are older, “historic” issues, and some are current.

“Talking about these issues firsthand can help to address them appropriately and has allowed us to make a lot of progress,” he said.

Rowe also stated that NPS is initiating cultural awareness training as part of the Grand Canyon training program, which will help connect law enforcement rangers to sensitive issues faced by tribes, such as the proper handling of tribal adornments and religious materials during incident response.

“We’re gaining a better understanding of how we can do things in a way that’s constructive and allows us to meet the intent of state or federal laws but still allows us to recognize there can be cultural differences and how to work our way through those gracefully,” he said.

According to Rowe, the three strategies have been “really useful” and the NPS is currently in the process of drafting the approval of a continuous hiring authority to allow Grand Canyon National Park to hire directly from neighboring (tribal) communities more easily.

Rowe said the continuous hiring authority will allow NPS to expedite the often lengthy process of hiring employees by “cutting through” a lot of the (federal) government’s central hiring processes.

Additionally, Rowe discussed recent collaborative work between the NPS and the Intertribal Buffalo Council, stating that recent efforts to relocate bison from Grand Canyon’s North Rim have resulted in “bison nirvana”, as tribes receiving the bison have sent pictures of the newly-relocated herd enjoying their new homes.

This year, 36 bison were successfully relocated from the North Rim to the Cherokee and Sioux Nations as part of the “Initial Bison Herd Reduction Plan”.

The goal of the plan is to reduce the current herd size to fewer than 200 bison by 2023 in order to lessen the negative environmental impact created by the animals.

Since 2019, 124 bison have been relocated to tribal nations.

The plan also includes a limited culling operation which then distributes meat, hides and other parts to tribes.

“Some of our associated tribes have used these (parts) as cultural artifacts in their ceremonies for hundreds of years, and what they had was becoming very unusable (sic), worn out, and they asked us for some of these things and we were able to deliver them,” Rowe said.