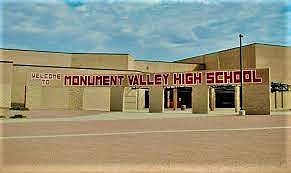 Window Rock came out aggressively in the first few minutes of the first game of the first set. But Monument Valley was able to thwart runs by the Lady Scouts with seniors Shree Yazzie, Aiyanna Nash and the Samoa-born Kayelani Maiava holding the fort up front.

The athletic Nash was particularly dominant, blocking two kills by senior outside hitter Robey Talkalai of the Lady Scouts. Nash left the game near the end of the first game with a leg injury, but Monument Valley head coach Rennell Gilmore preliminarily said the injury looked minor.

The Lady Mustangs went up 9-6 on a tip shot at the net by Maiava, and one got the impression that Monument Valley was finding its offensive and defensive grooves. Another tip shot by Nash, and it was clear that Yazzie, Nash and Maiava were forces to contend with. When Nash left the game, Yazzie stepped up, to the detriment of Window Rock.

Window Rock went up 4-2 in the second game, and Talkalai was a major part of the surge. But the Lady Scouts couldn’t sustain the momentum and fell behind at one point, 18-14. Monument Valley’s 9-1 breakout lead in the third game proved too much for the Lady Scouts to overcome.

“It was definitely defense that won for us,” Gilmore said. “We played well on offense, but defense did it for us.”

The Lady Scouts were not without their own offensive charges. Though the team continuously tried to set up junior outside hitter Desiree Nelson for kills, the Lady Mustangs were simply too stingy at the net and mid-court for Window Rock to make inroads.

In the second set, Window Rock showed a lot of grit at getting early and late leads. Nelson put the Lady Scouts up 2-0 at one point with a tip shot at the net. Sophomore middle hitter Melicia Nelson helped with positioning teammates for shots.

The Lady Scouts were able to keep the versatile Yazzie in check in the second and third games, only to see Maiava step up, especially at the net. The second game was tied at 11, but only for a short time because of the costly mistakes by the Lady Scouts.

Holtsoi has coached the Lady Scouts for more than 30 years.

Monument Valley went on to beat Page and Blue Ridge Oct. 12 and Oct. 16.

The Fighting Lady Scouts are the No. 2 ranking team in 3A North.They lost a double header to Tuba City Oct. 16.